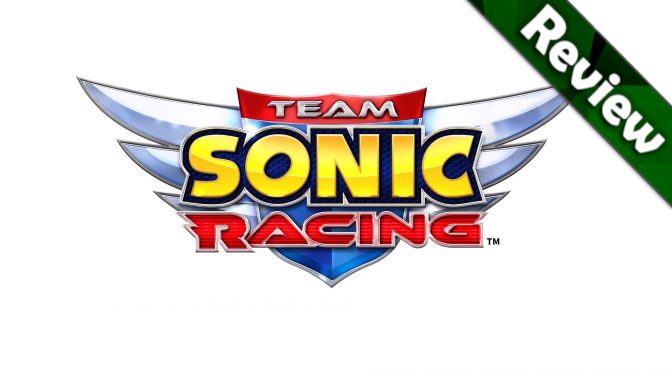 One of my favourite things in the gaming industry is the rivalries between mascots. Sam Fisher has Solid Snake, Duke Nukem has Serious Sam, Nathan Drake has Lara Croft, and, of course, Sonic has Mario. While their respective fan bases might get a little… passionate when you challenge their loyalty, the competition that these mascots have created always pushed studios to make some great games.

I therefore think Sonic has every right to star in a kart racing game even if ‘The Blue Blur’ could theoretically outrun all the karts and then some. To me, a Sonic kart racer is a salute towards the long-standing duel between Sega and Nintendo trying to one up each other. While many other kart games tend to feel like a knock-off of Mario Kart, Sega’s attempts have always felt like proper competition to Nintendo’s domination of this genre.

The PC has criminally slim pickings when it comes to the selection of decent kart games to choose from, and Team Sonic Racing represents a great choice. All the benefits that Nintendo fans have been enjoying for years can be found right here.

However, I was confused by one or two decisions made by Sumo Digital in light their previous game, Sonic & All-Stars Racing Transformed. When compared with its prequel, certain aspects of Team Sonic Racing just feel like a small step backwards.

Let’s get the nastiest stuff out of the way starting with this game’s biggest let-down: The plot. Indeed, here we have a kart racer where someone actually deemed it necessary to shoehorn a story into the career campaign. I have probably driven virtual karts almost as much as my actual car, and I have never felt that the experience would be enhanced by, or even needed, a story.

The narrative plays out within cut scenes between races where characters speak to each other in a speech bubble JRPG style. Basically, a tanuki, named Dodon Pa, holds a huge racing tournament for the friends and foes of Sonic. He needs to examine how well groups can race together in order to develop an engine that runs on the power of… teamwork.

That’s right, teamwork. As a surprise to no one, Doctor Robotnik/Eggman joins in on the action with the ultimate plan  of stealing this extraordinary new engine. It’s up to Sonic to protect his friends, and thwart the plans of the rotund mad scientist. Again. However, I have no idea why Doctor Eggman wants this engine so bad because he hasn’t got friends anyway.

I can usually turn a deaf ear towards the cheesy dialogue in Sonic games, but the exchanges in Team Sonic Racing’s story are like an explosion in a cheddar store. Which nine-year-old was tasked with writing their lines?

It becomes utterly cringe-worthy at times, and this represents the final nail in the coffin for a story that should not have been told in the first place. The plot contributes virtually nothing to the game, and I have never been this grateful for a skip button.

A prickle of hedgehogs

Despite the story making a flub out of introducing the notion of teamwork, Team Sonic Racing’s main selling point is still that you can now race with other people on the track. Whether it be couch co-op or online, the emphasis here is racing as your own little squad in a style that might seem very familiar to fans of Need for Speed: Carbon.

What you can therefore expect is a lot of slip-streaming, helpful shunts, as well as sharing power-ups with your team so that your overall positions can contribute to the win. It really does not matter who crosses the finish line first since this game is all about adding up score to win as a team. This was a nice touch since I feel like other team-based racing games still emotionally blackmail you, player 1, to cross the line before the rest of your squad. Didn’t their mothers ever teach them there is no ‘I’ in team!?

Sumo Digital have therefore added a cool twist into how a multiplayer game can function in kart racer, but they also used the opportunity to make one type of vehicle play quite different from the next. The ‘technique’ kart types, driven by characters such as Tails or Silver, drift just a tad more easily around the corners, while the ‘speed’ type cars of Sonic and Amy achieve a higher top speed. The ‘power’ type vehicles of Knuckles and Big, on the other hand, are a bit more sluggish, but they are far less affected by knocks, and boast higher boost speeds.

You can really feel the difference between them, and each type of kart encourages a slightly different play style. Players that really want to dominate the competition in a tactful way will combine the strengths of the karts in their squad, but thankfully the AI also make equally good racing partners.

Further encouraging the notion of team work is of course the ‘Team Ultimate’ power-up. Much like the ‘All-Star’ ability in Sonic and All-Stars Racing Transformed, this power-up grants you and your team invulnerability on the track, as well as a substantial boost in speed. The only way to obtain this elusive beauty is by doing the team-based activities I mentioned above, which in turn fill up your Team Ultimate meter. This was a life saver on some of the harder difficulties, and a rewarding way for SEGA to push the new mechanics introduced this game.

Nevertheless, let me assure all the lone wolves out there that Team Sonic Racing offers every race mode in both team and single-player options. In single player, the game takes on the more classic style of kart racing, and with medals and cosmetic unlockables to earn, solo mode often had me playing until late at night.

One step forward and two steps back

It was surprisingly good relationship therapy to play a kart game with my girlfriend in cooperation for once, so the team racing aspect is certainly an interesting new addition. Yet, as a huge fan of Sonic and All-Stars Racing Transformed, I immediately noticed that Sumo Digital had omitted a few things that really defined Sonic kart games.

The most obvious omission is the removal of vehicle transformation, where the kart changes into a plane or boat depending on terrain. In Sonic & All-Stars Racing Transformed tracks felt far more vertical and exciting with this mechanic, and considering that Mario Kart 8 has also jumped on the anti-gravity bandwagon, I have to wonder why it was omitted in the latest Sonic kart racing game. In the absence of this, the tracks in Team Sonic Racing sometimes feel slightly plain and closer to older kart games. 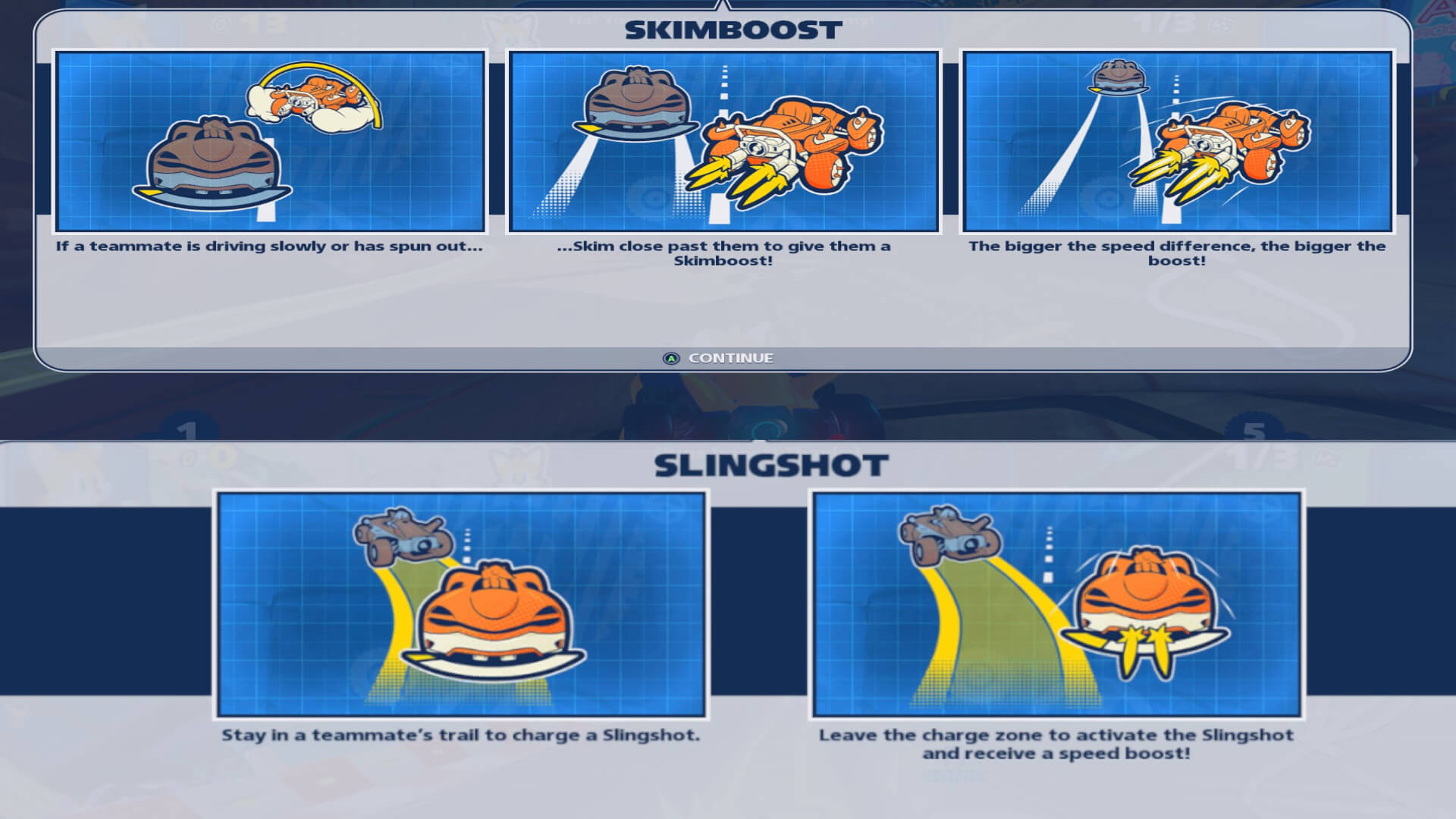 I also have doubts about using wisps (remember Sonic Colours?) to symbolise power-ups since it took some memorisation to learn their purpose. For example, you pick up a white wisp, but what does it mean? Is it a projectile? No it’s a boost. Okay now a blue one. Is it a shield? Nah-ah, it’s a block.

While you instinctively remember their functions eventually, I should also note they failed to contribute to the gameplay as much as I hoped. In general, the power-ups feel a little ineffectual, and I gave mine to my team mates most of the time. Again, quite the opposite from how crucial power-ups have been in previous Sonic kart racers.

Lastly, I feel like certain time trial events come close to to being sadistically difficult. While it is really fun dodging between robots, collecting rings, or blowing up the maximum amount of eggpawns in a time trial, you have to be a really skilled player just to reach sliver medal in some of these mini games.

Platinum medal is only the privilege of the true samurai gods of Sonic kart players. While ‘git gud’ is perhaps applicable in this scenario, I don’t think I have ever played this hard just to get a silver medal, which seems much too excessive in a game like this.

Overall, Team Sonic Racing left me a little disappointed in a few areas mainly because I feel like Sumo Digital was really giving Mario Kart a serious run for its money at one point.  I feels as if their latest game made unnecessary sacrifices for the sake of the whole team racing-dynamic-thing, and I think Sumo Digital would be wise to reintroduce the more elaborate game mechanics in coming titles.

As it stands, I can still see myself returning over and over again to Team Sonic Racing for the rest of this year even if just for the tons of sweet kart mods to unlock, and many gold and platinum medals taunting me from the screen. This is an essential game for Sonic fans, and a lovely quantum of solace for the kart lovers feeling like their preferred games are growing a bit long in the tooth.