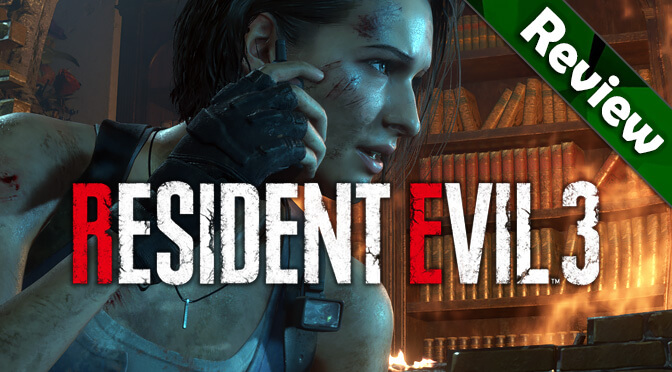 Resident Evil 3 (2020) is a glorified campaign expansion based heavily on Resident Evil 2 (2019). Most of the locations, items, weapons, and enemies reuse RE2 assets. Likewise, the engine, gameplay, and much more are borrowed from RE2.

What’s worse, so much is cut from the original 1999 game, and the actual story is very short. As such, RE3 would be a respectable experience at half-price, but the full-price cost is more insulting than ingratiating. Therefore, unless you’re a die-hard Resident Evil fan, wait for a half-price sale and then enjoy RE3!

Having already jumped to the conclusion, I suppose I should add a few more details for those who are still interested. First, you need to know that RE3 is actually two games. Quite literally, your purchase gives you two separate Steam games: Resident Evil 3 (the campaign) and Resident Evil Resistance (a curious 4v1 multiplayer mode with loot boxes and micro-transactions).

Let’s begin with what everyone cares about: the campaign.

Let me offer you an incredibly simple way of understanding the story experience: Resident Evil 3 is the Resident Evil version of Call of Duty. It’s good (if slightly dumb) fun for about 4 to 6 hours. There’s a constant energy, with a grab-bag of explosions, set pieces, dramatic talking, and mayhem. Once it’s over, there’s not much that lingers in your memory, but it’s an entertaining enough ride.

Now, it may sound like I’m not that enthused by the campaign, but actually I had a great time with it because I enjoy a nice Call-of-Duty-esque linear romp from time to time. Just understand: RE3 is not survival-horror like the beloved RE2. No, RE3 pushes your mind to the backseat and encourages you to run, crawl, dodge, duck, and weave through a much less sophisticated action version of RE2. You’ll even revisit several iconic locations from RE2, but this time you’ll be in-and-out in minutes, off to your next bombastic scene.

I have a confession: I’ve never played the original Resident Evil 3, so my review is purely based on my experience with this new incarnation. However, the internet tells me much content was cut from this remake. Missing locations. No branching paths. Limited costumes. A lack of story-flow. Absent game-modes. The list goes on.

Tying into the cut content is the limited replayability. There is only one linear campaign in RE3. RE2 gave us two campaigns, each having two unique paths for a total of four playthroughs. There’s nothing like this here. The campaign is exactly the same every time. [Correction: the two highest difficulties have ever-so-slight changes to enemy and item placement. This is nice but far too little, too late.]

On a more positive note, after you beat the campaign you unlock a ‘Shop’ store option where you can purchase bonus items for further playthroughs. These items are basically mandatory on the higher difficulties if you want to achieve the coveted S-Ranks via ultra-fast runs.

So how do you buy items in the store? You earn money by completing challenges related to Achievements and goals like ‘kill X enemies with X weapon’ or ‘finish the game under X time.’ The purchasable items themselves range from stat boosts to new tools to new weapons.

Overall, it’s a nice addition to a game that is starving for content, and ultra-obsessed players will likely put in another 10 or 20 hours replaying the campaign a dozen or more times to unlock everything. The rest of us will maybe attempt the campaign once or twice more (perhaps with a few user-made mods) before fatigue sets in.

RE3 performs basically exactly like RE2, so I’ll refer you to that review for the details. I’ll sum up by saying RE3 runs extremely well on PC and is a great, gorgeous port. I had no performance issues, although I did have to install a special codec to get the in-game videos to play.

I’d give kudos to Capcom for another technically-fantastic PC game, but RE3 is basically a reskin of the RE2 engine. So good job not breaking anything?

As if the corporate suits at Capcom felt some twinge of guilt at charging full-price for what is clearly a limited product, they’ve thrown in a ‘free’ 4v1 multiplayer mode to perhaps trick encourage people into buying an overpriced product. The problem is we have a glut of other free multiplayer games like Call of Duty: Warzone, Apex Legends, and Fortnite. So a tacked-on product like this just isn’t good enough in the year 2020.

That being said, Resistance does have some truly inventive ideas to it, and I found myself intrigued by the depth of strategic options in each session. Indeed, if the stars align and you get a great group of players, there’s some very solid enjoyment to be had. I could see Resistance being a ‘cult classic’ game for LAN parties and other organized events.

However, most of the time the 4v1 gameplay fairs exactly how all 4v1 games tend to go: unbalanced, messy, and awkward (anyone remember Evolve?). Oh, and there’s often long queue times to get into matches. Oh, and the matchmaking is peer-to-peer because of course it is, so quite often you get ‘Unstable network connection’ warnings and dropped games. Oh, and there’s loot boxes and micro-transactions tied into a pay-to-get-an-advantage equipment system.

Ultimately, Resistance is a worthy concept ruined by far too many issues, so the game is best…left for dead. Then again, if you like the idea of unbalanced gameplay, micro-transactions in premium-priced titles, and unstable multiplayer connections, perhaps Resistance is the Resident Evil horror you’ve been looking for!

It may seem like I hate Resident Evil 3. I don’t. I actually quite enjoyed my time with the campaign and am enjoying another playthrough. What I hate is the business decision to overcharge for something that should have been a half-price expansion.

Shoot, even Activision recently released the remastered Call of Duty: Modern Warfare 2 campaign for only $20 USD. So it’s not good enough to give us scraps but charge us like we’re eating a full course meal.

I recommend to pick up the game when it goes on sale down the road and indulge in the short but enjoyable campaign, knowing that you’ve not given in to what seems to be a Capcom cash-grab.

There’s so much more I could share, but that’s all I have to say about Resident Evil 3. End of review… What? Are you surprised it’s already finished? Are you thinking, “Shouldn’t there be more stuff?” Well, now you know what it’s like to play 2020’s Resident Evil 3!

Playtime: 10+ hours total. Nick spent 6 hours finishing the campaign. Another few hours have put put into a second playthrough. A couple hours were thrown into the Resistance multiplayer game (until enough connection issues put an end to the fun). Nick will likely put another 10 hours or so into some modded playthroughs just for the fun of it.