Resident Evil 3 Remake is the latest RE game from Capcom that has been recently released. Powered by the RE Engine and supporting both DX11 and DX12, it’s time now to benchmark this game and see how it performs on the PC platform. 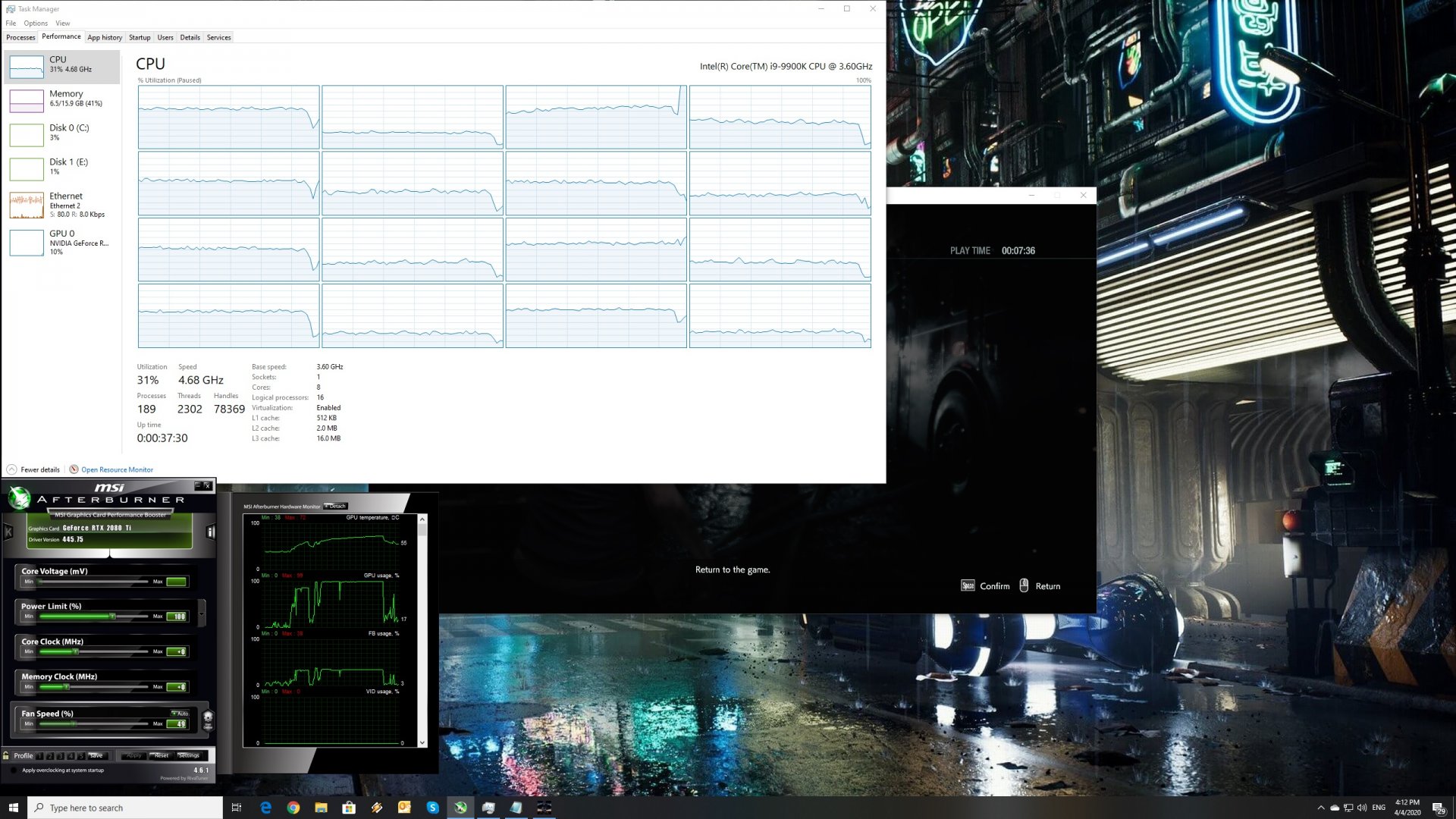 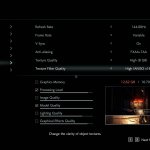 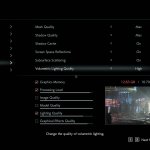 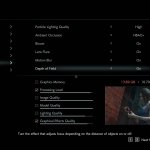 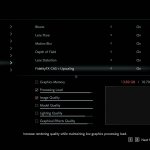 In order to find out how the game scales on multiple CPU threads, we simulated a dual-core, a quad-core and a hexa-core CPU. And, as we’ve already said, Resident Evil 3 Remake supports both DirectX 11 and DirectX 12. Now here is something really interesting here. Resident Evil 3 Remake depends heavily on the number of available CPU threads. When using more than six CPU cores/threads, the game runs better in DX12. With less CPU threads, the game runs faster in DX11. For instance, when we tried the game on our simulated dual-core system (with Hyper Threading enabled), we experienced major stuttering issues in DX12. When we switched to DX11, most of the stutters were gone and we were able to run the game. Therefore, make sure to enable Hyper Threading for this title in case your CPU supports it. 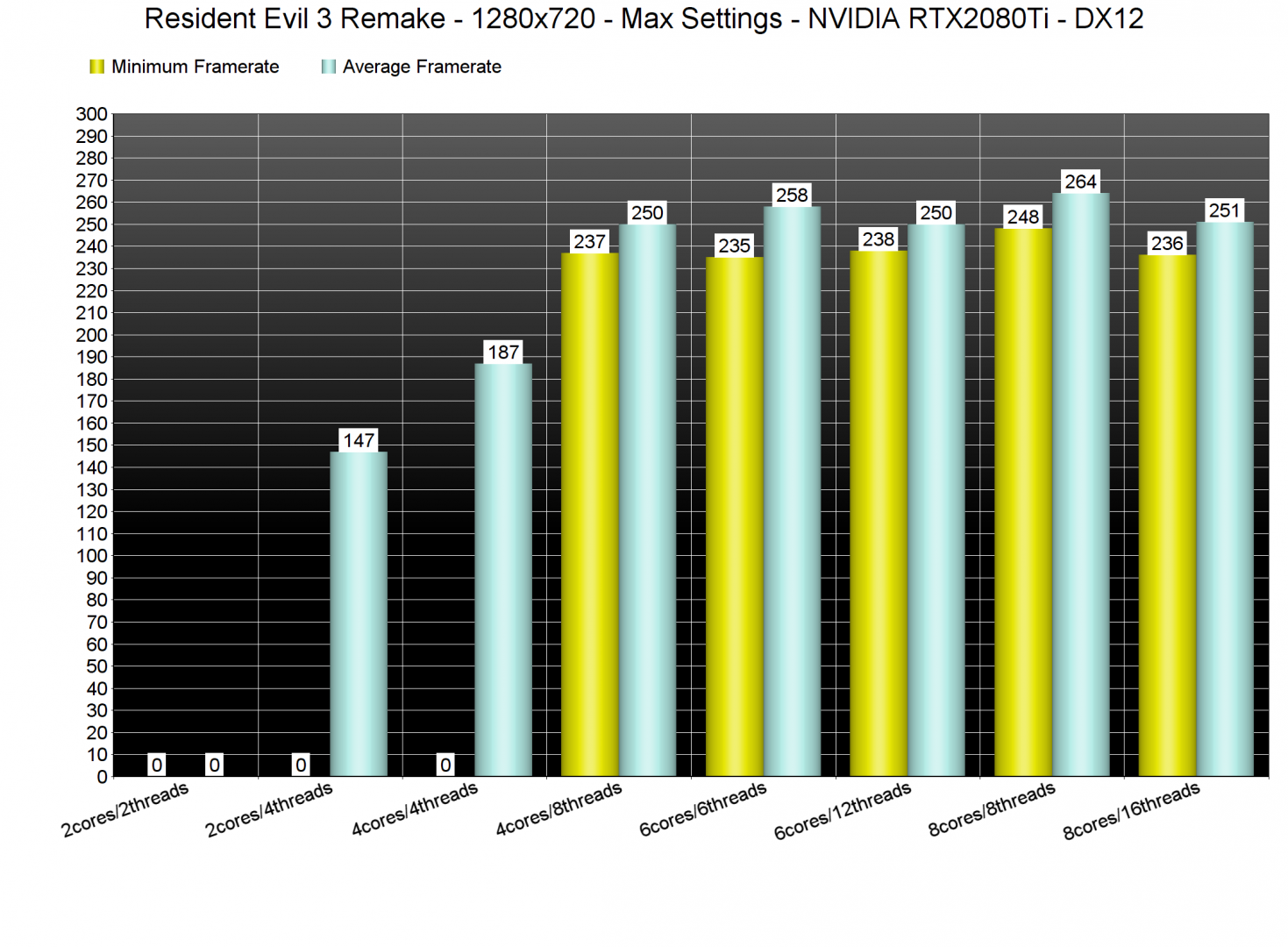 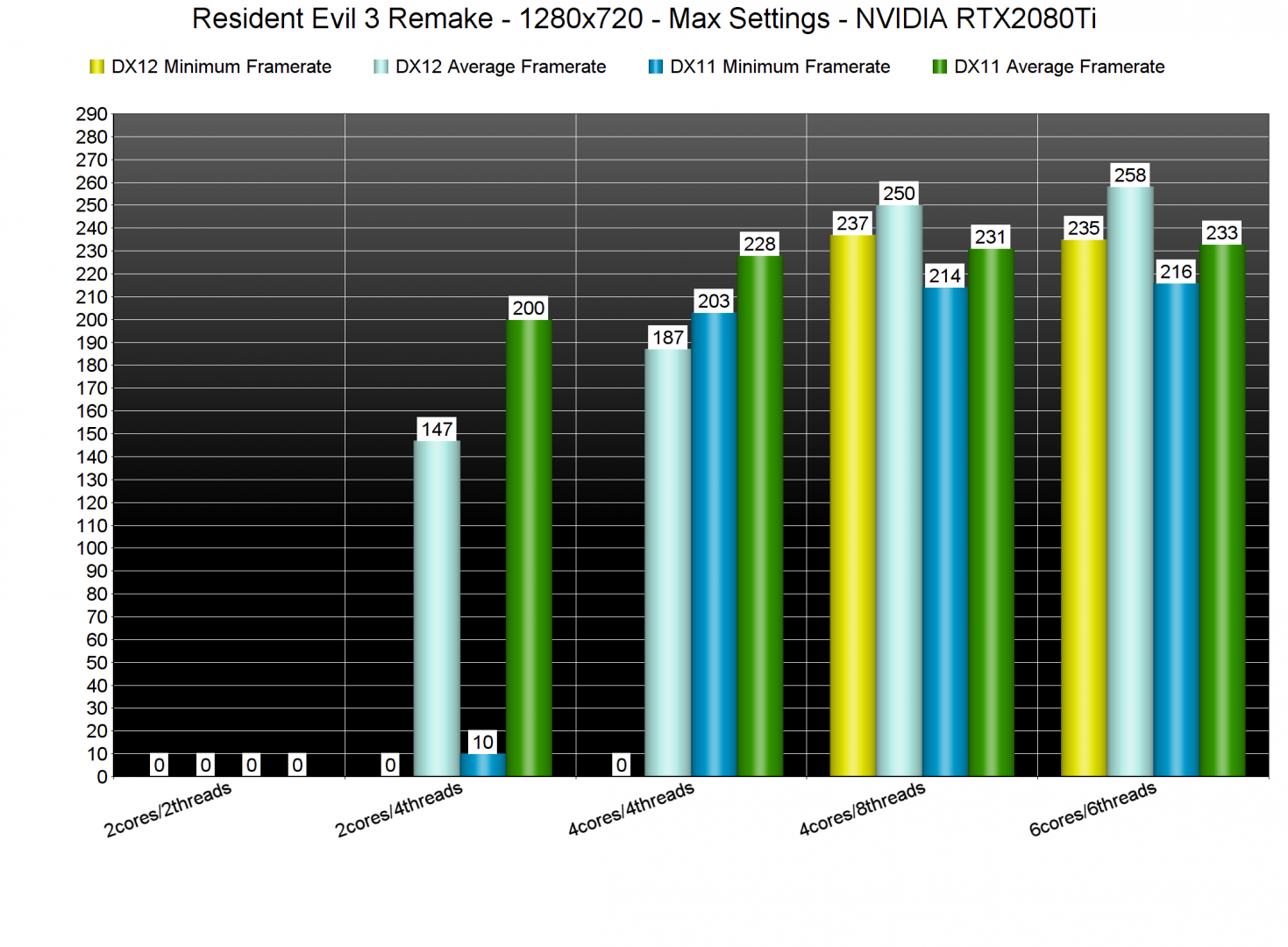 For what it’s worth, both our Intel i7 4930K and our Intel i9 9900K were able to run the game in DX12. Let’s not forget that the i7 4930K has twelve threads. Moreover, and even at 1080p, there weren’t any performance differences between these two setups. 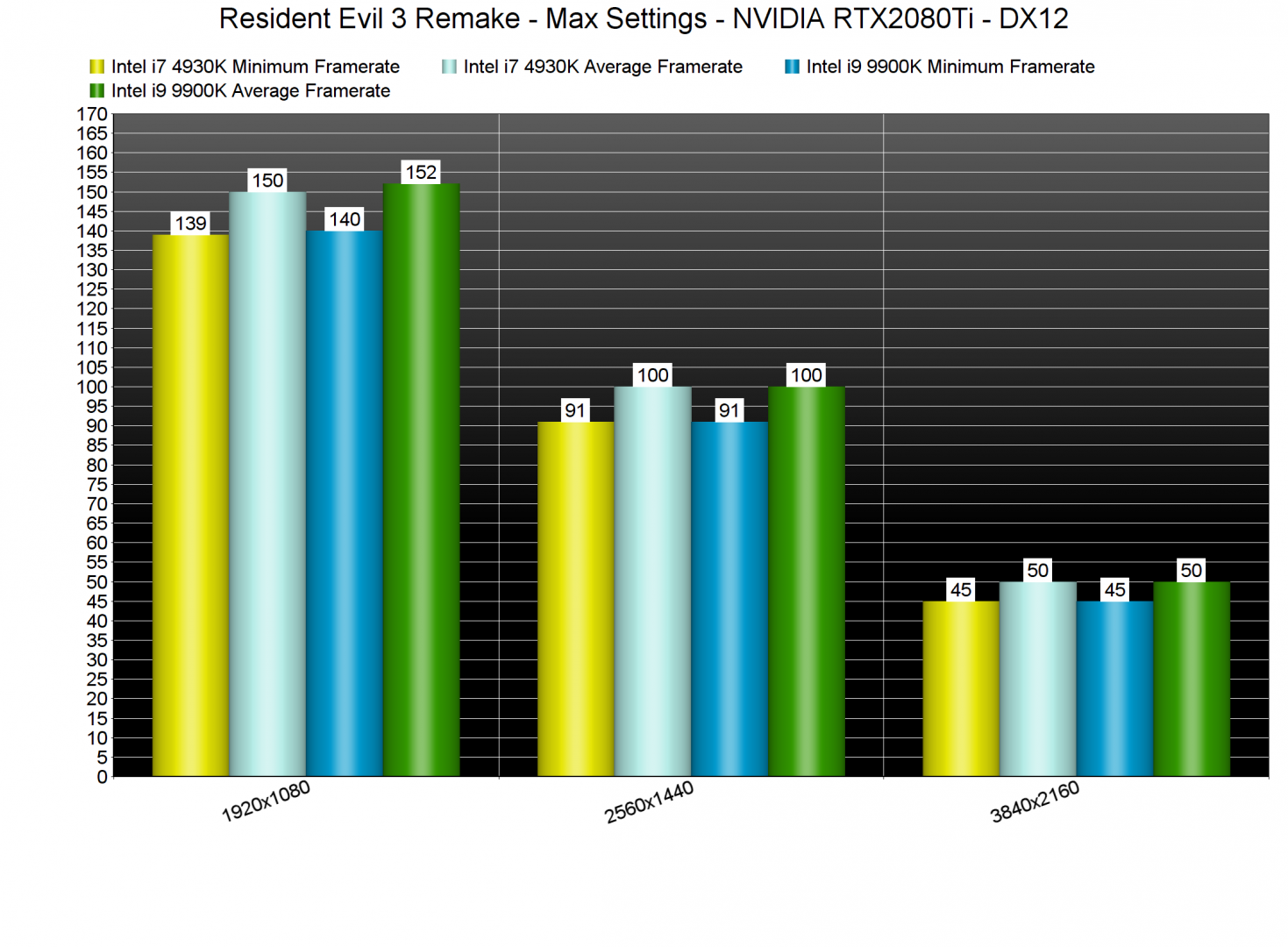 On a high-end PC system, DX11 can noticeably decrease performance. Below you can find some comparison screenshots between DX11 and DX12. As you can see, our RTX2080Ti was underused in DX11. Our guess is that this behavior is mainly due to a draw call/driver overhead.

At this point, we should note that the game does not come with any built-in benchmark. As such, we’ve contacted our very own benchmark during one of the game’s most demanding scenes. This scene is when Jill and Brad Vickers encounter a swarm of zombies. Thus, consider our benchmark as a stress test/worst case scenario benchmark. 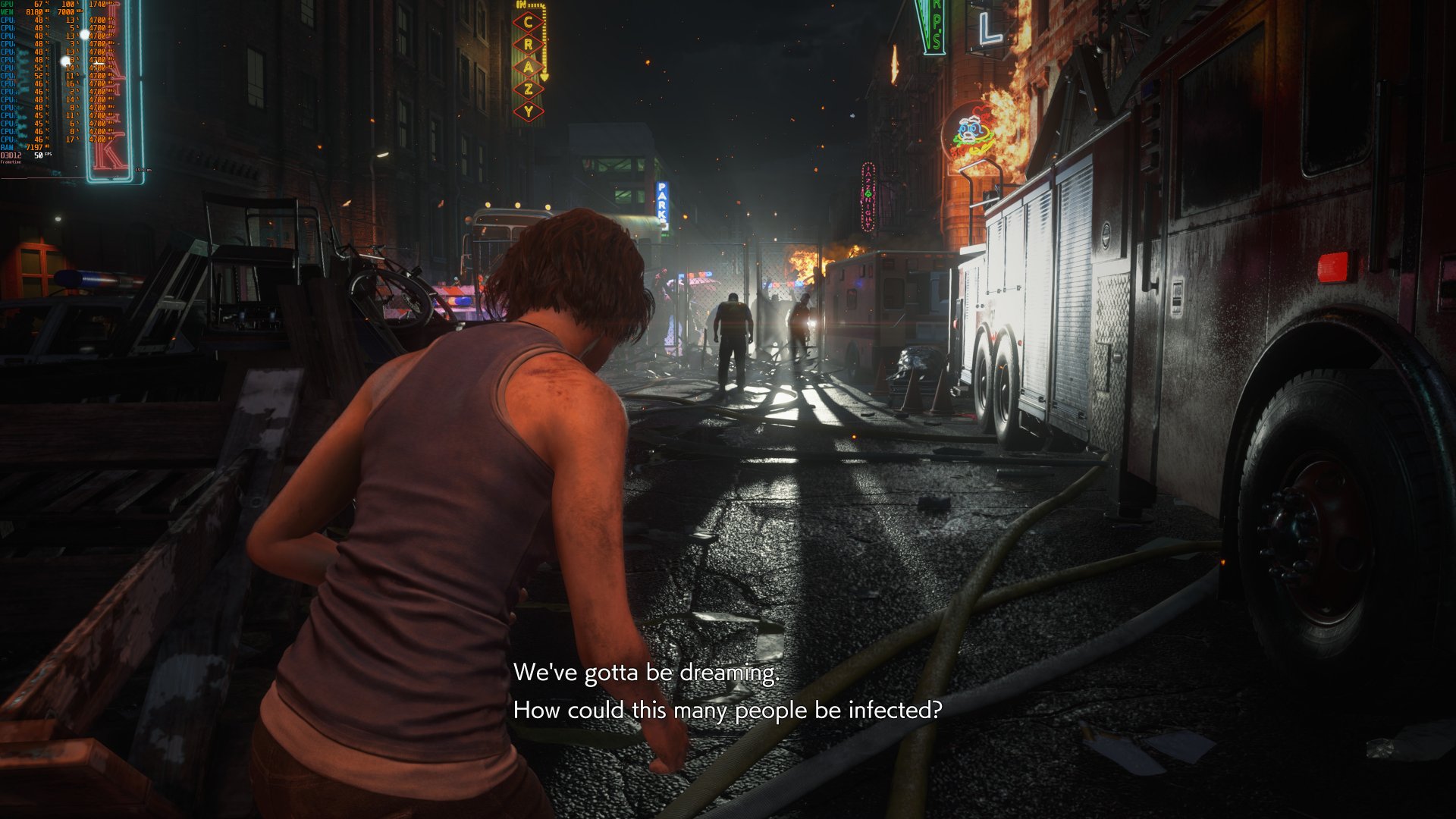 In our stress test, our AMD Radeon RX580 was simply unable to provide a smooth gaming experience at 1080p and on Max settings. This particular GPU pushed a minimum of 50fps and an average of 53fps. Again, this is a worst case scenario, meaning that there are other areas that run significantly faster than it. 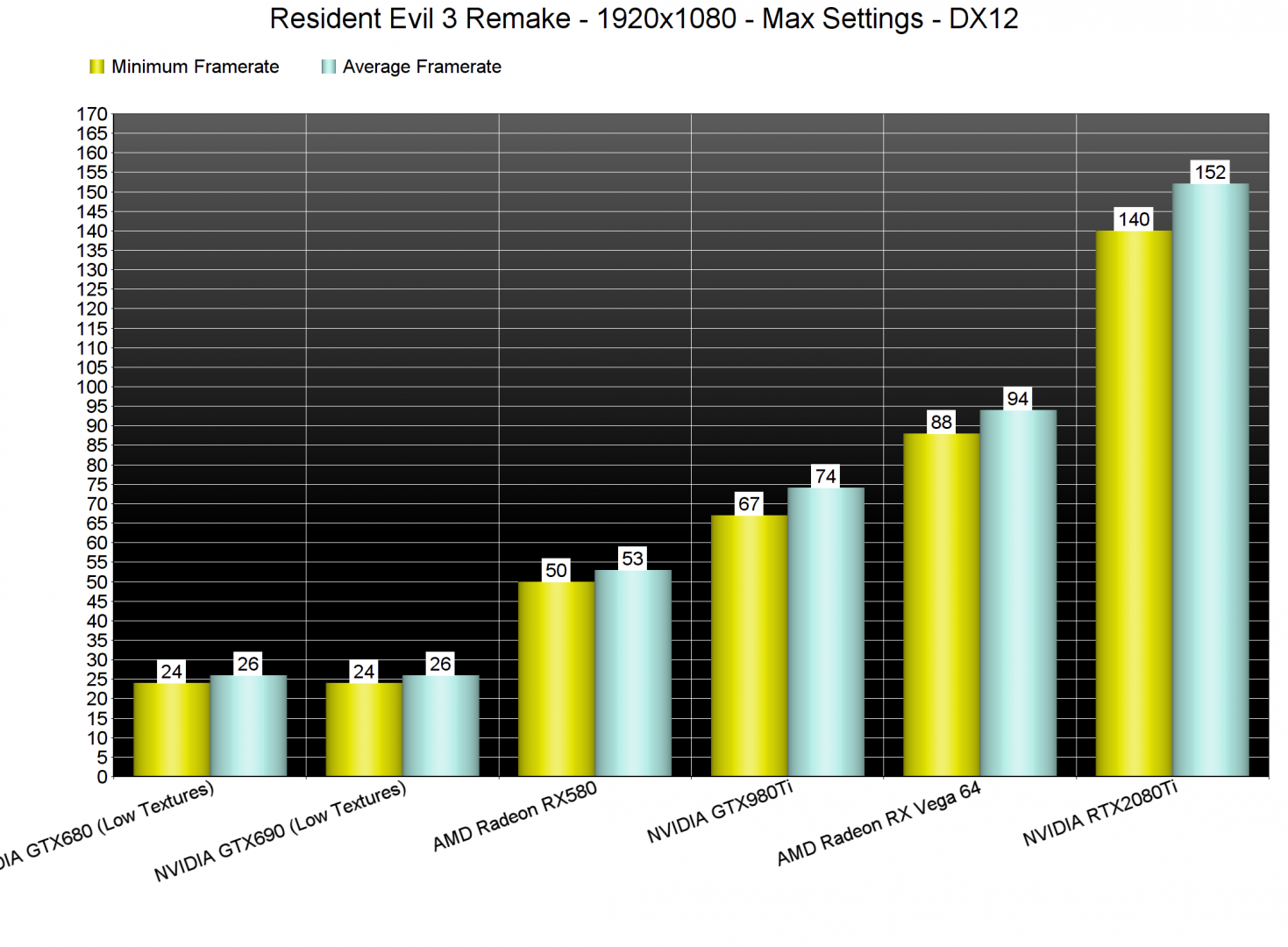 At 2560×1440 and Max settings, the only GPU that was able to offer a constant 60fps experience was the RTX2080Ti. The AMD Radeon RX Vega 64 came close to it, though there were frequent drops to 55fps. In 4K, there wasn’t any GPU that could run our stress test with constant 60fps. Still, the RTX2080Ti was able to offer a smooth gaming experience at 3328×1872. 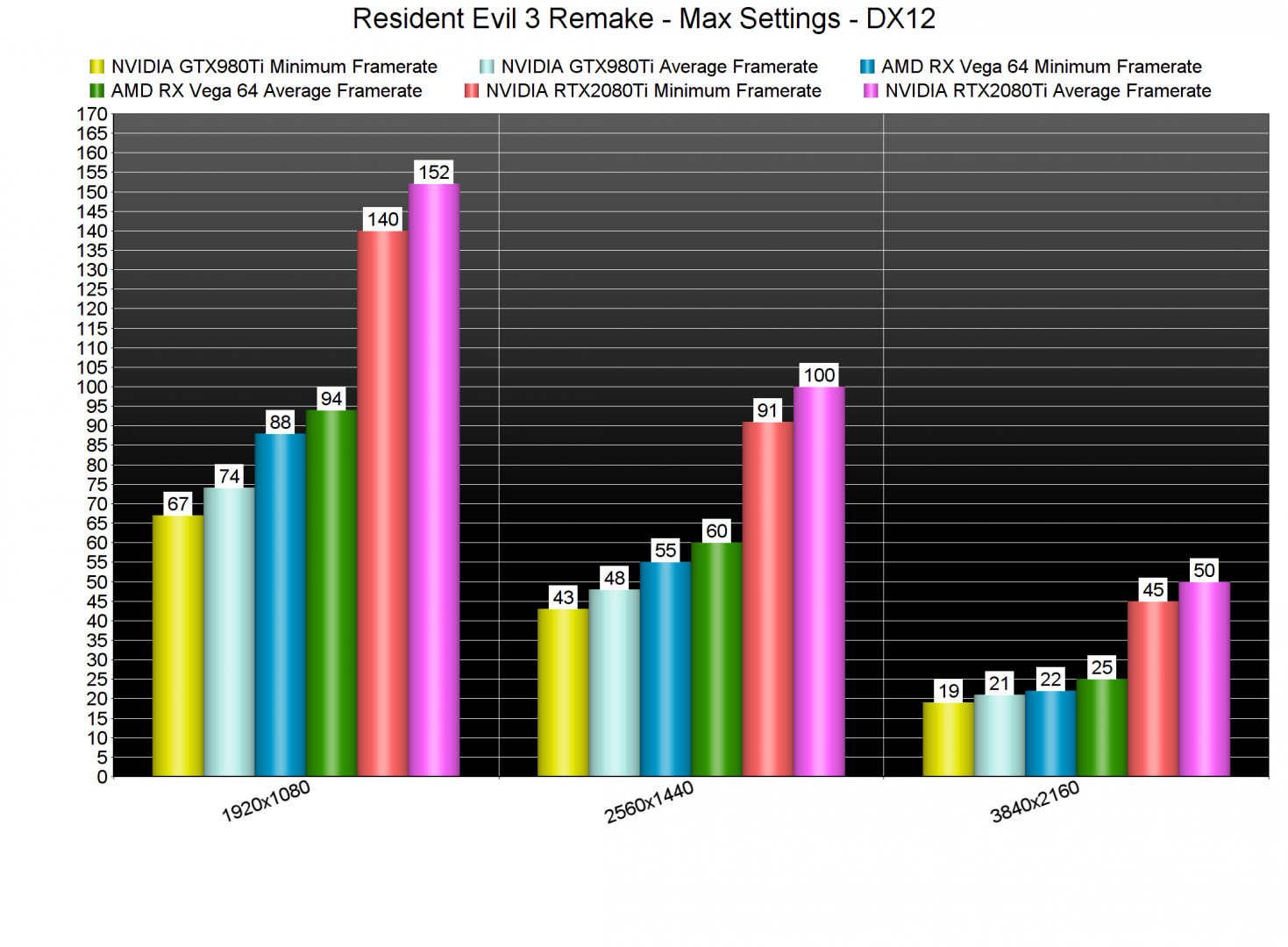 Graphics wise, Resident Evil 3 Remake looks great and definitely justifies its GPU requirements. Truth be told, there are some graphical similarities with Resident Evil 2 Remake. Despite these similarities, though, Resident Evil 3 Remake looks better. All of its characters are highly detailed, and there are some pretty huge explosions. The volumetric lighting effects are also great, and there is a mod that can unlock the 30fps animations of distant zombies. Most of the textures are also of high-quality. Our only gripe with the game’s visuals are its “pixel-y/noisy” reflections. Unfortunately, Capcom has not improved them and they look as noisy as those in Resident Evil 2 Remake.

All in all, and thanks to both DX11 and DX12, Resident Evil 3 Remake runs great on the PC platform. Owners of CPUs with less than six threads will have to use the DX11 API. On the other hand, owners of CPUs with more than six threads can use the DX12 API. From what we’ve seen, Volumetric Lighting can have a big performance hit, so make sure to lower it in case you encounter performance issues. And, for the most part, an AMD Radeon RX580 is enough for gaming at 1080p/Max settings. We also did not experience any mouse smoothing or acceleration issues.