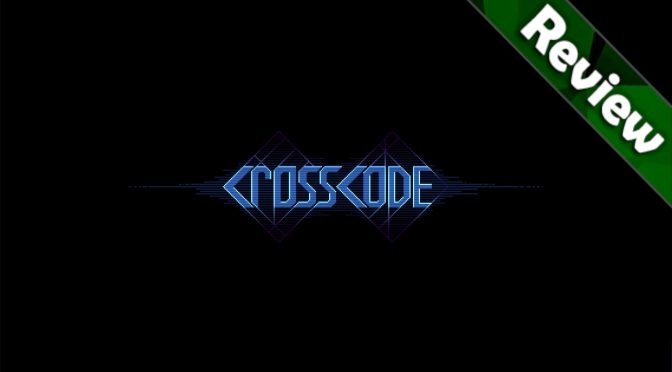 The international launch of the Super Nintendo Entertainment System in 1991 was a watershed moment in the evolution of video games. While Nintendo already had a respectable roster of exclusive intellectual properties from their 8-bit years, it was the SNES’s jump to 16-bit that memorialised their most influential mascots in our childhood memories.

In addition to hosting some of the most creative minds from the early industry, the SNES represented something of a masterclass in how make established gaming franchises look and sound even better. The doors to new technological frontiers of storytelling were suddenly blown wide open, and voila!: The golden age of Japanese role-playing games had arrived.

In fact, no other console from the early nineties received more JRPG releases than the SNES, and it was effectively the platform that jump-started international recognition of the genre. Still, we must not forget that most of these fully-fledged RPG experiences were  made from little more than sprite-based graphics accompanied by 16-bit sound. How on earth could games that defined an entire generation’s childhoods come from what is, in retrospect, such a humble aesthetic framework?

To understand why, we need look no further than an indie treasure currently making fans of retro-JRPG’s pick up their jaws off the floor. That game is CrossCode, and it is a strikingly authentic homage to the look and feel of the classic, SNES JRPG’s on just about every conceivable level. I will spoil this review by saying, up front, that this game is a masterwork – maybe the best I have played in the last decade.

This indie gem is the love  child of a seven year developmental journey for a studio based in Saarbrücken, Germany, named Radical Fish Games. The team was quite transparent about the process as lead developer, Felix Klein, would occasionally stream live videos of himself coding sections of the final game. Now if THAT does not attest to the importance the studio placed on making players feel involved in the game’s overall outcome, I’m done trying.

The game’s plot is really meta, even by JRPG standards. You play as Lea, or perhaps more specifically, you take control of Lea’s blue-haired avatar inside a fictional MMO named ‘CrossWorlds.’ See, Lea has experienced the onset of amnesia, and the supporting characters helping her find her lost memories believe that the answer lies somewhere in her past adventures in CrossWorlds.

Aside from not being able to remember anything, Lea can barely speak due to a glitch in connecting with her avatar. Her limited responses from a handful of single words like “Hi!” or “Lea” are all that separate her from essentially being a mute protagonist. Still, the NPC’s don’t seem to mind, which, as reviewer Khee Hoon Chan observed, is something of a subtle satire on the awkward dialogue typical of MMO games.

Things get more complicated with the arrival of the Blue Avatar who seems to recognise Lea upon their first encounter. He is a dangerous enemy with powers that exceed the other players in CrossWorlds . Most unfortunately, he appears to be the only person that knows what happened to Lea’s memories, and much of her adventure involves finding out the Blue Avatar’s secret knowledge.

For what Lea lacks in words, she can compensate with fisticuffs as she is a spheromancer – a unique class of avatar capable of dishing out both melee attacks (with a set of Tron-esque disks), and firing spheres of energy at long range. The combat takes place in real time and Radical Fish Games cite the Zelda games as key influences in this case, but I clearly detect some of Secret of Mana in there as well.

With these basic premises in mind, the classic JRPG hullabaloo then follows suite. Players will proceed through different landscapes, town hubs and temples (the game’s version of main dungeons) picking up quests and thrashing their way through monsters. You make some quaint friends along the way of course, who will eventually become your party members capable of accompanying Lea during fights and exploration. 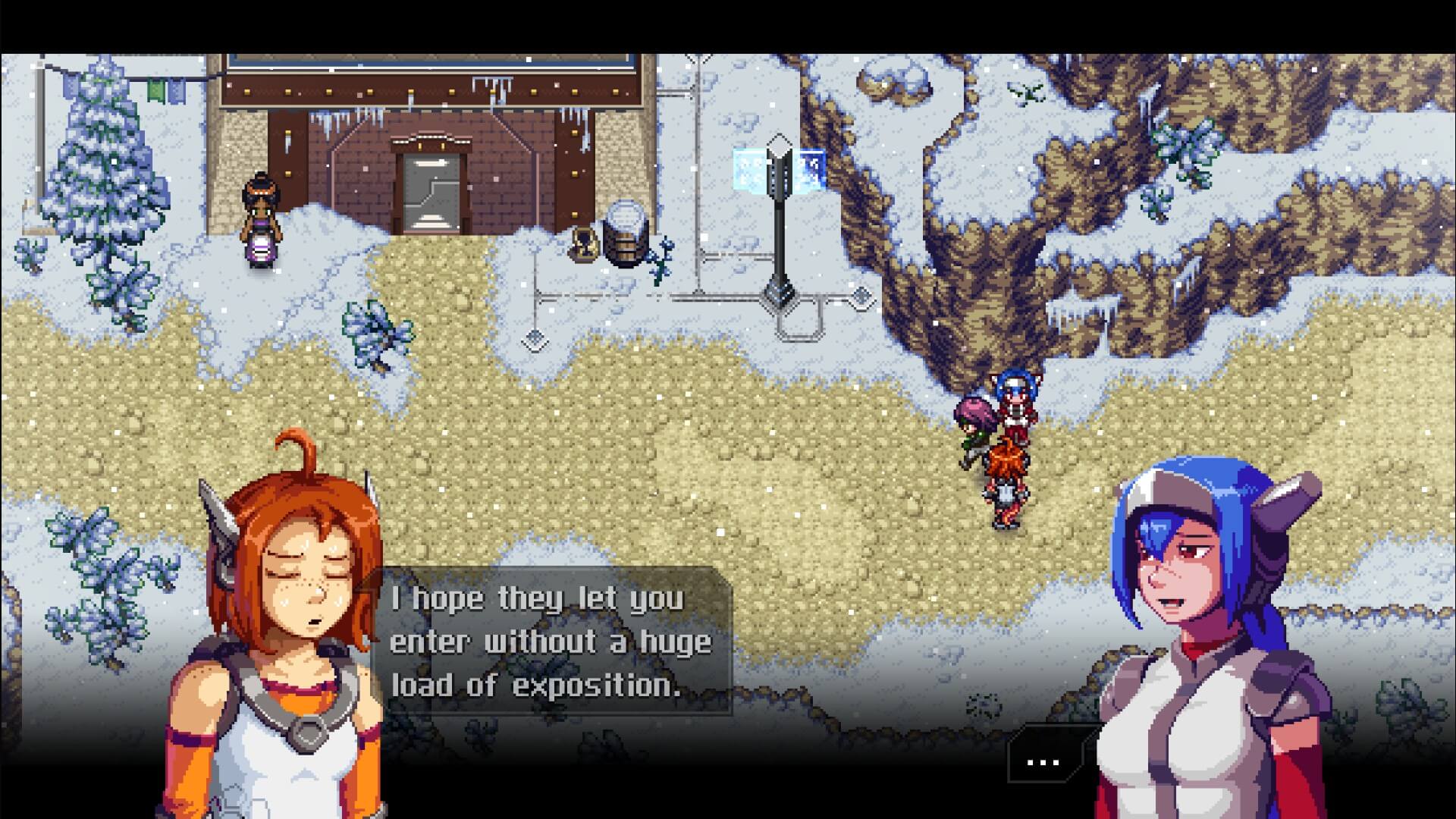 True to the tradition of many early JRPG’s that form CrossCode’s source material, this game is a sprite-based, 2D epic with dialogue conveyed by text bubbles alongside an animated bust of the character. The conversation and banter between characters have been written really well, and their dialogue does a great job at revealing  their personalities to the player.

I laughed quite a few times at Lea’s expressions of displeasure and confusion as she encountered some of the more weird NPC’s throughout her quest. Yet, there were also softer and more dramatic moments that really made me feel for her struggle at the time. All of these complexities made her extremely likeable as a protagonist, and it adds a surprising layer of depth to this game’s story.

Not unlike the JRPG’s of Nintendo’s heyday, the game depicts that unmistakable beauty you get from representing detailed scenery in pixelated art. It is a visual style that reinvigorates the bygone days in which JRPG’s found their market, and it exists as an excellent opportunity to introduce this visual style to a new generation of gamers.

The fluidity of the animation also ensures that combat encounters deliver highly responsive combos that you can even delay with hit-cancelling if you choose to pummel your enemy with a flurry of blows before delivering a finishing move. It is an astoundingly robust system for a game of this kind and always felt SO GOOD!

Not convinced? Well, I will raise you one of the most engaging skill trees I have seen in years. Here the player is given access to a wide variety of Lea’s other special abilities or perks that can be unlocked or swapped out with XP. Once the player beats each of the four temples, her abilities are even granted additional, elemental finishing moves that can make the whole screen tremble when unleashed.

While Lea wields the same weapons throughout the entire game, the player can trade various bits of loot for weapon upgrades, or even foodstuffs that yield boosts. Specifically, her disks, boots, torso and headgear can take on upgrades that offer a variety of perks. Their effects even stack up, and choosing the right combination of gear often turned the tide in several fights.

Aside from the combat, another area where CrossCode really shines is in the mind-bending environmental puzzles. They are everywhere, but thankfully each puzzle is unique and brilliantly designed to the point where they represent a pleasant challenge.

For instance, some require you to hit an inaccessible target by ricocheting Lea’s spheres on slanted surfaces, while other puzzles involve moving things around to create a path for reaching an object. Honestly, they remind me a bit of the Riddler puzzles from the Arkham Batman games since the skills and tricks you need to use for their solutions are usually relatively apparent, but never easy.

As if the actual puzzles were not enough, each area in CrossCode plays much like a mini platforming level in itself when you start exploring for collectables. This is my favourite aspect of this game, and if you really want to appreciate the genius that went into the overall level design, I highly recommend watching Game Soup’s dedicated video from when the game was still in beta.

In short, they explain the challenge of adding exploration into a 2D world lies in how the map becomes limited by the flat perspective. There is only really up, down, left, and right, with stairs occasionally adding an illusion of depth in some cases. Radical Fish Games, however, have actually managed to endow their game scalability in a way that would have been impossible on older hardware.

CrossCode adds a sense of height by shifting the game to a slight isometric perspective. Maps therefore have ledges and areas that are truly ‘above’ the protagonist. The opportunity to place treasures and items in these areas has not been lost by the developers, and finding your way to these rewards is often better than the prize itself.

In my own play through, I often saw a treasure box tantalising me from high up on a ledge. But how to get there? Well, there is a climbable gap right above the waterfall, which I can reach by jumping down from the ledge by a shrub, which in turn is accessible if I use the jump pad. The jump pad is activated by hitting a series of beacons in rapid succession. So I will start with the puzzle and work my way from there. I am an undisputed genius. Nobel prize in the mail please.

I should probably mention that this game can get rather difficult to the point where some players are mockingly using the phrase (and I am sorry about this) ‘CrossSouls.’ When you miss a jump, the game will generally just respawn you on the nearest ledge and dock off a few health points. Fighting, however, is a fast and furious affair where I often had to take a breather and put my thinking cap on.

This should by no means be a deterrent since the game’s difficulty, while tough, never really spills over to become punishing. CrossCode gives the player an impressive set of strategic tools that they can customise and experiment with until you can gain the upper hand on enemies. The comparison to Souls games is therefore apt (as much as I hate to admit it) in that this game wants to provide a true sense of accomplishment when you become adept with Lea’s combat abilities.

I could go on and on about the brilliance that has been invested in this game, but I shall rather summarise my view since I will keep returning to the same point: CrossCode is phenomenal because every minute of this game feels interconnected and cohesive. Whether it was doing quests, fighting or exploring for treasure, there were always several layers of gameplay instantly available at my fingertips.

CrossCode is what you get when you take the best JRPG you can think of and strip away all its excess fat. It takes everything about these long, character-driven journeys that we have come to love since the SNES’s dominance on our square televisions, and distills it into something pure and uncomplicated. It was clearly made by developers who share a deep love and passion for these kinds of games.

I give this game my fullest, most enthusiastic recommendation, and if you have ever dared to call yourself a gamer, there will be a gaping hole in your cultural background if you don’t at least check out the demo. After spending hours and hours joining Lea and her quirky companions on her quest for memories, I continually feel rewarded at every turn.