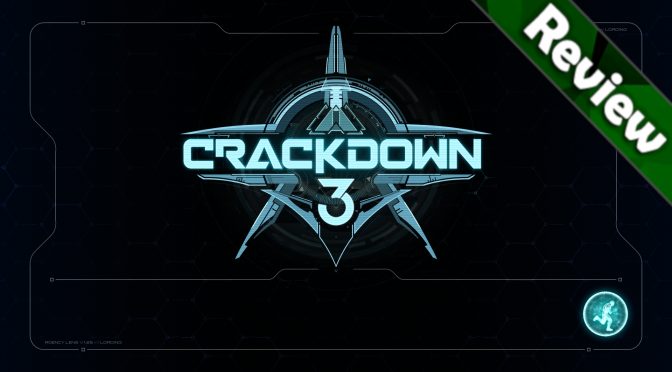 The past months paint a bleak picture of the high-budget gaming scene following a frighteningly long list of disappointments. Players finally got their hands on the games that have been stimulating their salivary glands for months – or even years – since their announcement, yet the final products only seemed to widen the chasm between publishers and us as consumers deeper and deeper.

It soon became apparent that long-time fans of Microsoft’s much-loved, Crackdown IP have come to regard the third installment as just another recent release that missed the bar in terms of expectations. In light of all this, I found myself installing my review copy of Crackdown 3 with a sense of trepidation.

Adding to my dread was that I have never played any of the previous installments, which automatically ruled out all sentimental attachment I may have felt for the series as a whole. To my surprise, Crackdown 3 turned out to be one of those games that I think was judged perhaps too harshly .

I am not saying that long time fans have no reason to be disheartened; it has been nearly nine years since the previous game after all. However, as a player experiencing Crackdown 3 in isolation from its roots (and with curbed enthusiasm), I really had fun with it. The game has no ambition to be original, nor does try to convey a compelling narrative, but it does offer a hearty sandbox experience that never tries to overreach itself.

The game plays out in a world where super criminals have given rise to super mercenaries for hire thanks to an organisation simply called ‘The Agency.’ With the power of cybernetic and genetic enhancements, The Agency created a new age of peace keepers where a single ‘Agent’ can represent the military advantage of a one man army. As in the previous two games, The Agency has once again been summoned into a metropolis (called ‘New Providence’ this time round) where the power of corrupt bureaucrats has grown beyond the control of the law.

In Crackdown 3 the focus of corruption lies within a super corporation named ‘Terra Nova,’ and it is up to Terry Crews… I mean Commander Jaxon and his squad to overthrow the establishment from within. However, the goal is not to kick down the front door and open fire on the person sitting behind the desk. Instead, Terra Nova must be destroyed using the one, true antidote for tyrants: Anarchy.

As such, the player will spend their time unleashing all manner of hell on Terra Nova’s processing facilities, freeing the local resistance militia, and recapturing outposts all while mowing down masses of thugs. In a style that is virtually identical to Middle Eath: Shadow or Mordor/War, the commanders of each division will emerge to face you head-on once you have caused a big enough ruckus, which makes for the perfect opportunity to strike. If the player manages to eliminate all of the second-tier baddies, the time will eventually come to move against the head of Terra Nova itself.

That weird feeling of Déjà vu

Shadow of Mordor/War is not the only book that Crackdown 3 has borrowed a few pages from. In fact, virtually all of the gameplay mechanics will feel extremely familiar to anyone that has so much as touched a sandbox or open-world game in the last ten years. Fans from Saint’s Row, Grand Theft Auto, Infamous and even Far Cry will all stumble upon something they recognise instantly within Crackdown 3’s gameplay mechanics.

For me, the most obvious pedigree would have to be Just Cause 3 both in terms of how the game plays, and equally within the structure of the objectives. Crackdown 3 similarly puts you at the edge of the game’s world, and lets you tackle goals and activities in any order of your choosing. The player can spend an hour blowing up chemical plants (manufacturing a green goop called Chimera), and then switch freely to liberating resistance soldiers for a bit of additional support against the pesky local militia.

All that matters is results, and I never felt pressured to focus on one particular set of chores. Yet, the thing is, I can list so many other games off the top of my head playing to the very same beat, and this is perhaps Crackdown 3’s biggest weakness. Instead of being the stylish, next-gen, sci-fi epic that would be a more authentic continuation of 2010’s Crackdown 2, this game’s strengths are at risk of disappearing beneath so many generic elements.

As I mentioned, there is not a whole lot going on in terms of the story which might make many of the tasks seem superficial, if not somewhat repetitive. The city of New Providence is small when compared to some of the dizzying, colossal sandboxes from modern entries in this genre. As such, you don’t exactly pick out an objective, stock up, and take a long trip to where you carry out your tactically-planned mission. You blow up one stronghold, before literally walking to the next one where you just rinse and repeat.

I can likewise agree with naysayers that this game never fully realises its visual potential . The world is characterised by that sterile feeling of a game engine more interested in keeping the frame rate up as opposed to depicting a lush, full environment. The developers, Sumo Digital, even chose to forgo the iconic, cel-shaded aesthetics that have always defined the visual identity of this series. This all adds up to a game that just does not have the eye-candy worthy of a nine-year wait.

I thought you said you liked it?

In spite of all this, Crackdown 3 really began to grow on me once I noticed several small, yet significant ways in which the game strives to keep things slick and polished. Even if the narrative fades into the background, and the gameplay never innovates beyond what is familiar to the genre, Crackdown 3 is still really good at what it does. The action is slick, volatile and it just works for a AAA title that you expect to have Terry Crews in the lead.

Take the gun play, for example. Here Crackdown 3 prioritises the thrill of momentum and agility, so there is the option of an auto-lock on mechanic. Just bring anything into your weapon’s sights, and the designated target will automatically remain locked on while you are free to jump and dash around the battlefield like a kangaroo on opioids.

It is not just purely for style though, since movement is a crucial defensive maneuver against the ruthless, hit-scanning AI. The game eagerly throws large numbers of NPC’s at the player once the fight begins, so those slick moves serve the purpose of making you an impossibly lively target for the enemy hit. Moreover, just one strike from the later bosses is enough to hack a meaty chunk off your health bar, so getting good at dodging projectiles is anything but a wasted skill.

The guns are also really fun even if the arsenal at the player’s disposal is not exactly vast. Each weapon has been tailored for maximum efficiency towards a specific enemy type thus preventing the player from just reusing one particular loadout.

Chemical weapons are virtually useless against refinery workers in hazmat suits, but once you bring out the incendiary charges and explosive weapons, the fight suddenly shifts in your favour. This forms a welcome aspect of sub-strategy in addition to the already frenzy combat livening up your screen.

On top of all this, just because I think Sumo Digital did not fully replicate the visual potential of this series does not mean the game is ugly. On the contrary, the environment is still brilliantly colourful and vibrant, and Crackdown 3’s physics engine is certainly not shy when it comes to  showing off flashy, thunderous explosions. A distinctive cyberpunk style has also been worked into the vehicles and the architecture so, overall, the game is rather easy on the eyes.

Everything is more fun with friends… or not

Regrettably, I never got a chance to play the multiplayer, so my apologies for not being able to comment on that. This is because, firstly, the state of Microsoft’s Azure servers in South Africa will only end with me hurling my controller and, secondly, you need an Xbox Gold membership. Besides, in between Anthem and Apex Legends coming out within the same month, will anybody even be playing this?

It is perhaps important to mention that the multiplayer aspect of Crackdown 3 is called “Wrecking Zone” due to the physics-heavy gameplay mechanics. Much like Warmonger, which came out way back when PhysX cards were still a thing, the player is able to use super realistic, environmental destruction as an active advantage during gameplay. Feel like raising an entire building to the ground to flush your opponent out from hiding? Go for it. Feel like blasting a hole in the wall for a quick getaway? Sure! 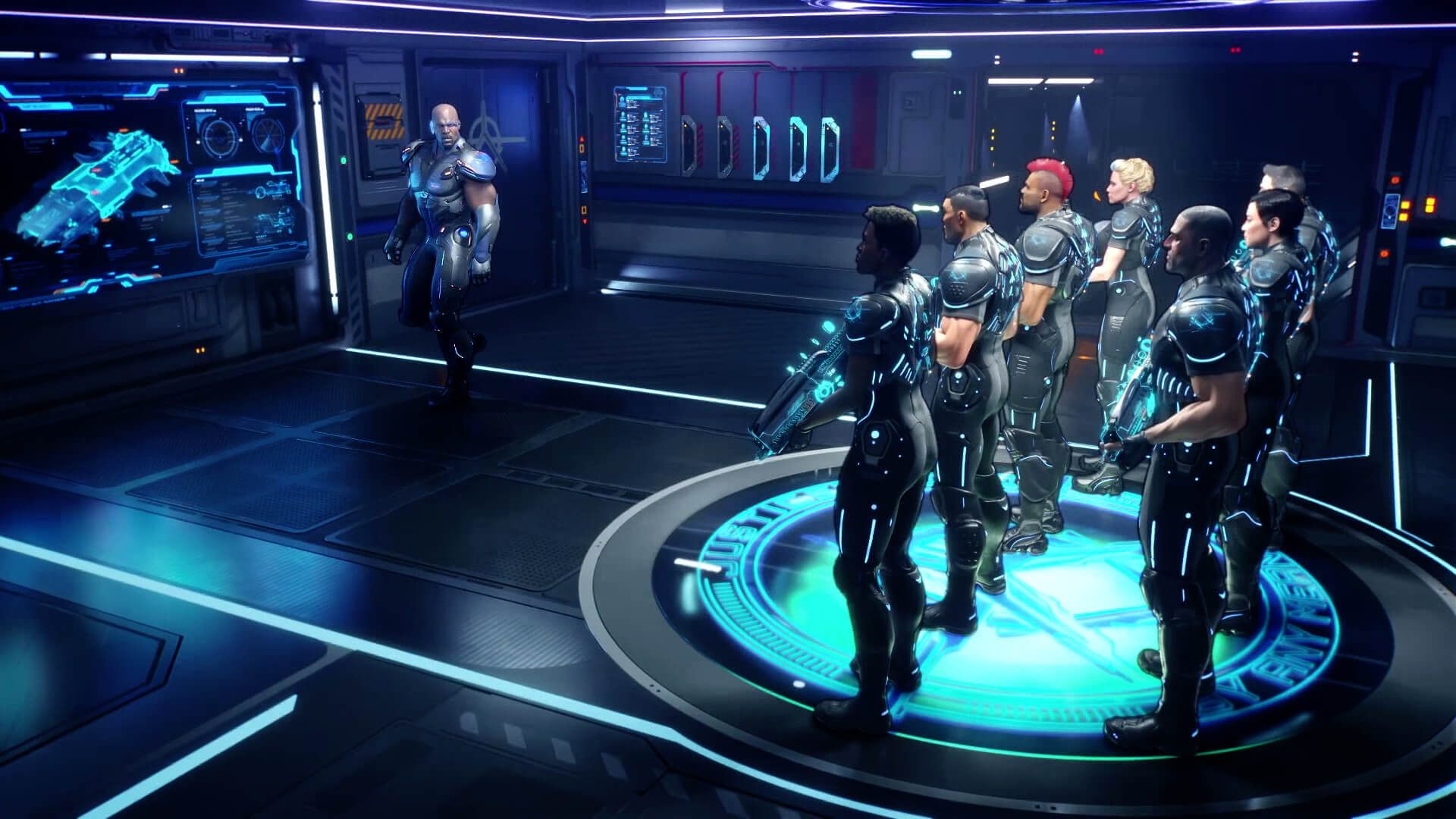 Microsoft, however, does the physics calculations for you in the cloud, so you don’t have to stress about bringing the frame rate of your PC or Xbox One to its knees. Let me know how it is if you get a chance to play the multiplayer (or if you would REALLY like a review of it).

So the dissatisfaction of Crackdown veterans is not entirely misplaced, and I had a blast playing through the relatively short campaign, but where does that leave you making your way through this review? Well, my final opinion is that Crackdown 3 cannot be called a bad game in spite of a few unmissable flaws. I am truly disappointed that they did not squeeze more of the sweet visual juices from the Unreal Engine 4, and Terry Crews was criminally underused as a leading character.

Yet, I just ended up having so much fun because, again, this game  focuses on a loyal replication of the series’ core gameplay. The action and movement are achieved via an intuitive control scheme that will have you feeling like a total juggernaut, and engaging environmental design more than make up for the lack of visual fidelity. The more skilled I became at running and gunning, the more rewarding the overall experience became even just for how much I looked like such a badass.

Crackdown 3 therefore makes for the perfect game to play over week nights when you just want to blow stuff up without having to sift through intricate narrative webs or plot twists. If you already have a Game Pass subscription, or you have a sweet tooth for the more anarchic flavour of sandbox games, play this as soon as possible. For avid fans of the first two entries and newcomers alike, perhaps waiting a bit until the price comes down would be best, but there is a good chance that you might end up liking it.