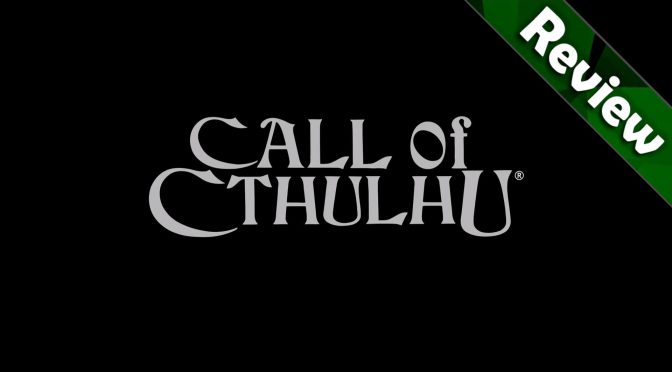 No, this is not a first person shooter starring the lord Cthulhu; trying to save the world in the name of duty. It is a very different game, a much slower game so some will love it and some will hate it. I did neither of those… I just fell asleep in my chair… twice.

It’s been almost two decades since I read the books by the world famous writer H.P. Lovecraft. Now, after 90 years, we have Call of Cthulhu the official game. To be honest I was pretty excited when I first heard the announcement. I was expecting something a bit different, something like an open-world-ish adventure game with a heavy focus on the protagonist’s mental state. Now while the devs said it will be a survival/horror rpg investigation game – and it is – in my eyes it looks like a glorified walking simulator. While this is just my opinion I do not necessarily say the game is bad. It isn’t great but I had fun playing it, even if some parts did put me to sleep.

Call of Cthulhu tells the story of Edward Pierce; an alcoholic WWI veteran working as a private investigator who is called to investigate (obviously) the death of a wealthy family at the remote island Darkwater near Boston.

The game is not very pretty, and some assets – like the 3D models – look awful. At least it runs fine with everything maxed. There were some places that dropped the frames below sixty but thankfully that was a rare occurrence. If you want a more detailed read regarding the game’s performance go ahead and check our analysis.

I really have almost nothing to say about the music or sound effects. Nothing really stuck in mind and the soundtrack was absolutely forgettable. Sounds are basic at best, and the sound of walking in high heels must be the most unrealistic one yet I’ve heard in a video game.

The voice acting is a mixed bag. While the main characters are mostly OK, the rest are not and for some reason I find Pierce’s voice a bit boring and emotionless. Even when there is slight bits of emotion in one voiced line, the transition to the next line can be in a completely different emotion state. He can scream his lungs out one second and the next second sounds as cool and relaxed as possible (like having drinks at the beach). I did not like the voice acting in Vampyr and I don’t like it here, though this is a personal preference and if any of you enjoyed Vampyr you have nothing to be concerned about; the protagonist sounds absolutely the same.

Now while the world is dark and creepy, just as it should be, it is not scary. I usually do not play horror games and this is not a horror game. Dark Corners of the Earth scared me a whole lot more than this. Call of Cthulhu does have a few sequences which produce a bit of anxiety but never fear. And how it can create fear when the game uses checkpoints? Though I do have to say that I really appreciated them.

Speaking of checkpoints and difficulty, one part where you do the classic hide & seek from something sinister and extremely angry “thing” that wants to wear your face for Halloween was fun, hard and stupid at the same time. That is because you have a limited time and knowledge to choose the right tool for the job from many other tools that look alike, so every time you choose wrong you will probably have to replay the sequence which, once again, destroys the flow and immersion of the game. Thankfully these kind of sequences are few. But hey, at least the game does feature skippable cutscenes.

The investigation gameplay is basic. You find clues by collecting items and speaking with specific NPCs. In some scenes you can initiate an “ability” which lets you, in a way, to reconstruct the past scene. Honestly, this mechanic is completely silly and out of place since the game never explains why you are able to see what you see the way you see it. It reminds me the female detective from the Netflix TV series “Luke Cage”. Yeah sure it looks cool and cinematic but it makes no sense.

There is also a skill-tree with several skills to choose from and each one of them increases specific attributes. To be honest though, I did not fully understand how you gain the ability points. I think it is predefined how many points you get and when you get them, but I might be mistaken. The most important skill, I believe, is the one which unlocks extra dialogue options but unfortunately the dialogues do not blend naturally in the conversation and feel weird. Actually, many dialogue options do not feel natural and do not match the flow of the conversation.

You might know the devs from previous titles like Styx, Space Hulk or the recently announced Werewolf, which I really hope to be better than this or their previous released games. The whole game is around eight to ten hours depending on how much investigation you are willing to do and costs forty-five dollars.

This isn’t a bad game, though it feels a bit rushed. There are good things in it but the presentation is lacking and if there was a better balance between the investigation and action parts, the game could have been better by keeping you on your toes during the whole playthrough… or at least a bit more interested along the way. My recommendation is to wait for a price drop, even if you are a fan of the books and the Cthulhu mythos in general. After all, Christmas sales are coming really soon.