Call of Cthulhu is the official video game adaptation of Chaosium’s pen & paper RPG. Developed by Cyanide Studios and powered by Unreal Engine 4, this latest investigation game is now available on the PC so it’s time to benchmark it and see how it performs on the PC platform. 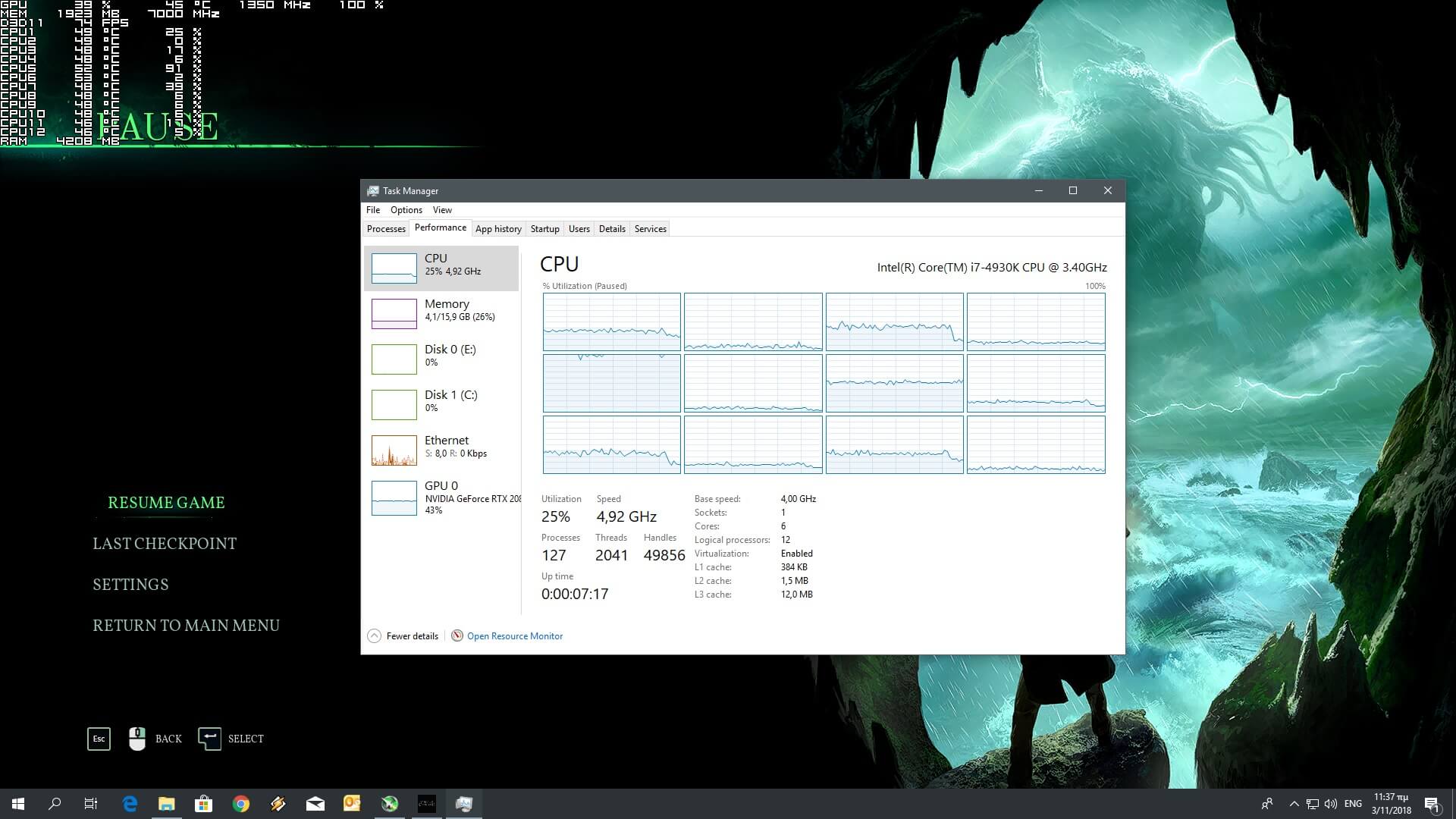 Cyanide has included a few graphics settings. PC gamers can adjust the quality of view distance, anti-aliasing, post-processing, shadows, textures and effects, and there is also a resolution scaling option. 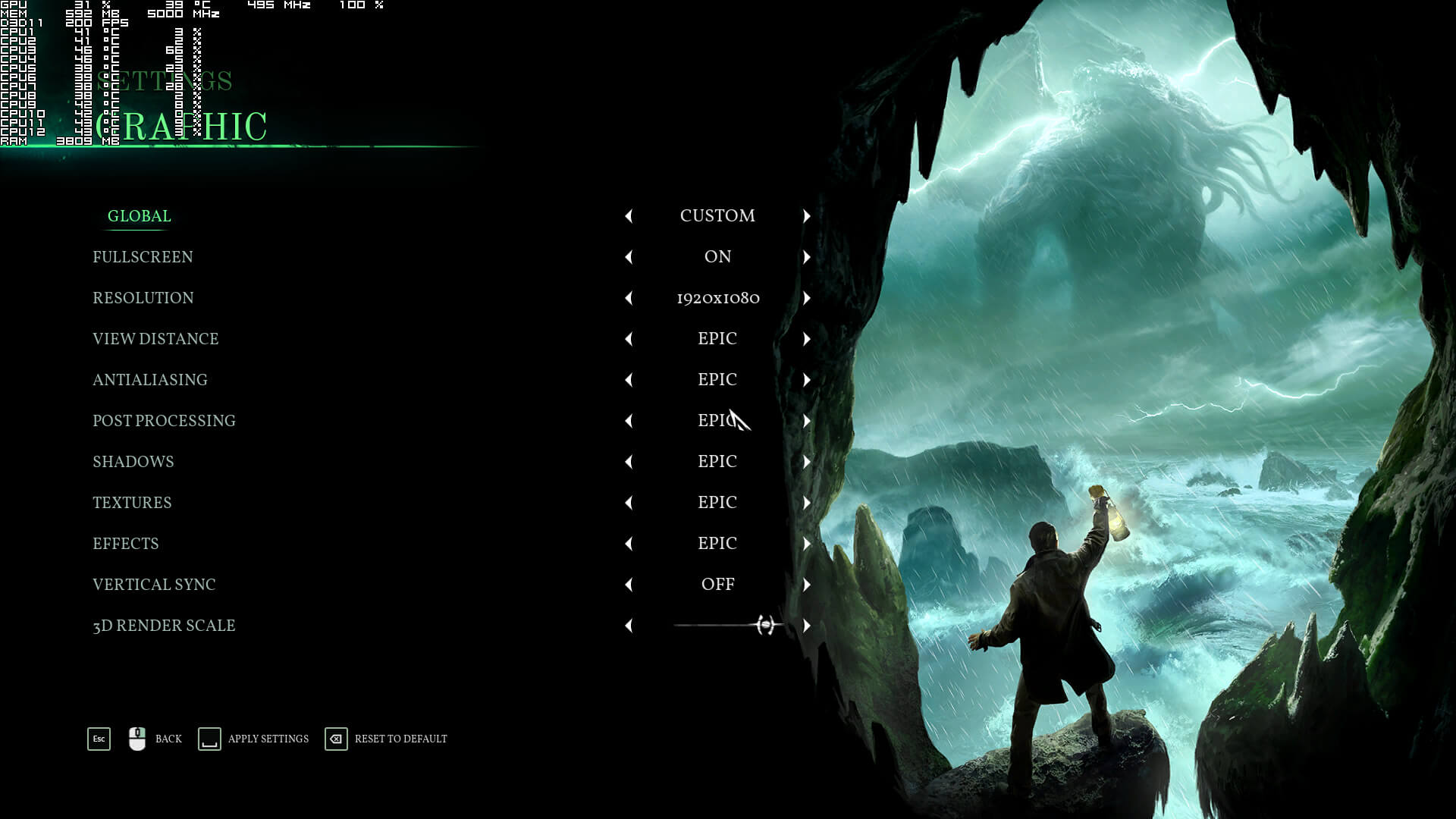 While Call of Cthulhu is powered by Unreal Engine 4, an engine that should scale wonderfully on multiple CPU threads, it appears to be mainly using one. Not only that, but there are certain scenes in which this main thread gets maxed out and as a result of that, the game can get CPU-bound. A perfect example is the following scene we used for our CPU benchmarks (pay attention to one of our CPU threads that is almost maxed out). 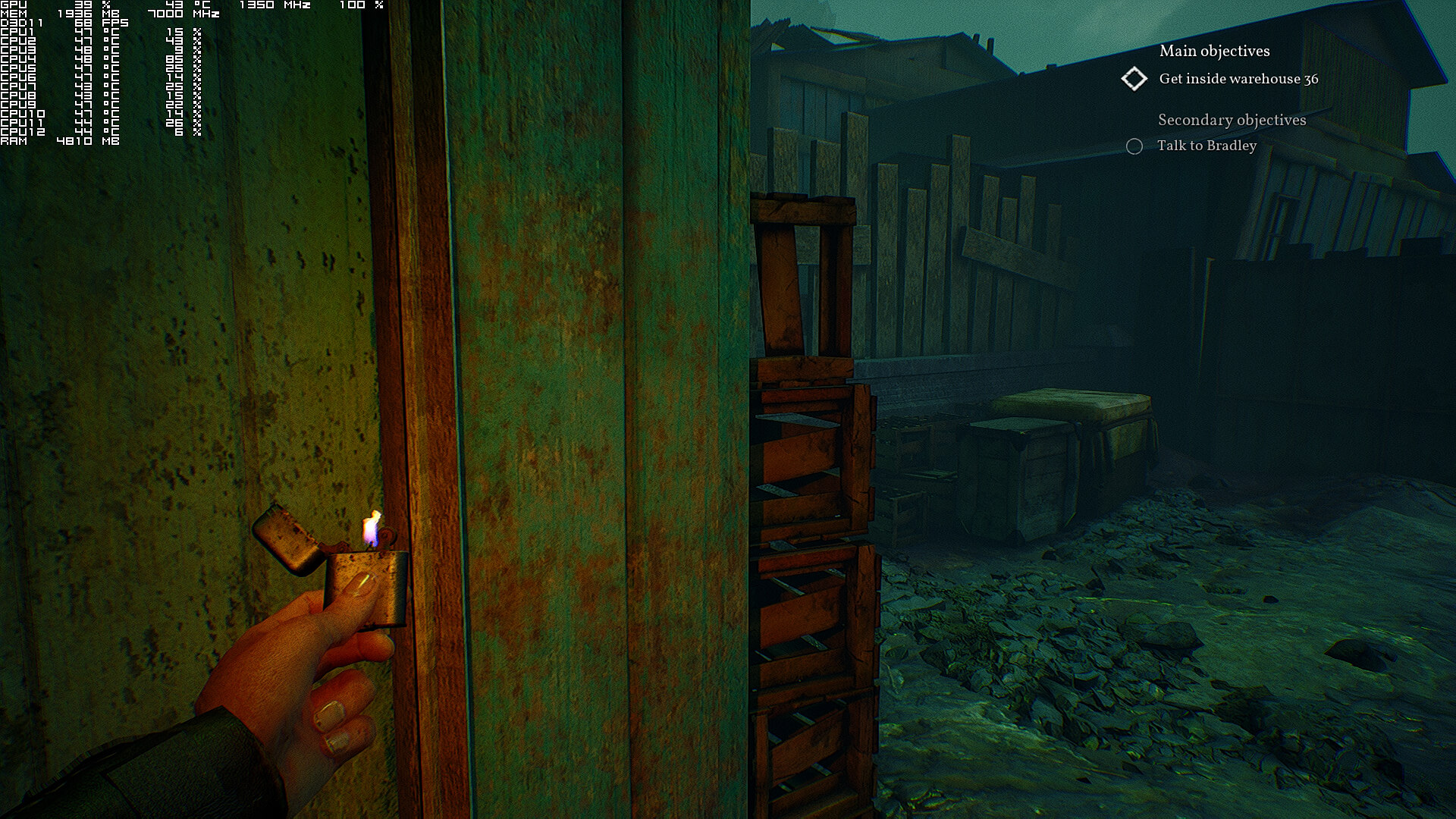 In order to find out how the game performs on a variety of CPUs, we simulated a dual-core and a quad-core CPU. Now while our simulated dual-core system saw some performance improvements when we enabled Hyper Threading, we did not notice any major differences on our six-core and our simulated quad-core systems. It’s obvious that the game could run better provided there was proper support for CPU multi-threading, however we don’t expect Cyanide to release any performance patch (like Turn10 and Playground Games did for Forza Horizon 3). 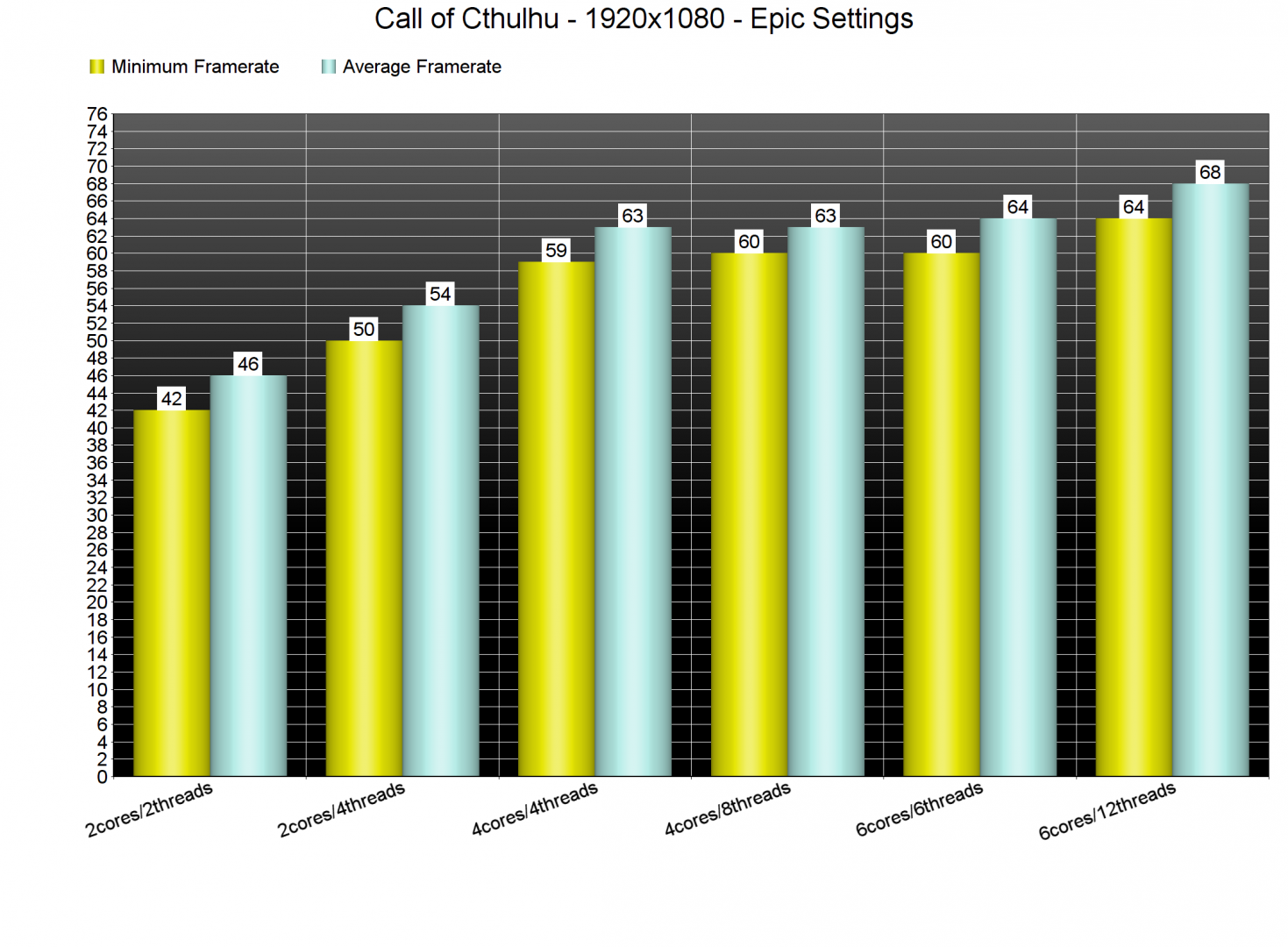 For our GPU benchmarks, we used the Hawkins’ mansion area level which appeared to be GPU-bound. 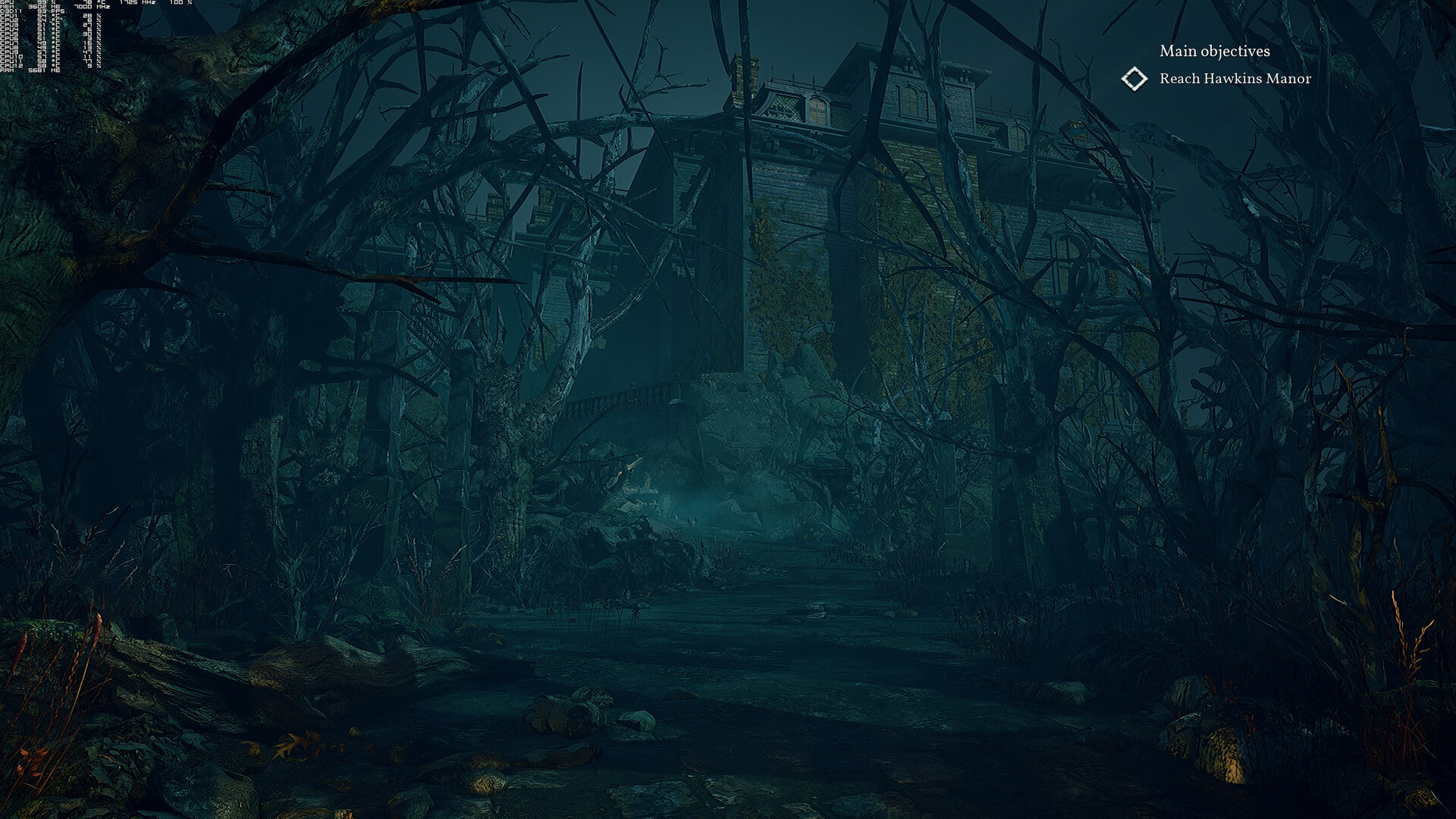 Thankfully, most of our graphics cards were able to run the game without any performance issues. Our AMD Radeon RX580 was able to offer a smooth gaming experience at 1080p on Epic settings, whereas our GTX980Ti was able to provide a silky smooth experience at both 1080p and 1440p. 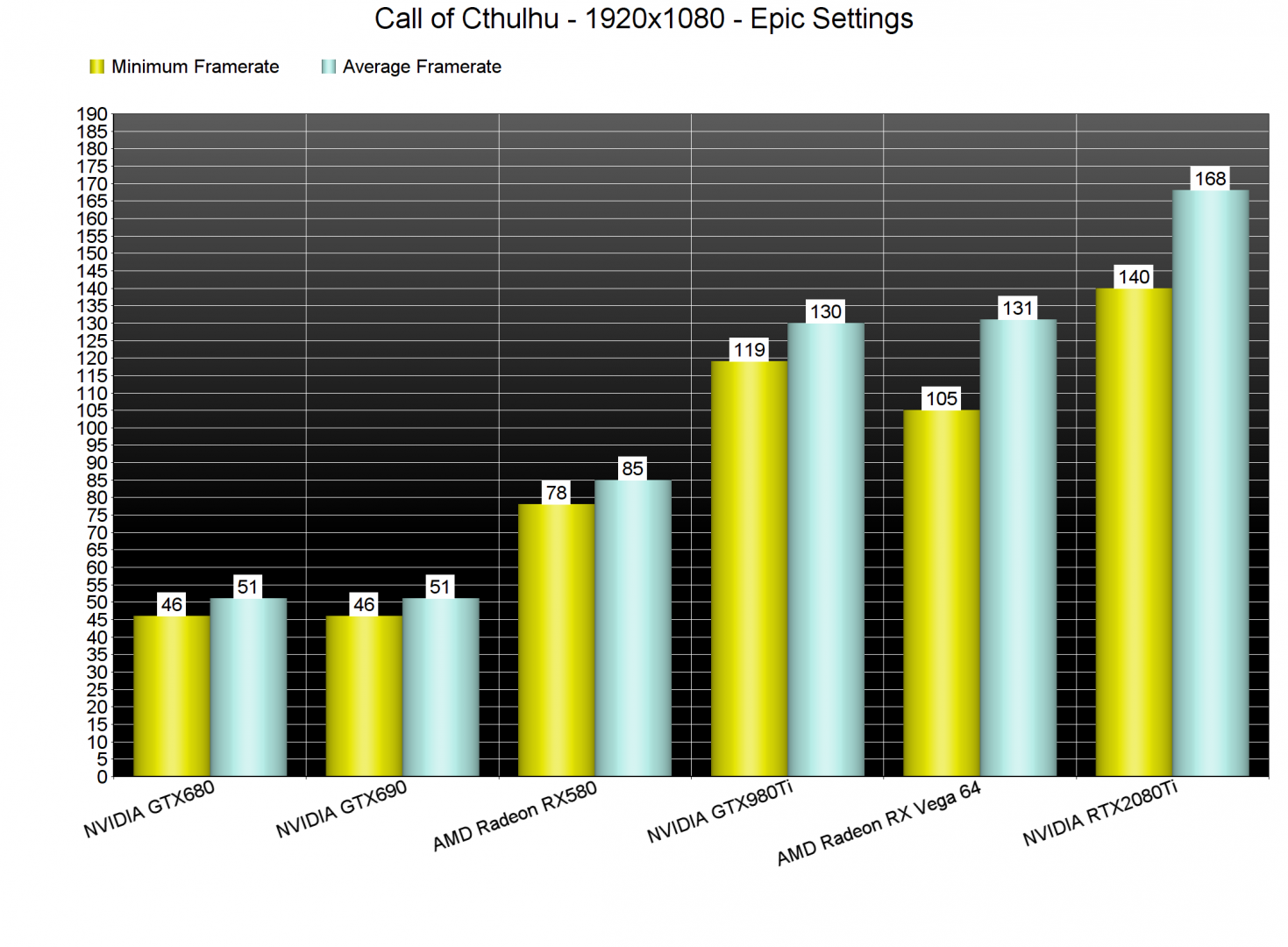 Call of Cthulhu is one of those games that favours NVIDIA’s GPUs. As we can see below, the performance on our AMD Radeon RX Vega 64 was underwhelming. Even in 4K, AMD’s flagship was a few frames faster than the GTX980Ti. On the other hand, our EVGA RTX2080Ti XC Gaming was able to offer a constant 60fps in 4K on Epic settings. 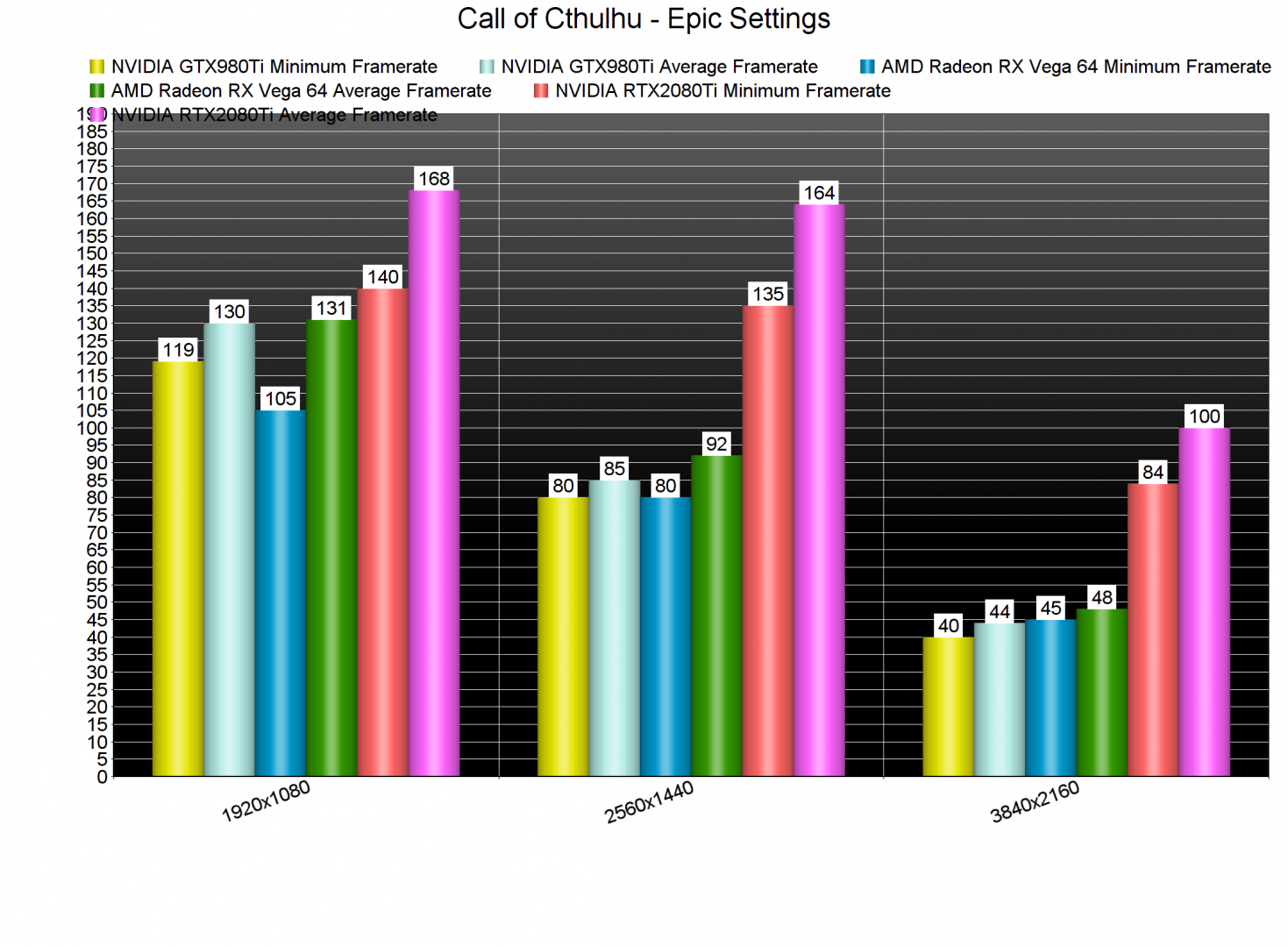 As we’ve already said in our 4K screenshots article, we were not really impressed by the game’s visuals. They look fine but to be honest I was expecting better things from it. Most characters look awful (especially when you think what Unreal Engine 4 can actually achieve). The lighting feels flat, not all light sources cast shadows, there are numerous low-resolution textures and the game only uses the DX11 API.

All in all, Call of Cthulhu can run with 60fps on various PC configurations, however there is room for improvement. The game mainly uses one CPU thread and as a result of that, some PC gamers may encounter performance issues in specific scenes. The game also under-performs on AMD’s graphics cards, something we’ve seen and in other Unreal Engine 4 games that are using the DX11 API (this is an issue with AMD though and not with the game itself). Thankfully Call of Cthulhu does not require a high-end GPU for 1080p/60fps on max settings but then again, it’s not a particularly impressive – visually – game!