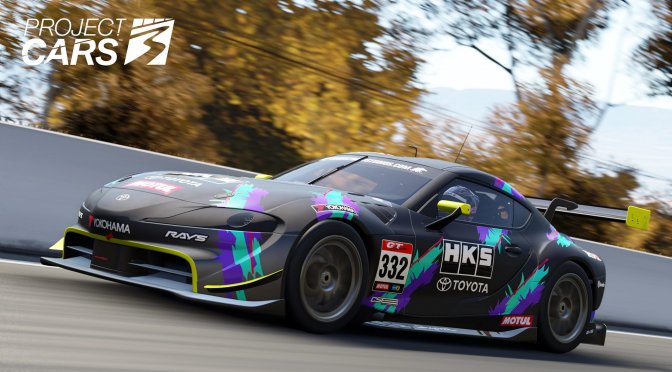 Project CARS 2 was one of our most optimized PC games of 2017. As such, we were really looking forward to its sequel, Project CARS 3. Powered by the Madness Engine, Project CARS 3 is now available so it’s time to benchmark it and see how it performs on the PC platform.

Slightly Mad Studios has added a wide range of PC graphics. PC gamers can tweak the quality of Textures, Reflections, Environment Map, Cars, Tracks and Shadows. There are also options for Mirror, Motion Blur, Head Shake, Grass, and Particles. Surprisingly enough, and contrary to Project CARS 2, the game does not support any AA post-process solution, like FXAA or SMAA. Instead, the game supports Super-Sampling (Low and Medium) which, obviously, brings a noticeable performance hit.

Project CARS 3 does not feature any built-in benchmark tool. As such, we’ve decided to create a worst-case scenario test. For our benchmark, we used 16 cars and raced in Shanghai at night and during a Thunderstorm. This is one of the worst-case scenarios you will find in this game.

In order to find out how the game scales on multiple CPU threads, we simulated a dual-core, a quad-core and a hexa-core CPU. And, even though the game only uses DirectX 11, it can run smoothly even on a dual-core system. Our simulated dual-core was able to push a minimum of 58fps and an average of 64fps with Hyper Threading enabled. Without Hyper Threading, we had major stuttering issues and the game was unplayable. It’s also worth noting that Project CARS 3 is one of the few games that does not benefit from Hyper Threading on mid-tier and high-end CPUs. As you may have noticed, the game mainly uses once CPU thread. Thus, we assumed that our framerates would be higher when Hyper Threading was disabled and we were partially right. While our average framerates were not increased, our minimum framerates saw a noticeable boost on most of our systems. 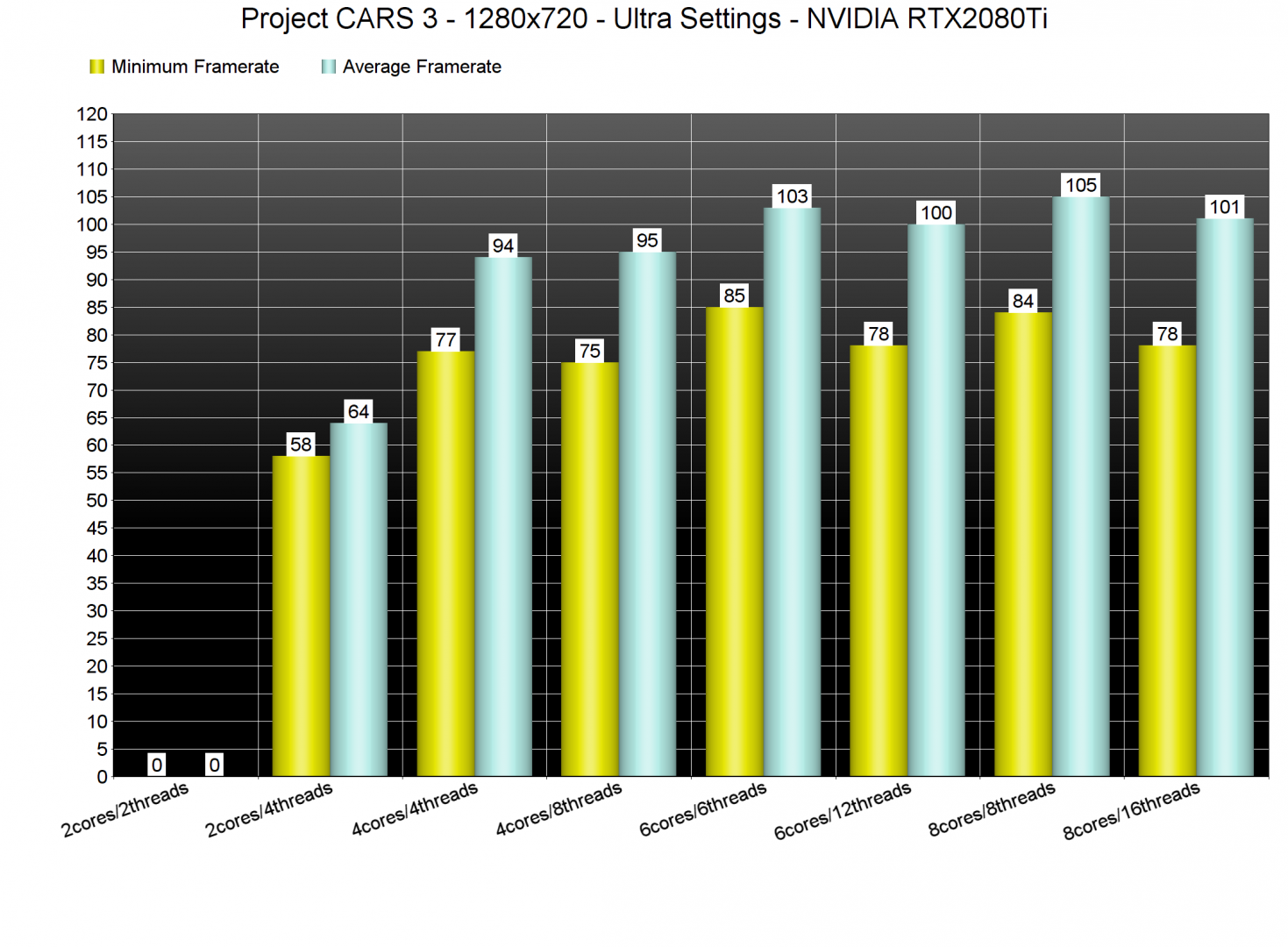 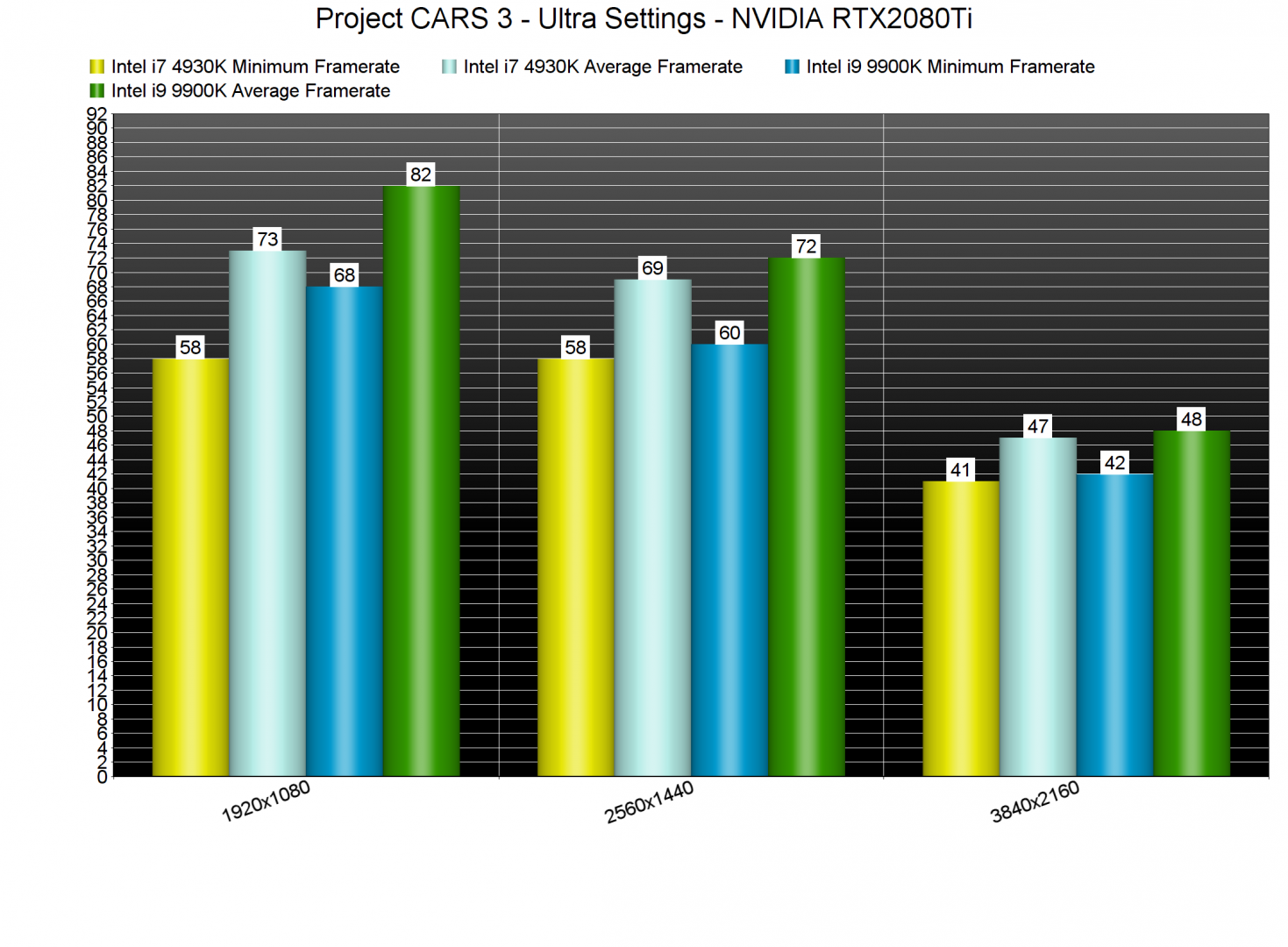 Given its somehow light CPU requirements, we can easily classify Project CARS 3 as a GPU-bound game. At both 1080p and 1440p, the only GPU that was able to run the game smoothly was the RTX2080Ti. Again, keep in mind that this is a worst-case scenario. However, the campaign does actually feature such demanding races (the last race of the first tournament is a perfect example). So yeah, while the game will run smoothly in some races, you’ll undoubtedly encounter some that will perform horribly. 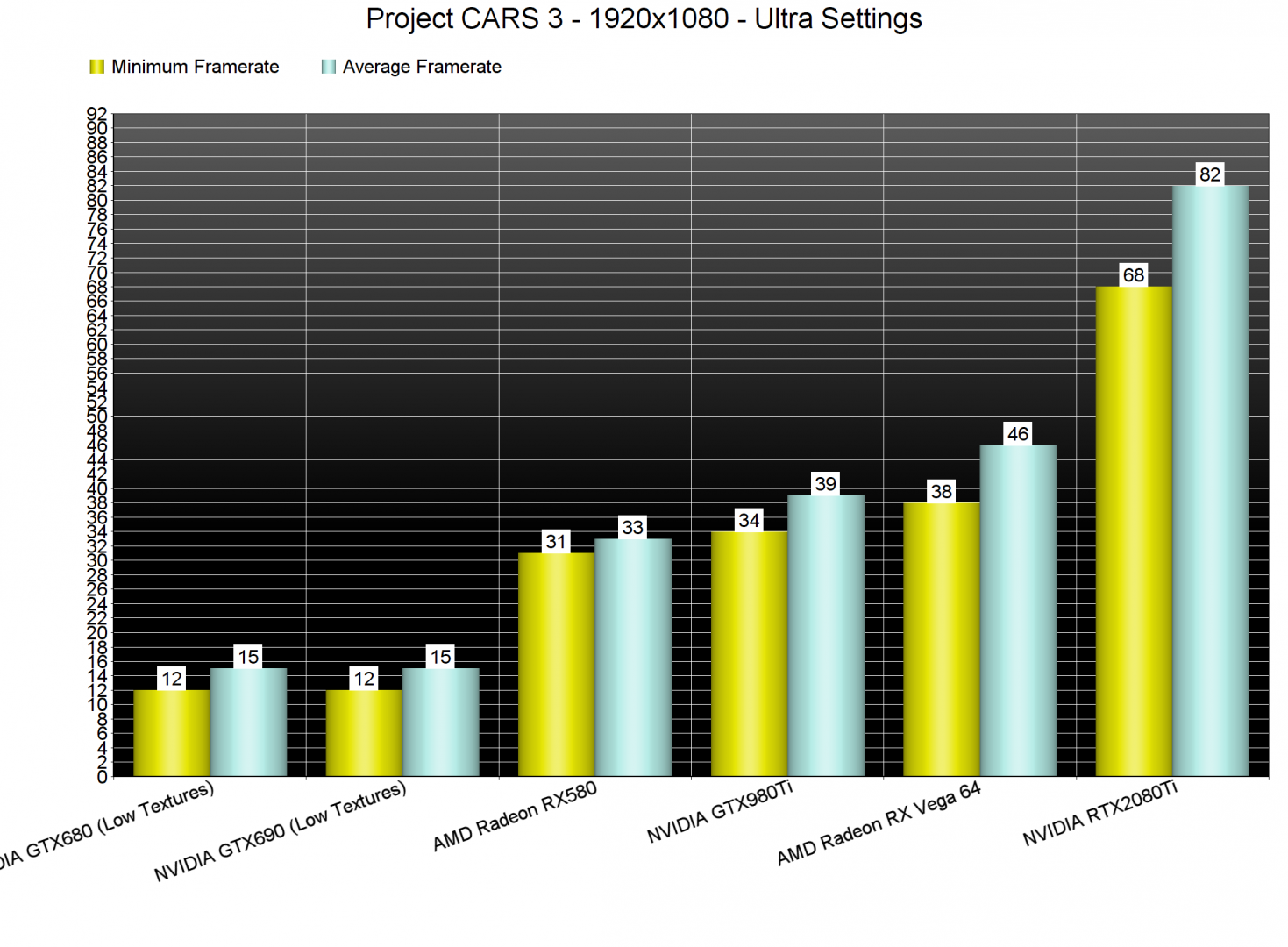 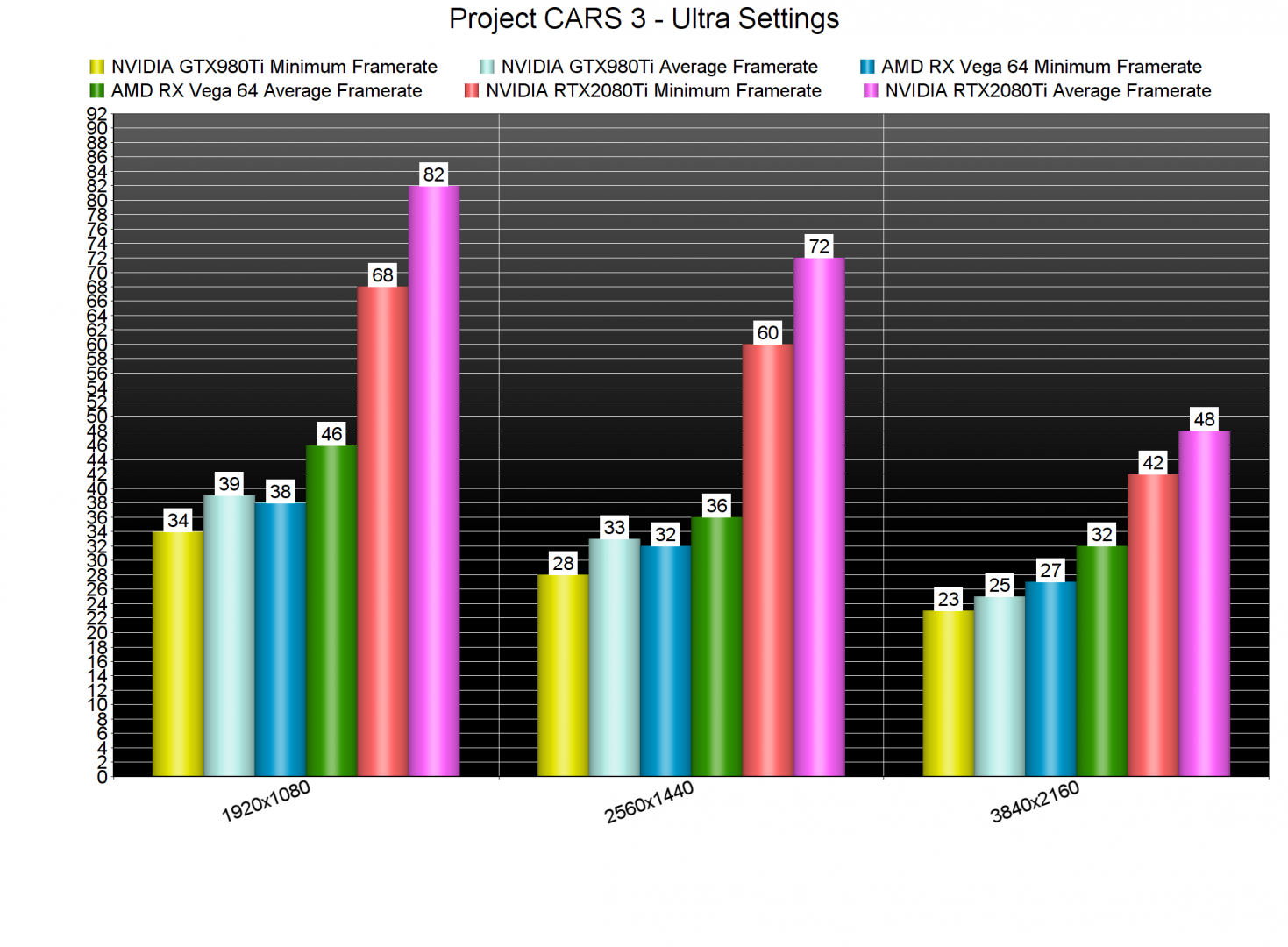 Ironically, Project CARS 3 looks in numerous cases worse than Project CARS 2. The game suffers from some truly AWFUL pop-ins, even on Ultra settings. Shadows cascade is also really low, resulting in shadows that form/disappear right in front of you. Take for example the following screenshots (in which I circled some background shadows). These shadows were disappearing while I was driving. We’re talking about shadows that are completely changing, right in front of you (and not in areas that are miles away). Your cars will also suffer from major pop-ins, even on replays. Hell, even the rain when using an exterior camera suddenly disappears when it’s about to hit the ground (despite the fact that there are separate raindrop effects on puddles). 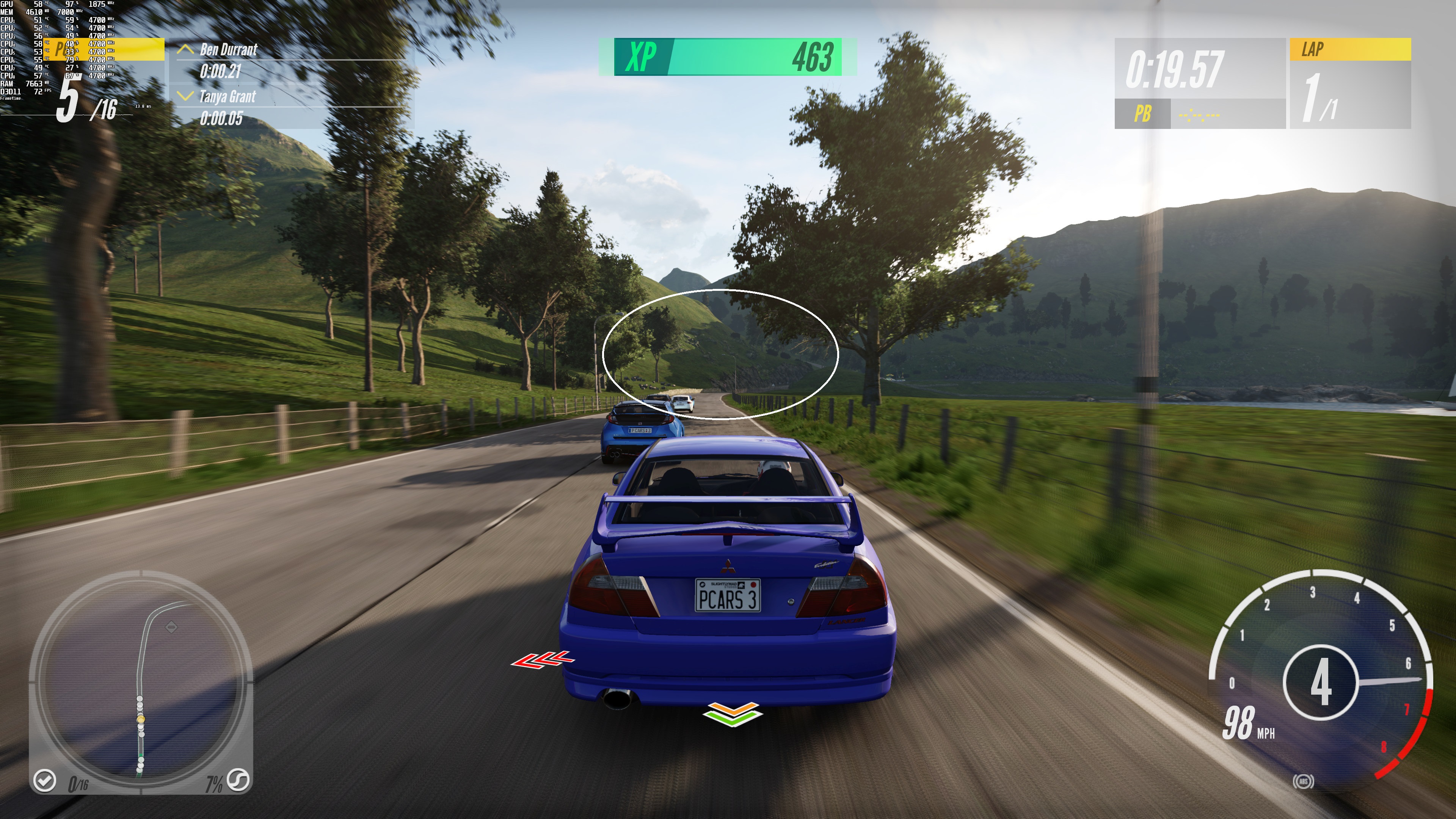 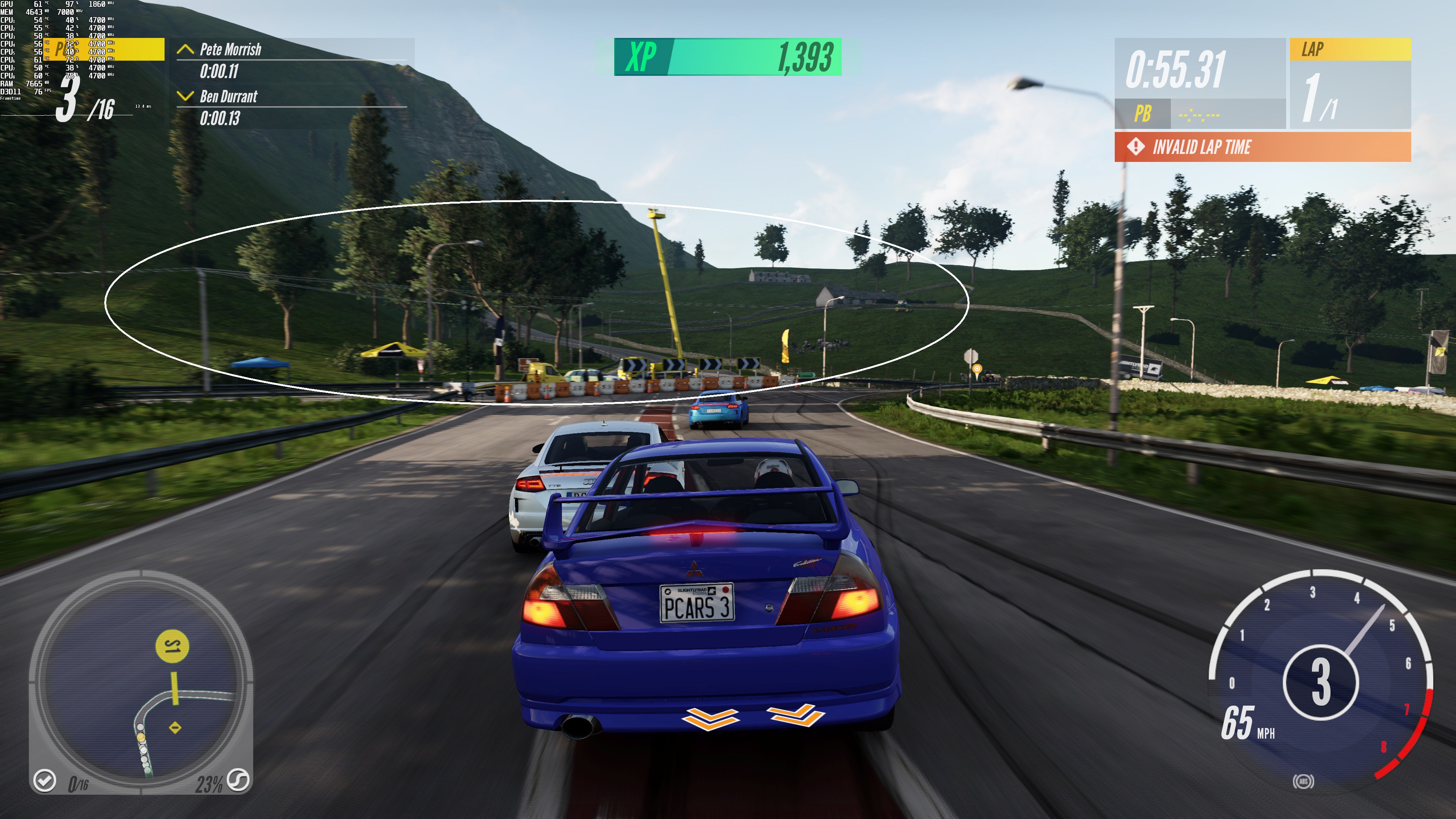 Not only that, but there are some awful low-resolution textures. Take a look at the rear lights of the main car in this screenshot. And now compare them to Project CARS 2 (it’s a different car, but it perfectly showcases the “clarity” discrepancy between these two games). Or take a look at the complete lack of any shading effects in some screenshots. Or how underwhelming, bland and flat everything looks at night. The cars at night look like plastic and not like actual cars. I don’t know what the hell is going on here. However, the game’s graphics are underwhelming, and nowhere close to what we’d expect from the successor of Project CARS 2. It’s also funny that Project CARS 2, a game that came out in 2017, looks better in numerous cases than its direct sequel.