After almost a month, our EVGA GeForce RTX 2080Ti XC has finally arrived. As such, we’ve decided to test the ten most demanding PC games that are currently available and see how this new GPU performs. Now I’m pretty sure that most of you have heard that this GPU targets a 4K/60fps experience, however the following results will undoubtedly surprise you.

For these benchmarks we used an Intel i7 4930K (overclocked at 4.2Ghz) with 16GB of DDR3-2400, Windows 10 64-bit and the latest version of the GeForce drivers (416.34). The games we’ve tested are: Crysis 3, Final Fantasy XV, Project CARS 2, Quantum Break, Assassin’s Creed Odyssey, Assassin’s Creed Unity, Ghost Recon Wildlands, Monster Hunter World, Kingdom Come Deliverance and Shadow of the Tomb Raider. For all these games we used their Ultra presets, we’ve lowered anti-aliasing to reasonable options and removed all NVIDIA Gameworks effects from games that supported them. We’ve also tested the games at 1440p, 1871p (that’s DSR 3X as we had trouble setting a custom 3200×1800 resolution. Also, DSR 3X could not work at all in Monster Hunter World) and 2160p.

Do note that the following are stress tests, showing the worst case scenario, especially for games that do not have a built-in benchmark tool. For Assassin’s Creed Unity, for example, we benchmarked an open-world area with a huge crowd. In Crysis 3 we tested the first level which is actually more demanding (GPU-wise). In Project CARS 2 we’ve used our usual stress test in which we had 25 vehicles racing in the night during a Thunderstorm). In Kingdom Come Deliverance we used the area when Henry is about to do “something spoiler-ish.” At the end of the article we’ve included some screenshots showcasing the environments/scenes we’ve tested.

Let’s start by sharing our 1440p benchmarks. As you can see in the following graph, some games came really close to dropping at 60fps. So no; the RTX2080Ti is not only for those gaming with 120Hz or 144Hz at that particular resolution, especially for those that want a constant 60fps experience on Max settings. In Monster Hunter World we used the Hub area which puts a lot of stress to the GPU (it’s even more demanding than the forest area). 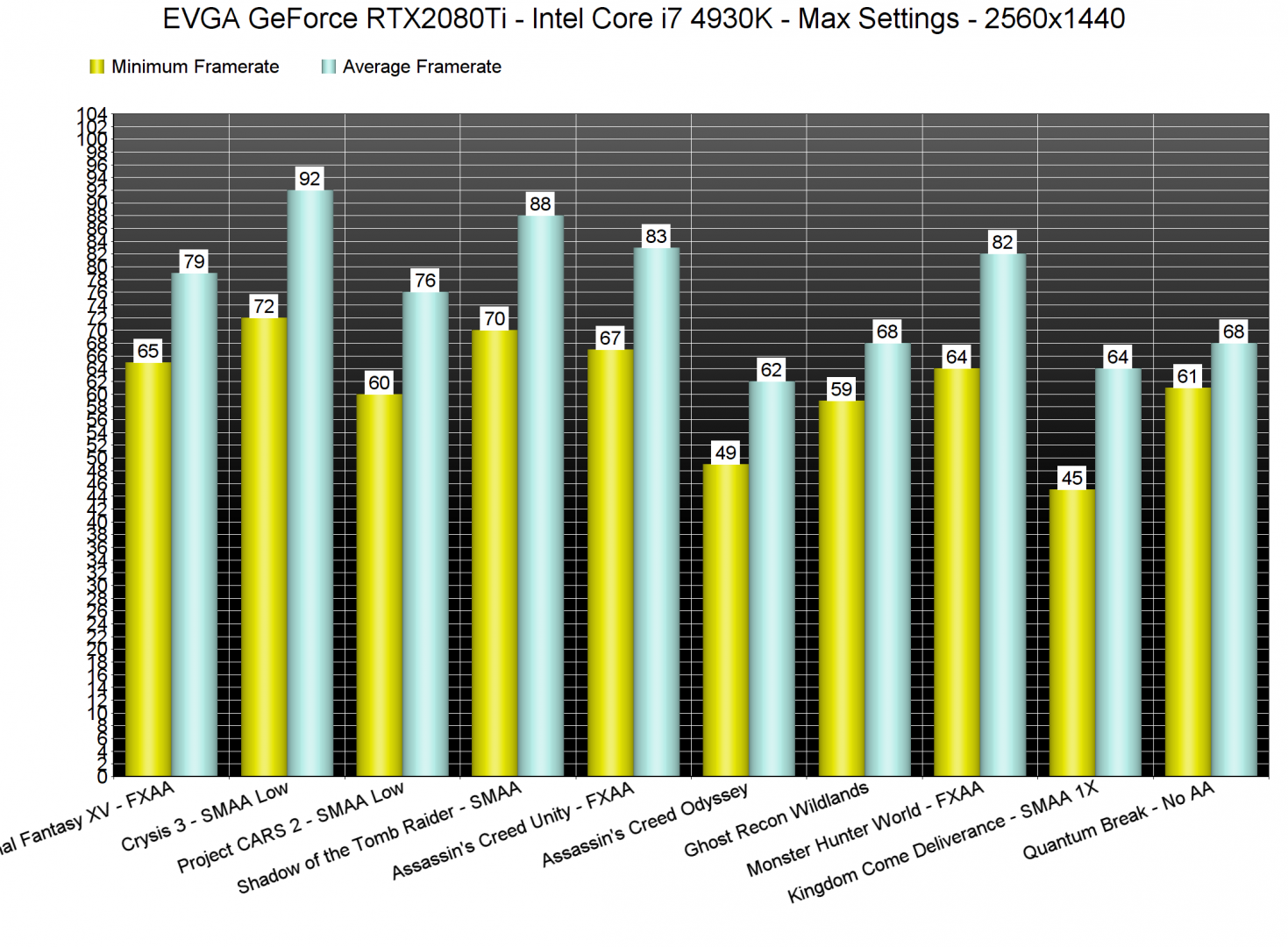 Now I know some might say that we are bottlenecked by our CPU. However, that’s not the case here (well apart from Final Fantasy XV and Assassin’s Creed Odyssey). In every other game, our RTX 2080Ti was used to its fullest, even at 1440p. We told you that these results would surprise you but then again, we also said that these are the most demanding PC games to date. Below you can find some 1440p screenshots from Crysis 3, Monster Hunter World, Ghost Recon Wildlands and Kingdom Come Deliverance. As you will immediately notice by our GPU usage, we are not limited by our CPU at all.

Oh, and in case you forgot how GPU demanding Quantum Break is, here is a… 1080p screenshot. Yeap, 95% GPU usage in that game at 1080p, though this should not really surprise us as there were very few PC configurations that could run Quantum Break without its reconstruction tech when it was initially released. And man… it still looks gorgeous thanks mainly to its advanced lighting system. 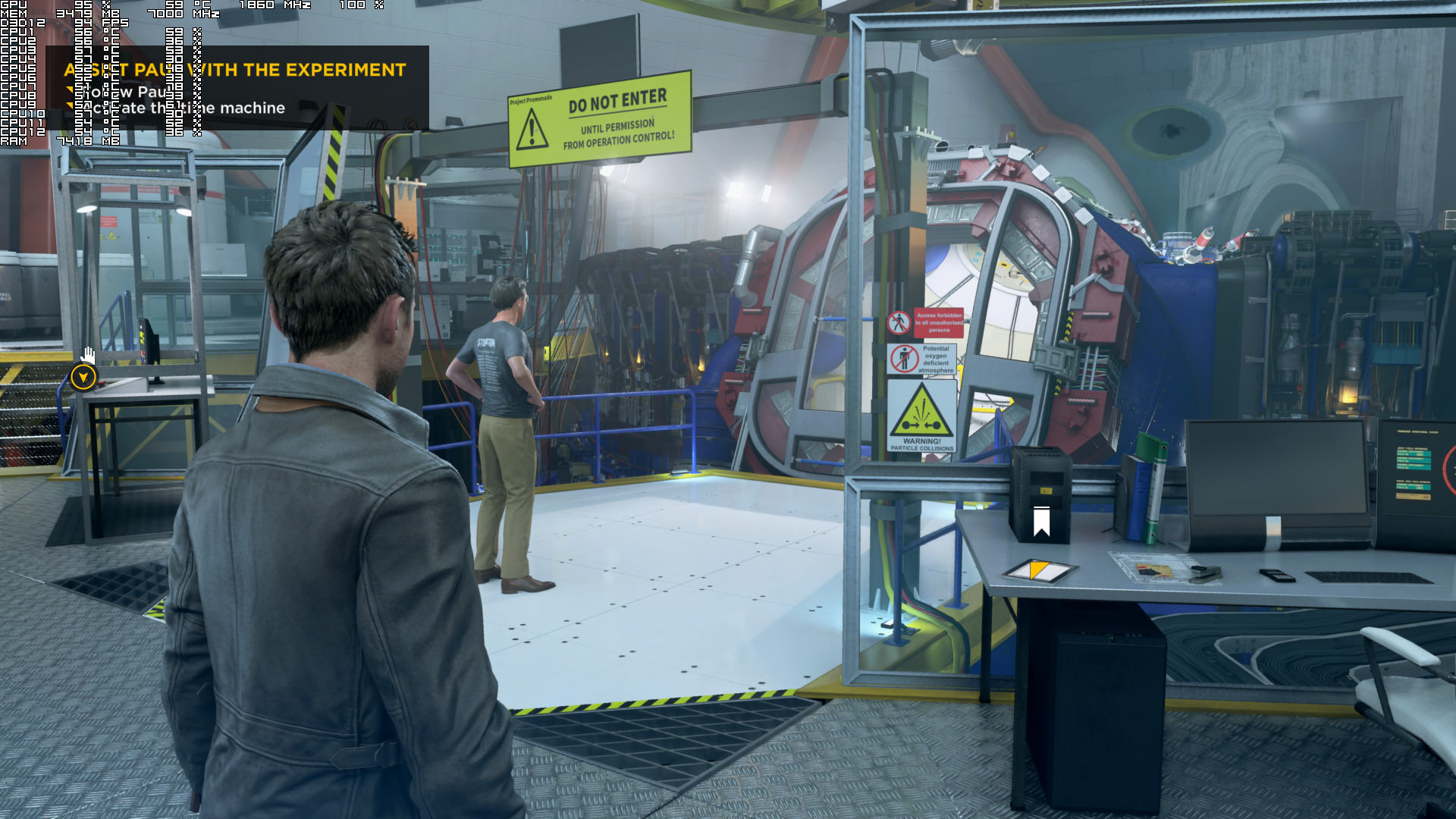 Surprisingly enough, Final Fantasy XV came really close to a 60fps experience in 4K (and we’ve tested one of its biggest cities so the game can run even better in other scenes). To be honest, I was expecting far less results but our RTX2080Ti was able to run the game on Ultra settings (without Gameworks) with a minimum of 53fps and an average of 62fps. Crysis 3 and Project CARS 2 also came close to a 4K/60fps experience.

However, things went downhill from there. Most of the other games averaged around 46-52fps with drops to low 40s. As such, the overall experience in them wasn’t ideal and those seeking smooth framerates will either have to use a Gsync monitor, lower their settings or lower their resolution.

From the aforementioned ten games, Quantum Break and Kingdom Come Deliverance were the most demanding ones. In both of these games our framerate dropped below 30fps in 4K on Very High settings. It’s pretty obvious that these two titles cannot run smoothly in 4K even on the most powerful GPU that is currently available on the market. 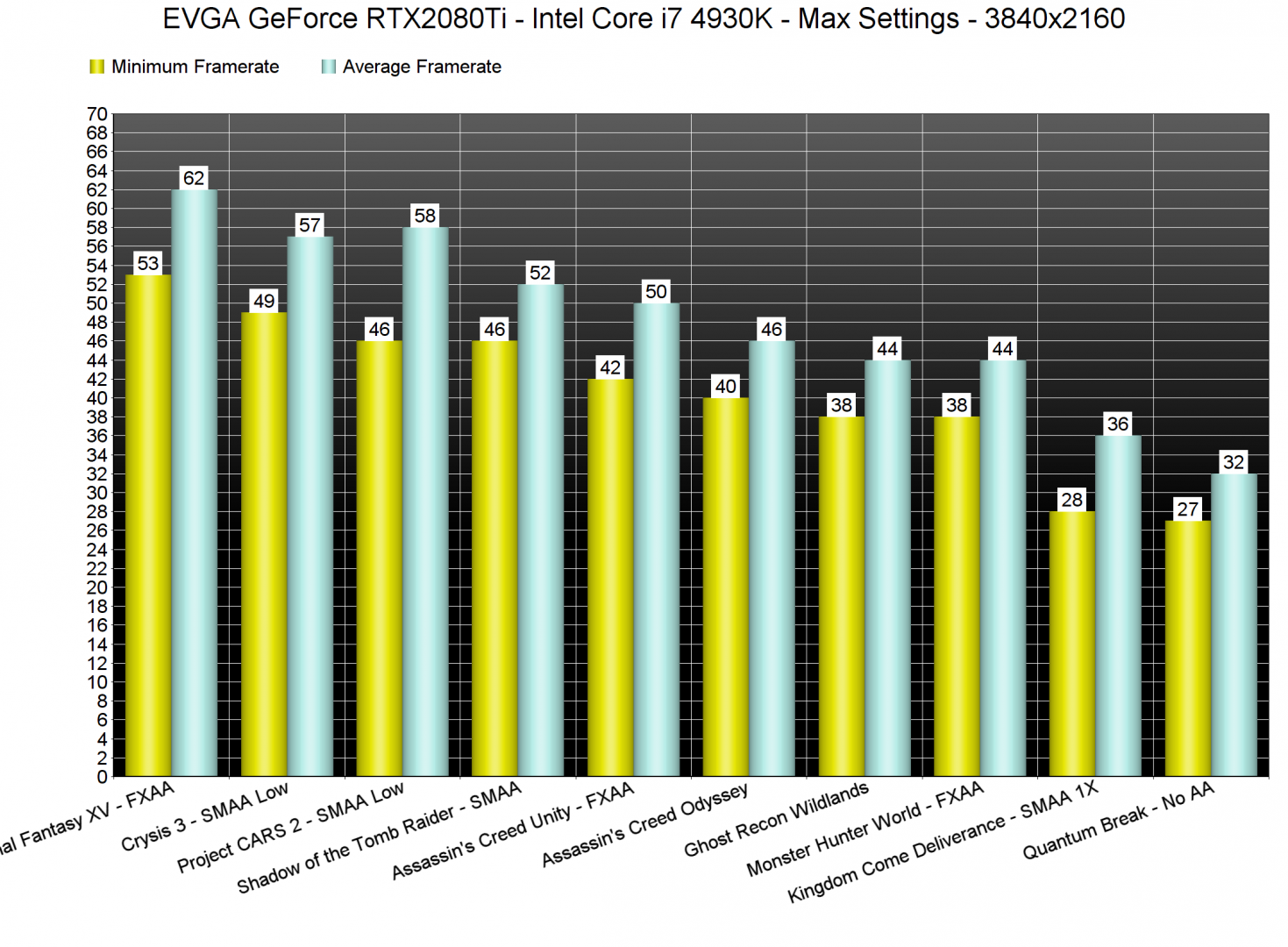 All in all, it’s pretty obvious from these tests that the NVIDIA GeForce RTX2080Ti is not an overkill for those gaming at 1440p. In fact, I’d say it’s the perfect GPU for that resolution and no; we are not talking about gaming exclusively at 144hz. In all fairness, and while RTX2080Ti cannot offer 4K/60fps for the most demanding PC games, it can come close to it at 3325×1871, Not only that, but I’m pretty sure that DLSS will give a significant boost for those targeting 4K resolutions. Seriously, DLSS may be more important to some gamers than the upcoming real-time ray tracing effects. However, there aren’t any games right now that use this technique which is a real shame. 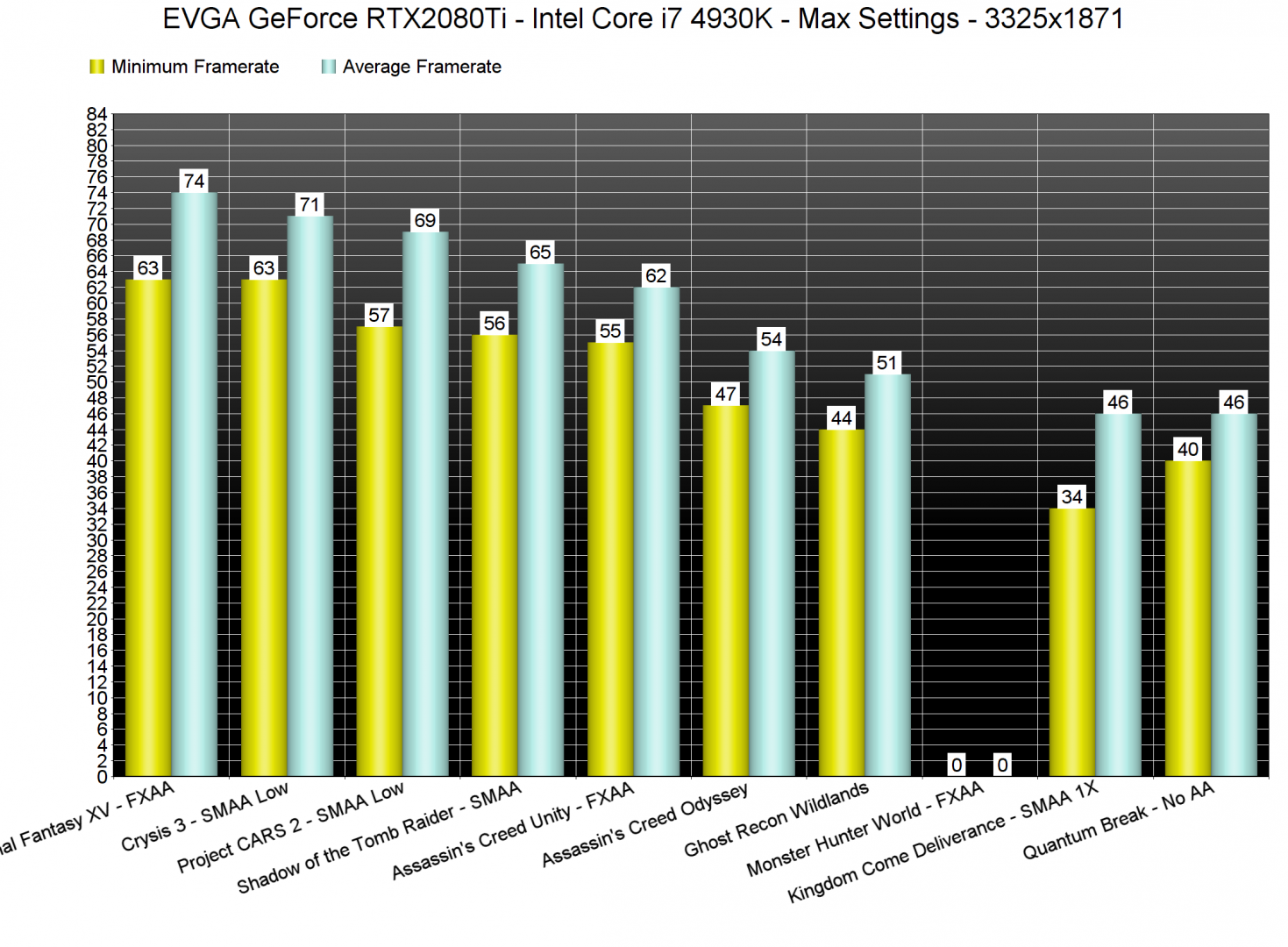 So yeah, in conclusion the RTX2080Ti is a beast however it certainly does not justify its ridiculously high price… at least in our opinion. It also cannot run the most demanding games at 4K/60fps on the Highest settings though to be honest, some games – like Monster Hunter World – are seriously unoptimized. Some settings are also ridiculously demanding – like Assassin’s Creed Odyssey’s Volumetric Clouds – so we strongly suggest tweaking some settings in order to improve overall performance!