Earlier this month, Bethesda released inXile’s latest third-person co-op fantasy action RPG, Hunted: The Demon’s Forge. The game is set in a dark fantasy world where players take control of either E’lara, a ranged weapon expert, or Caddoc, a master swordsman. Hunted is powered by Epic’s Unreal Engine 3 so it’s time now to see how it performs with a modern-day PC.

As stated above, Hunted: The Demon’s Forge is developed on Unreal Engine 3 and like most Unreal 3 games it has that annoying brown-ish feel to it. This is an issue that we’ve witnessed in each and every Unreal 3 Engine game. On top of that, the lighting system is not as polished as we’d hoped to as there are a lot of static light sources that don’t cast shadows. But damn, this brown color grading is really awful and should be banned from using it. It doesn’t look good, it doesn’t look realistic and it doesn’t look cinematic. The skyboxes are as simple as they can get and there are some clipping issues with various environmental objects. The polygon count on most characters is pretty low for today’s standards. You will immediately notice the triangle-ish boobs of the female protagonist or the square-ish bald of Caddoc.

Hunted: The Demon’s Forge doesn’t support Ambient Occlusion, thus the environments look a bit bland, despite the company’s attempt to avoid it by adding a global shadow to the main characters. Moreover, interactivity is limited and the game’s environments are linear, and full of ‘invisible’ walls. And it’s sad that Hunted is plagued by those compromises. It shows the game’s console origins and it’s sad that those console limitations have been passed onto the PC version as the game features among the best textures and diffuse/normal maps we have ever seen, its art design is exceptional and its raindrops shading effects are also spectacular. The game also supports Nvidia’s PhysX, though we have to say that we’d expected to see a better use of them. Instead, what we get is some generic scripted destruction events that most modern-day games feature. Last but not least, Nvidia’s GPUs can’t be used for all those physics calculations as there isn’t any hardware PhysX support. 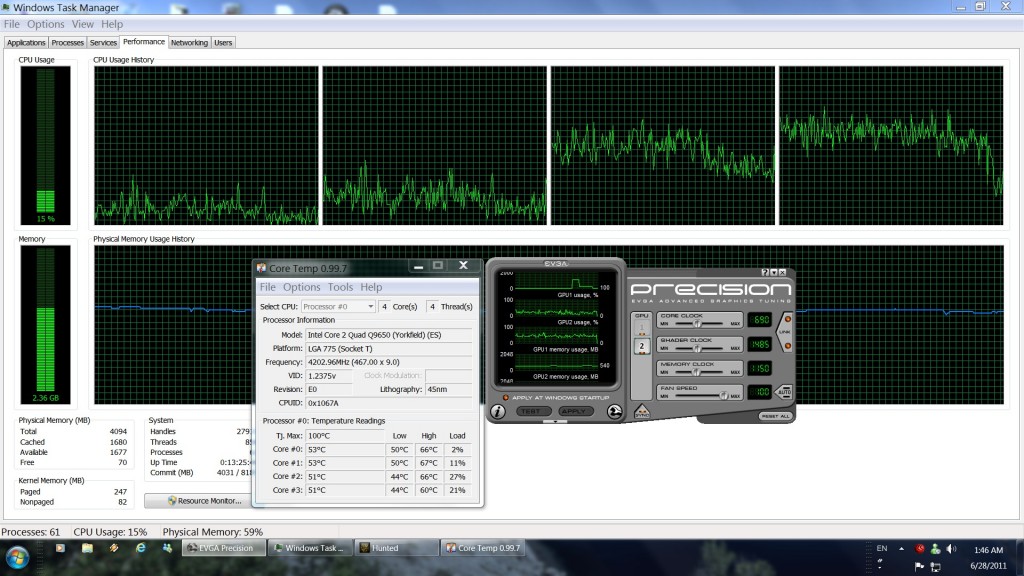 Thankfully, the game is not demanding at all. Hunted: The Demon’s Forge run incredibly smooth with all options maxed out and at 1080p. Our GPU and CPU weren’t stressed at all. We should note it doesn’t take advantage of multi-GPUs. Even though Nvidia has included an SLI profile for it, our second core was barely used. We tried to investigate Nvidia’s profile and found out that its executable filename was not included. And even though we’ve added it via Nvidia Inspector Tool, SLI didn’t kick in. We were also unable to enable Ambient Occlusion via this tool. Still, the game ran with constant 60fps even without a proper SLI profile. On top of that, performance didn’t decrease even when we simulated a dualcore system.

Hunted: The Demon’s Forge is also plagued with some 3D Vision issues. Its 3D profile is not good and the game’s 3D performance is rated as ‘Fair’. Some objects are rendered incorrectly and some other objects are rendered at the wrong depth. 3D Vision owners should avoid running the game in 3D mode for the time being, unless you want to mess with the configuration file and disable a lot of graphical options like the dynamic shadows, motion blur, depth of field and the bloom effects.

Nvidia users might also encounter some graphical flickering issues. When you set your World Detail to either High or Highest setting, there will be some black pixels flickering while moving. As we don’t own an AMD/ATI card right now, we don’t know if this bug is present with them too. In order to fix it, you’ll have to set your World Detail to Medium settings. Players can also enable DX10 via the game’s configuration file. All you have to do is edit the DFEngine.ini file that is located at ‘C:Users\username\Documents\My Games\Hunted\DFGame\Config’. Now search for ‘AllowD3D10=False’ and replace it with ‘AllowD3D10=True’. Be warned though that some graphical options will be changed, so make sure to enter your Video Options next time you start the game. 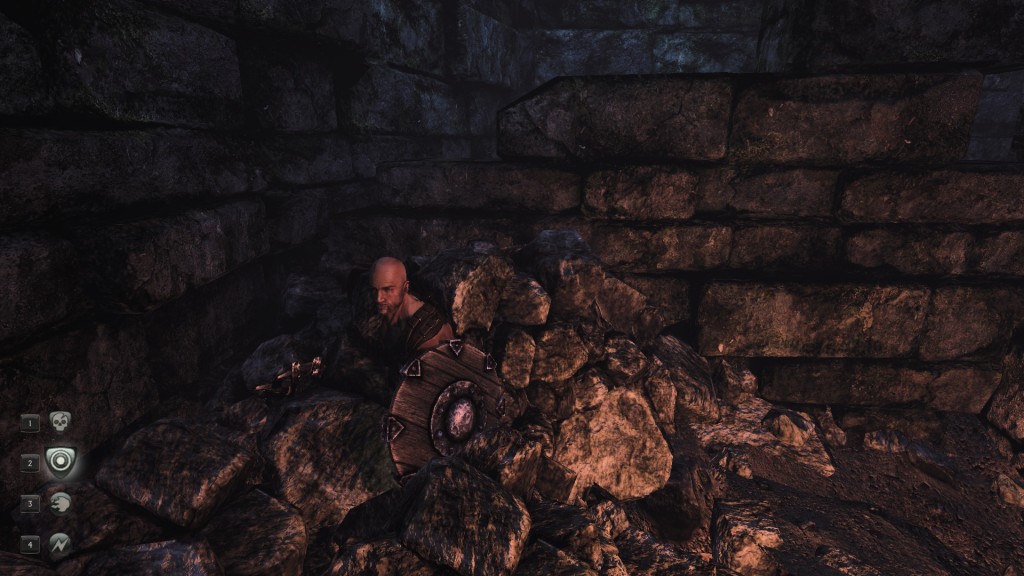 All in all, Hunted: The Demon’s Forge is nothing worth writing home about. The game sports some of the best textures and normal/diffuse maps but that’s it. It is plagued by a lot of compromises that were made for the console versions and although its lighting system is simple and it doesn’t support AO, its biggest graphical issue is that brown-ish ‘Gears of War’ color grading effect. SLI is bugged and Nvidia users will encounter the black pixels flickering bug the moment they set their World Detail to High or Highest. Thank God that the game is not demanding. Due to its low system requirements and despite all the aforementioned issues, it will run fine to a wide range of PC configurations. Let’s hope that inXile will fix some of them with a patch. 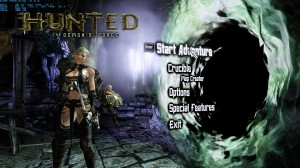 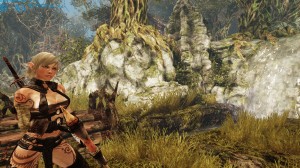 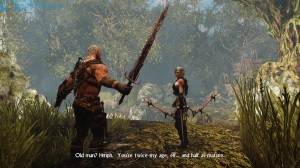 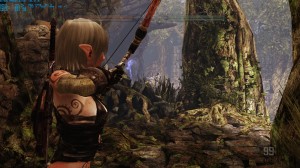 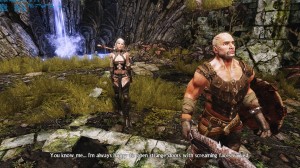 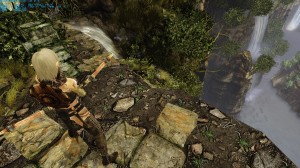 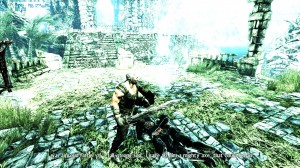 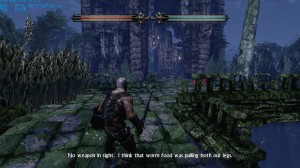 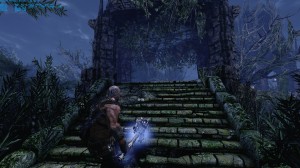 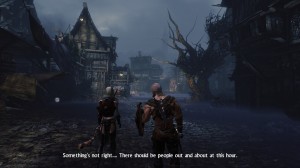 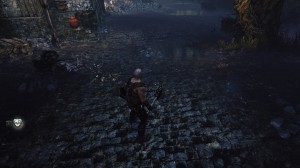 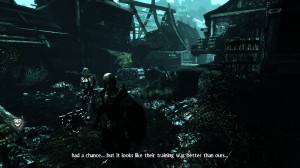 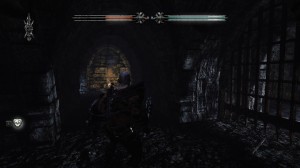 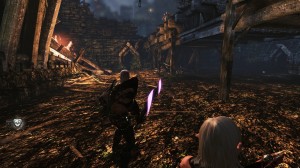 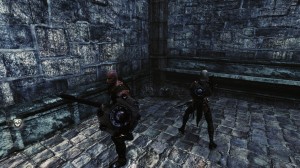 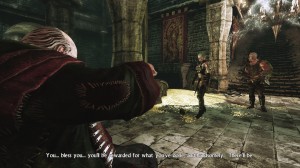 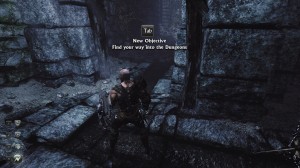 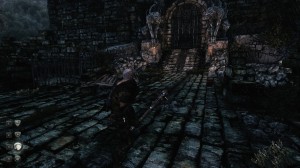 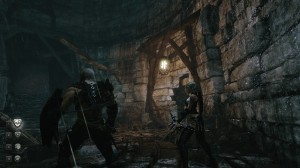