Crysis Remastered is a game we’ve been looking forward to. Unfortunately, and as we’ve already reported, there are major issues with this remaster. For starters, its base version is the PS3/X360 and not the original 2007 PC version. Furthermore, the game still suffers from some awful CPU optimization issues, and uses the Denuvo anti-tamper tech. But anyway, it’s time now to benchmark the game and see how it performs on the PC platform. 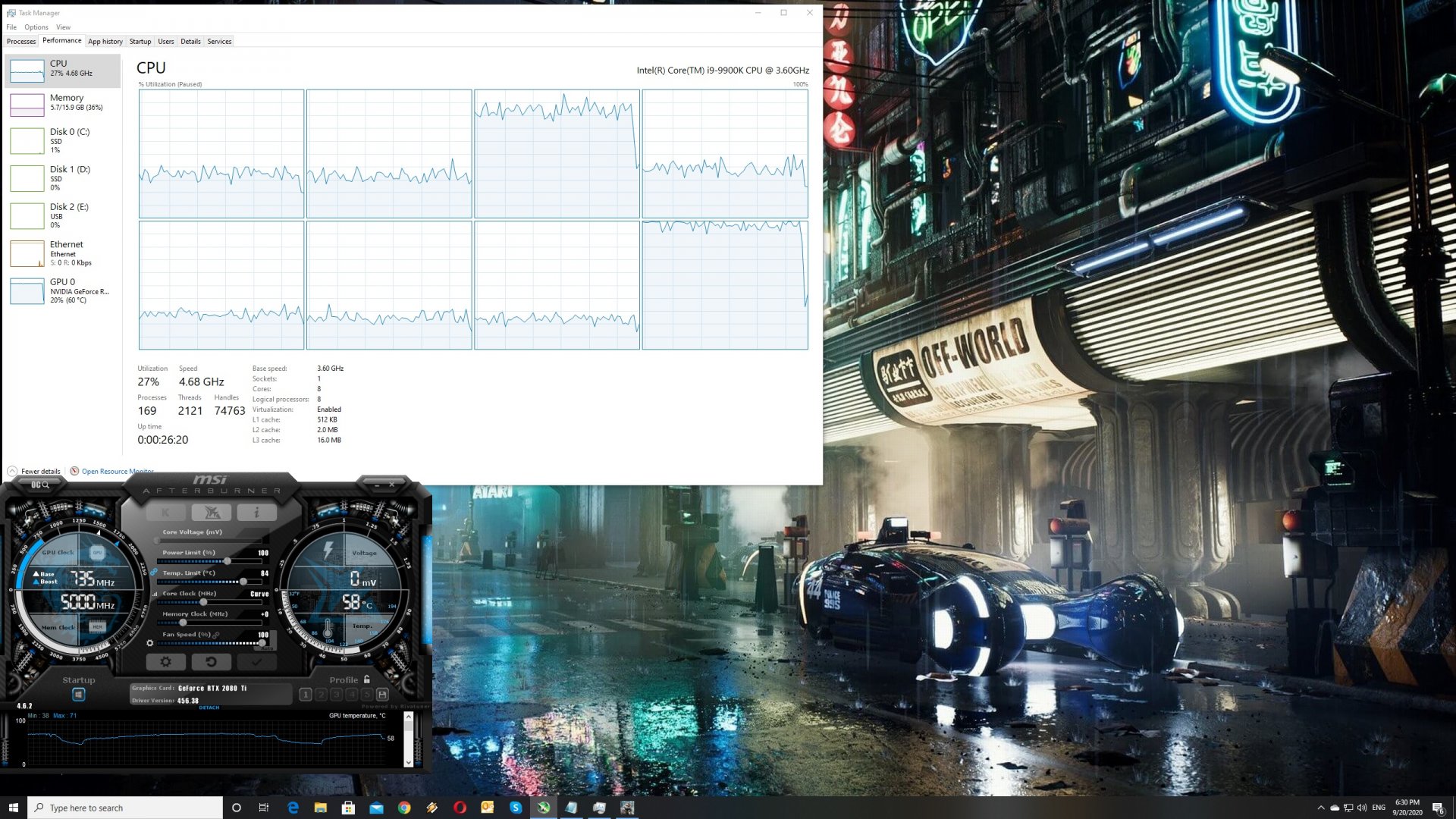 Crytek and Saber have included a respectable amount of graphics settings to tweak. PC gamers can adjust the quality of Textures, Objects, Shadows, Physics, Water and Vegetation. There are also options for Raytracing, Volumetric Effects, Particles, Post-processing and Game effects.

As we’ve already reported, the game uses the DX11 API. Furthermore, Crytek has added a VKRay extension in order to support hardware-accelerated Ray Tracing. While Crytek and Saber have added a GPU and CPU benchmark, we were unable to run them. These benchmarks were constantly crashing to desktop each and every time we tried running them. Thus, we’ve decided to benchmark two different scenes for our CPU and GPU tests. For our GPU test, we’ve benchmarked the scene right before finding Aztec. That specific scene is among the most demanding we could find in the first two levels. For our CPU test, we’ve benchmarked the “sunrise” area (the one you first encounter the Korean soldiers).

Additionally, and given the game’s inability to properly use multi-core CPUs, we’ve used the graphics settings you can find above. These settings will stress both modern-day CPUs and GPUs, and we highly recommend using them.

Crysis Remastered can use up to four CPU cores. However, the game relies heavily on only two CPU cores (it will max out one of them, and will use at around 80% the second core). The other two CPU cores/threads are not used that much. Thus, most modern-day and future CPUs will have trouble running the game on max settings. The only way you can increase your CPU performance in Crysis Remastered is by, you guessed it, overclocking your CPU. In short, Crysis Remastered has similar CPU issues/limitations that affected its original PC version. 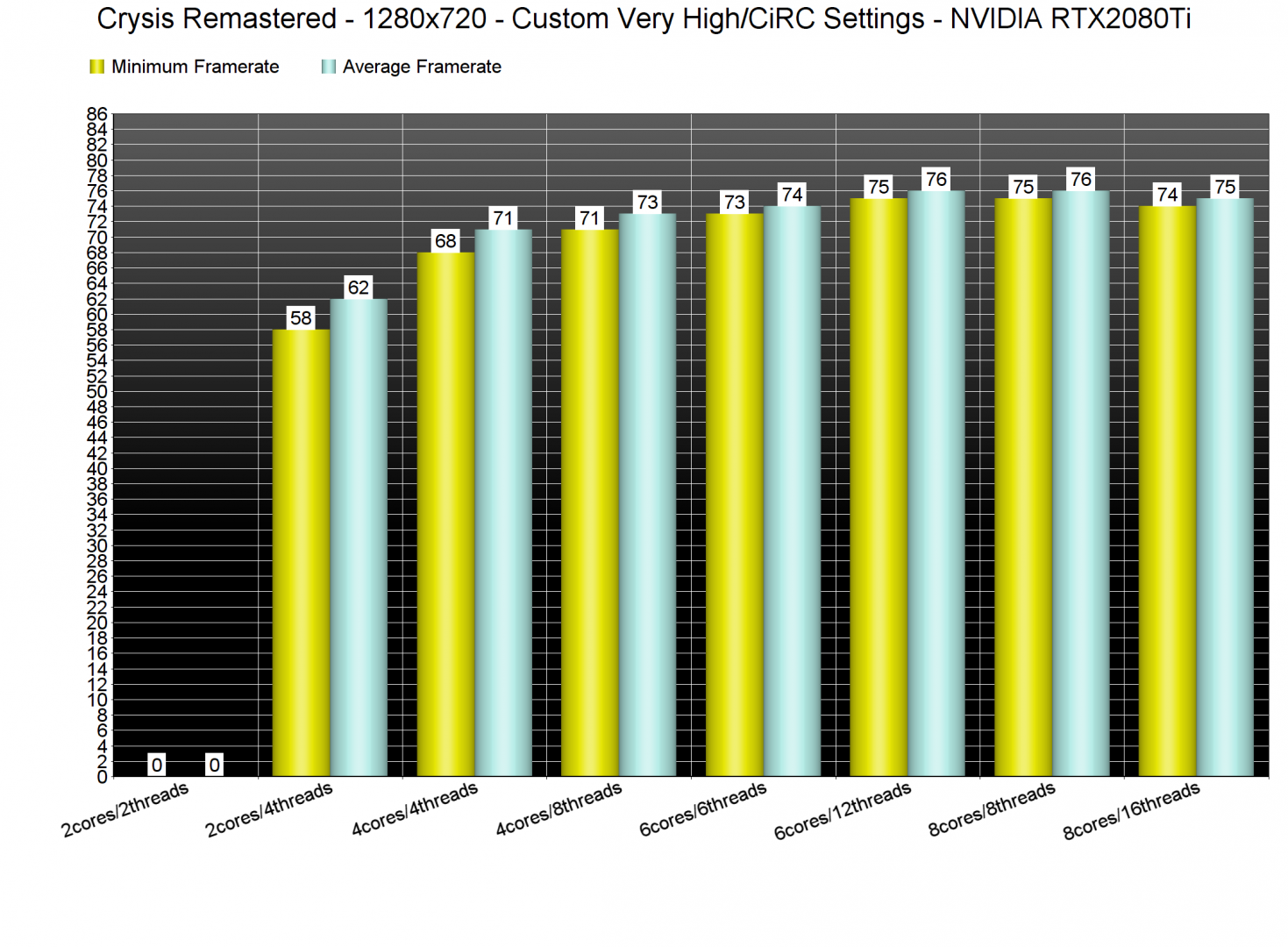 In order to find out how the game scales on multiple CPU threads, we simulated a dual-core, a quad-core and a hexa-core CPU. With Hyper Threading enabled, our simulated dual-core system was able to run our custom CiRC/Very High/High settings at 1280x720 with almost 60fps. There were some drops to 58fps, however, the game felt smooth with those settings. Without Hyper Threading, our simulated dual-core system was unable to run the game due to severe stutters. 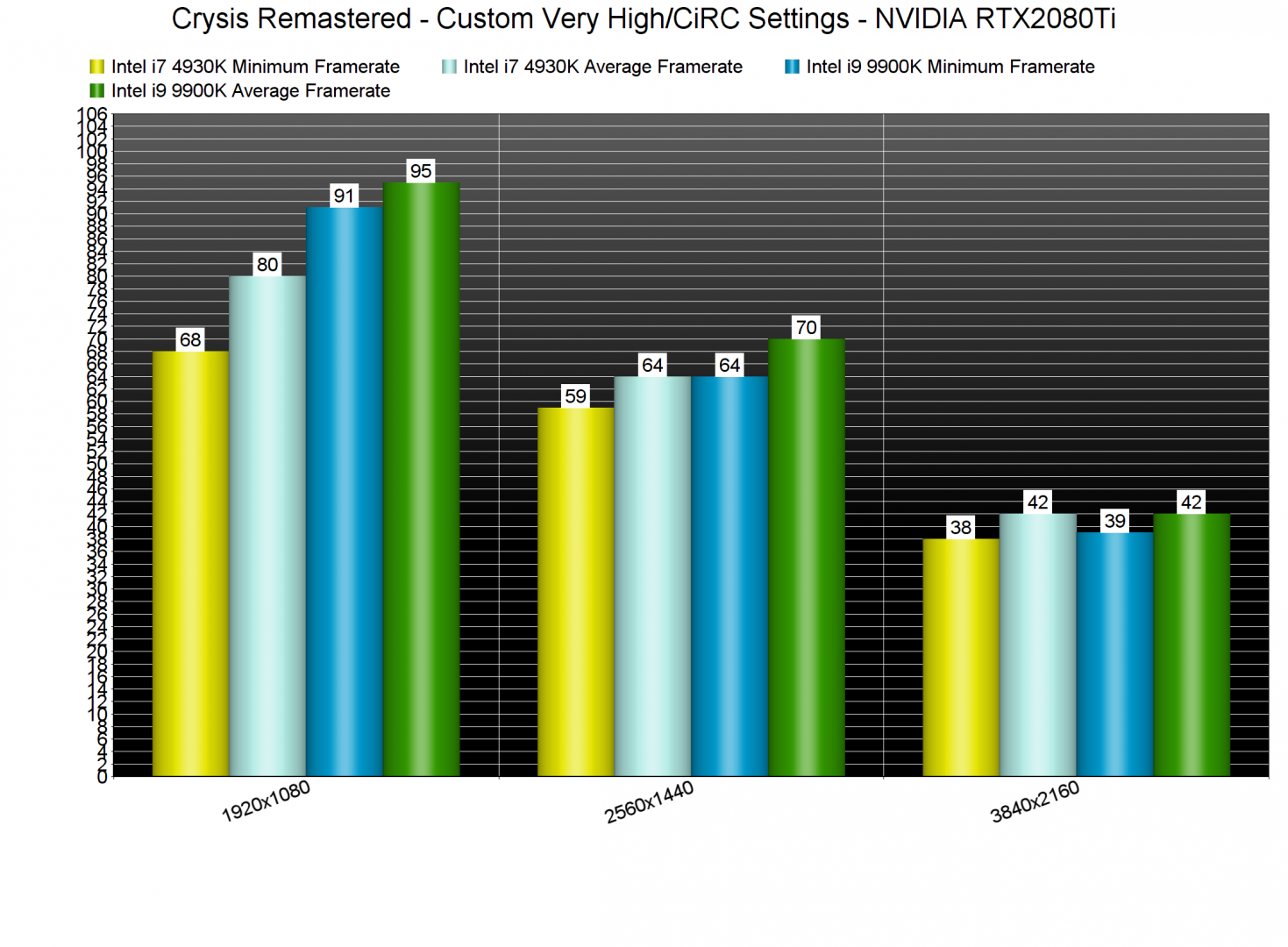 Crysis Remastered also appears to be running better on NVIDIA’s hardware. With our custom settings and at 1080p, our AMD Radeon RX580 was able to only push 20fps. On the other hand, the AMD Radeon RX Vega 64 performed similarly to the GTX980Ti. We don’t know whether AMD will be able to improve the game’s performance via future drivers. Therefore, and for the time being, we strongly suggest using NVIDIA’s GPUs for this particular game. 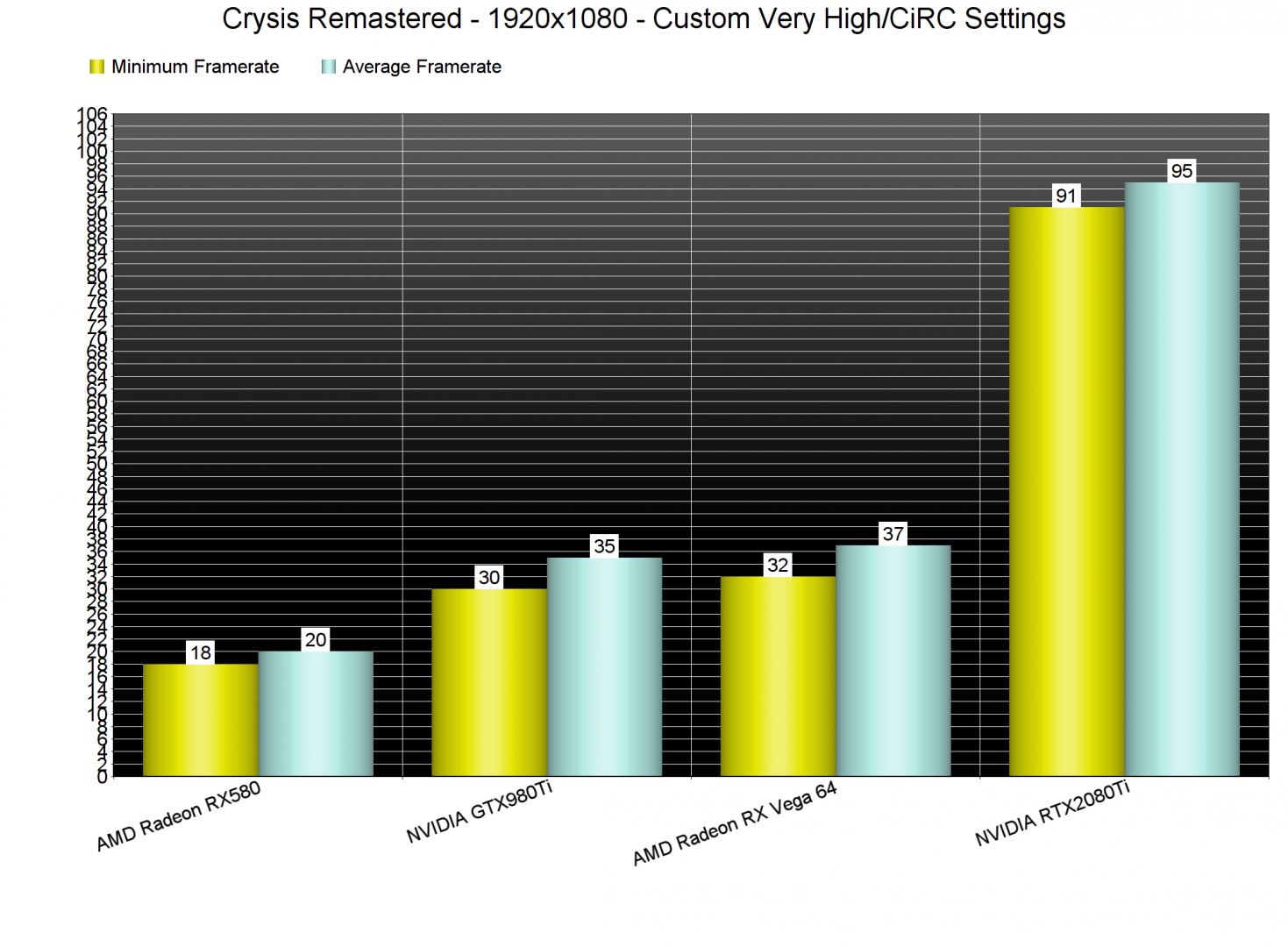 The only GPU that was able to offer a smooth gaming experience with our custom settings with the NVIDIA RTX2080Ti. NVIDIA’s GPU was able to run the game with 60fps at both 1080p and 1440p. In 4K, the RTX2080Ti was able to push a minimum of 39fps and an average of 42fps. 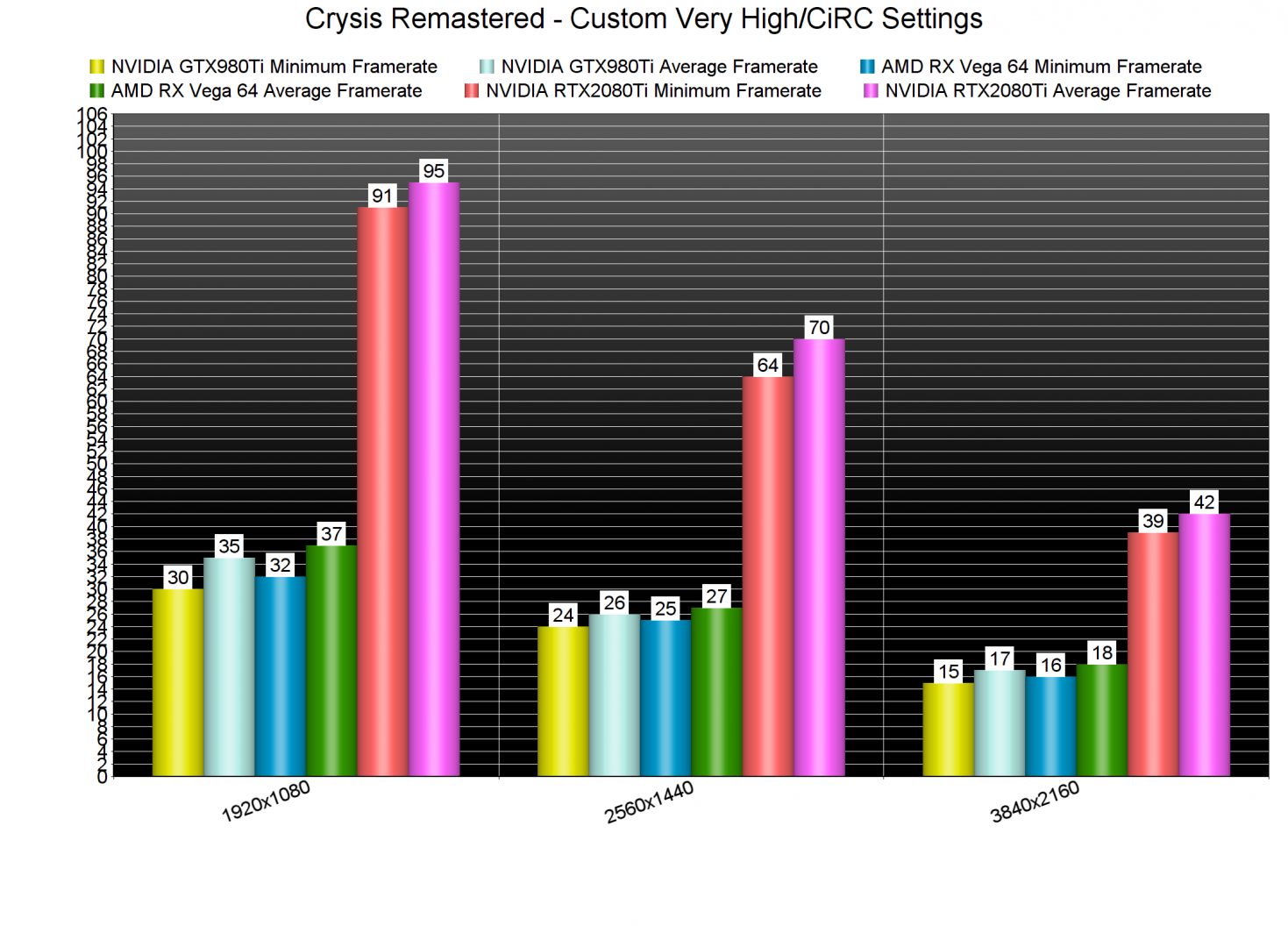 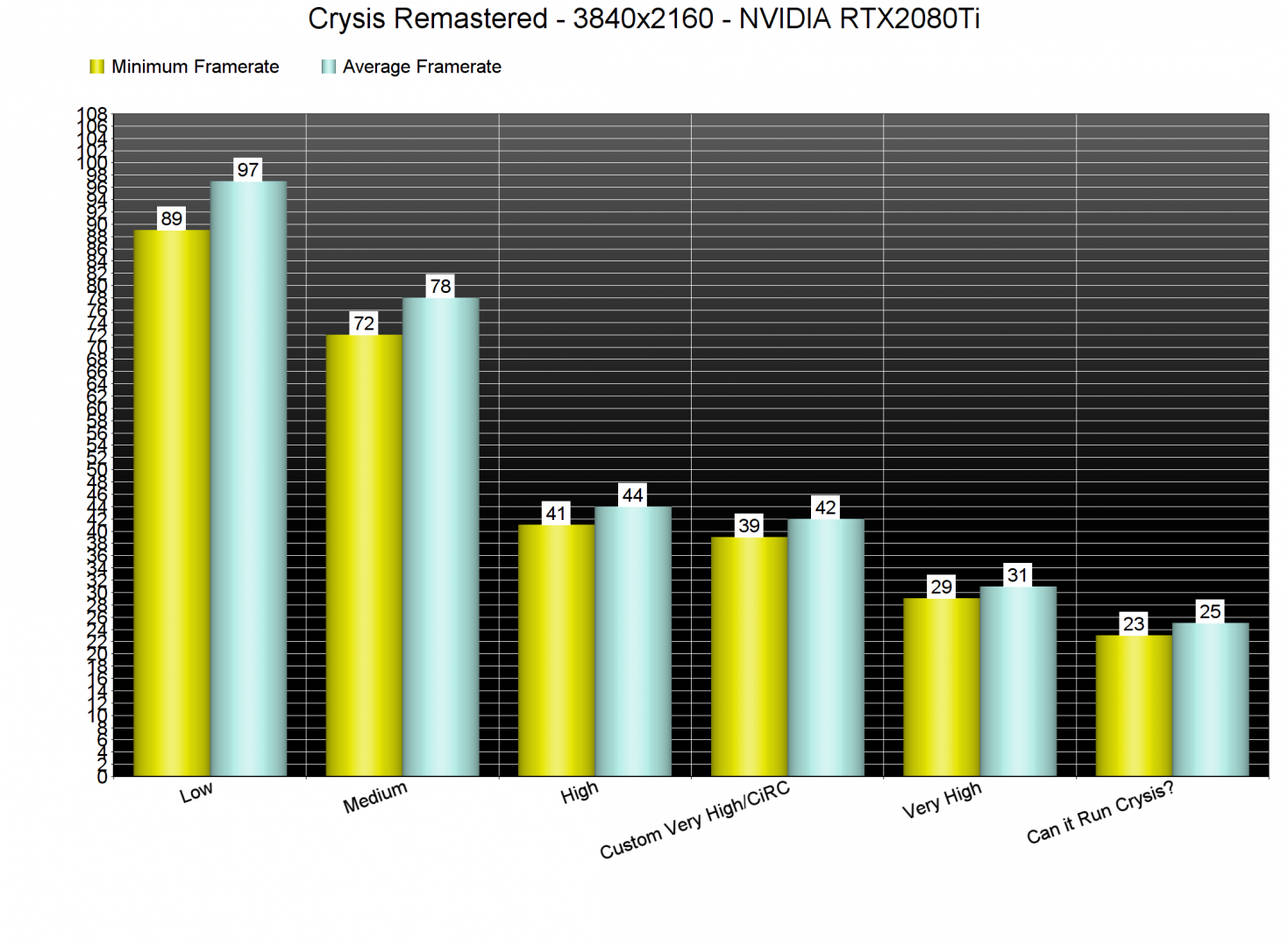 Graphics-wise, Crysis Remastered can still look great. Most of the main characters are highly detailed, and the game’s environments are still gorgeous. Seriously, there is a reason why everyone considers Crysis to be a game that was way ahead of its time. The new textures also look great, though we did notice some original, blurry, low-resolution textures. And while, the environmental interactivity/destructibility remains amazing, even for today’s standards, it has been dialed back from the original PC version.

However, and while Crysis Remastered can – at times – look gorgeous, it lacks some of the graphical features of the original 2007 PC version. Grenades do no longer affect bushes in the remastered version. All trees and bushes do not sway as much as they did in the original game, giving the remaster a somehow “static” feeling. This is a personal preference though as all trees and bushes do have “wind/air effects“. They are just not as “in your face” as in the original game. Crytek and Saber have also changed the game’s Parallax Occlusion Mapping effects. As such, and while some areas look better, some other areas are “more flat” in the remaster.

In conclusion, Crysis Remastered is a far cry from what we were expecting (see what I did there?). While the game can look great, it does not justify its GPU requirements. The game also suffers from major CPU optimization and stuttering issues. PC fans will be also disappointed by the dumbed-down “classic” nanosuit, physics and control issues. I suggest reading my previous article about the differences between the remaster and the original PC version. Unfortunately, Crysis Remastered is a big disappointment. Crytek and Saber will have to put a lot of work in order to fix this mess. Until they do, we suggest sticking with the original 2007 PC version!