Rocket Lake (RKL) is a planned microarchitecture designed by Intel as a direct successor to the Comet Lake-S series of desktop CPUs and high-performance mobile devices. These were expected to hit the market by the end of this year, but the roadmap from Intel paints a different picture.

Intel has been using the same iteration of the 14nm FinFET process node with the Skylake Architecture for many years. Comet Lake-S was also fabbed on this aging process node, which has held Intel back in terms of IPC uplift and efficiency gains over AMD’s Ryzen lineup. Rocket Lake-S desktop platform is going to be the last CPU architecture to be based on an advanced 14nm process node. Intel’s Rocket Lake will use a 14++ nm back-port of the Willow Cove core architecture. 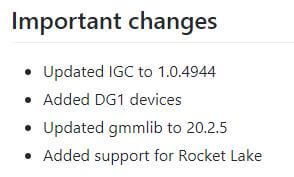 Few months ago one VLSI engineer who goes by the name @Retired Engineer on Twitter, @chiakokhua, tweeted one of his old findings from November 2019 last year. According to him the upcoming Rocket Lake-S processors are going to feature ‘multi-chip modules/MCM’ of core and uncore GPU dies built on different silicon fabrication nodes. This is speculation from his side, but he has a strong record of accurate prediction in the past, when he spoke about the 3rd gen Ryzen Matisse AM4 processors being multi-chip modules as well.

Apparently, it might be possible that Intel is also designing these socket LGA1200-based Rocket Lake processors to feature multi-chip modules, similar to Matisse in some way. According to the block diagram posted by @chiakokhua, we can see that the Rocket Lake-S architecture is a multi-chip module consisting of a 14nm die that holds the ‘CPU cores’; and a 10 nm die that holds the ‘uncore’ components. But in the case of Rocket Lake the uncore die is more advanced that the CPU die.

The CPU die is fabbed on a 14 nm node on Rocket Lake-S, which contains the Willow Cove CPU cores in this die, and a system agent, which are connected together by a Ring-bus interconnect. And the system agent connects to the 10nm uncore GPU die via EMIB. The 10 nm GPU uncore die on the other hand features the Gen12 XE iGPU with up to 96 EUs, a dual-channel DDR4 memory controller, a PCI-Express 4.0 controller, as well as display and media engines. Rocket Lake-S MCM provides a total of 24 PCI-Express lanes, out of which 16 are assigned as PEG (PCI-Express Graphics), and 8 lanes are assigned as chipset bus. Comet Lake-S CPU lineup only provided us with 20 lanes.

Rocket lake-S CPUs are going to support the PCIe 4.0 standard and interface, and as per some rumors these might launch at the end of this year, or early 2021. The 11’th gen Rocket Lake-S desktop CPUs are also going to be compatible with the Z490 chipset and LGA 1200 socket motherboards. But this places Intel’s Z490 platform longevity in a difficult position, since the company won’t be supporting the LGA 1200 socket for long.

LGA 1200-based motherboards are probably not going to stay for a long time, as the current Z490 chipset is only expected to support Comet Lake-S and Rocket Lake-S CPU series, since Alder Lake-S is already rumored to feature a new LGA1700 socket.

Speaking of next-gen Intel processors and platform, GIGABYTE confirmed that their Z490 AORUS lineup of motherboards are going to support limited PCI-E 4.0 capabilities on Comet Lake, which seems obvious since the Intel’s 10th generation Comet Lake-S series of processors do not fully support this new PCIe 4.0 standard. Since hardware-level support for PCIe 4.0 is already built-in these Z490 boards, only Rocket Lake CPUs are going to offer full compatibility of the PCIe Gen 4.0 standard. PCIe 4.0 has been an AMD-only feature within the consumer market till now, but things might change with the launch of Rocket lake-S CPUs.

For GAMING perspective, both Comet Lake and Rocket Lake are relevant for gamers looking to upgrade their systems. There is some good news with regards to the LGA 1200 socket platform though. Noctua, an Austrian hardware manufacturer of CPU coolers and computer fans primarily for the gaming enthusiast market, has already confirmed that some of its current CPU coolers are compatible with the LGA 1200 socket motherboard, so this is one thing gamers need not worry about. Expect other manufacturers to follow suit.

Cooler compatibility seems possible since the LGA 1200 socket has the same dimensions as LGA 1151 socket (37.5mm x 37.5mm), so some CPUs coolers are going to work. Though make a note that Comet Lake/Rocket Lake is NOT electrically or mechanically compatible with Coffee Lake-based motherboards, due to the shift in the socket keying.