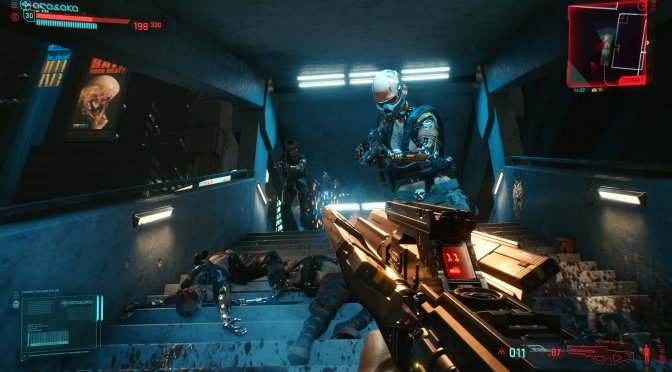 CD Projekt’s upcoming role-playing video game Cyberpunk 2077 is one of the most anticipated titles to release later this year. The game will take place in an ‘open world’ with many different weapons, and playstyles, along with the ability to steal cars. So based on this it is obvious that some of the players will turn their gameplay experience into “Grand Theft Auto” to wreak as much havoc as possible.

Yes, you can play Cyberpunk 2077 like it’s another GTA 5 game, but according to CD Projekt Red, this may not be a very good idea. The developers want you to try other options, and dig deeper into the Game.

This is according to Cyberpunk 2077’s level designer Max Pears, who told PCGamesN that, “If you want to go out on a rampage and have no remorse, then you have got the option, and that’s fine with us.” However, it seems the more players progress, the more they’ll be tempted to try out some of the upcoming PC game’s other, less, er, excitable options.

“However, once you start to play the missions and see the amount of options you have,” Pears tells PCGamesN, “I think that will make players stop and think a little bit before doing something reckless. “We’ve seen a lot of people default to that ‘GTA mode’ and then after a little bit they realise how many things are different and adjust how they play.”

The Polish developer confirmed that players will be able to go on remorseless rampages like many do when playing ‘Grand Theft Auto’. However, according to the developer this playstyle will usually change once players figure out all the systems at play. Cyberpunk 2077’s level designer Max Pears has stated that players may not necessarily stick with a Grand Theft Auto playstyle all the way through once they see how many other different options they have at their disposal.

From what we have seen thus far there are multiple ways to play Cyberpunk 2077. You can either brute force through everything, or better yet take the subtle hacker approach for instance. There really is no wrong way to play the game, and each mission can be approached via multiple solutions. As such, sticking with only one solution or playstyle for that matter is not fully encouraged because another solution might be more fun or interesting to explore.

As of now it is unclear whether the game will allow players to kill important NPC characters and quest givers, since this hasn’t been fully confirmed yet. Nevertheless, this game is different than ‘The Witcher 3: Wild Hunt’, which didn’t allow players to kill NPCs. Apart from doing missions and other story-related content, there will most certainly be an opportunity to explore ‘Night City’ and see what it has to offer. Players can also cause chaos and engage in shootouts with gangs as well as the law enforcers, similar to Grand Theft Auto.