Ubisoft has announced that Watch Dogs Legion’s latest update, Title Update 4.0, will release on May 4th. Ubisoft was planning to release this update in April. However, the team encountered some issues and needed more time in order to resolve them. 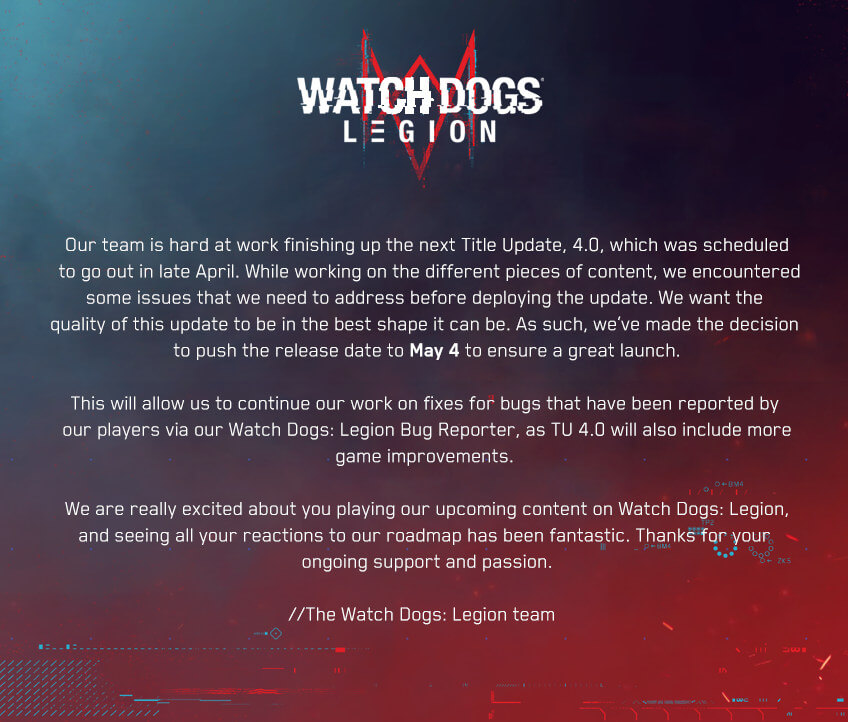 This upcoming update will also resolve a number of bugs that the game’s players have reported. Moreover, it will pack more game improvements.

In Watch Dogs: Legion, gamers can play as anyone. Players can build a team with a huge range of characters to choose from, all bringing their own unique abilities. Additionally, players can customize their Legion with enhanced gadgets, unique outfits and iconic masks.

Players will be able to hijack armed combat drones, reconstruct past events using augmented reality, and hack their way through the most advanced security systems. Players can also upgrade and deploy tech gadgets such as the Stealth Cloak, the Spiderbot, a Micro-Missile Launcher, and the powerful Electro Fist in a brand new melee system.

From what we know so far, cross-play will be coming to the game via a future patch. There is also an officially Ubisoft-approved mod for the game that you can download.

Lastly, Ubisoft has not revealed the changelog for this upcoming update.