By now you must have already heard that the DX11 mode of Batman: Arkham City is bugged. However, things are not looking good even for those that want to enjoy Rocksteady’s latest offering with Nvidia’s PhysX effects. Guru3D’s user ‘MfA’ shared some interesting graphs that showcase an enormous performance hit when PhysX effects are enabled. This is something we’ve discussed in the past as Batman: Arkham City doesn’t take advantage of the PhysX SDK 3.0 and MfA’s graphs show exactly what is wrong with all previous PhysX SDK versions.

MfA tested Batman: Arkham City with a system similar to ours – Q9650 at 4.25Ghz with a GTX460 and 4GB RAM. We seriously don’t know why Rocksteady decided to use PhysX SDK 2.8.4. We assume that the company wants gamers to enjoy their game but how can anyone enjoy it when the performance hit is so big? Even a 9800GT – as a dedicated PhysX card – is not enough for the PhysX calculations that were introduced in Batman: Arkham City and PC gamers will need a high-end SLI solution in order to enable and enjoy those PhysX effects. What’s really funny here, is that the CPU solution is only 8fps slower than the GPU hardware accelerated one. Pay extra attention to the last graph as it was taken on a really low-res in order to avoid any extra GPU limitation.

PhysX is a good solution but right now, every version – prior to 3.0 – is a coding mess. That’s precisely why we were worried when we first heard that Batman: Arkham City won’t be using the latest 3.0 PhysX SDK. And as with all previous PhysX games, those with Intel’s i3/i5/i7 CPU series will see better results.

So here are the MfA’s graphs. Bottom line is this: if you want to enjoy Batman: Arkham City with all the best and whistles, you’ll need a top of the line PC system. Do those extra PhysX effects though justify the huge PC requirements? You’ll be the judge of that! 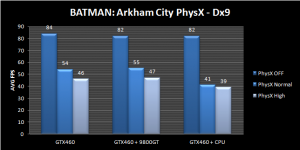 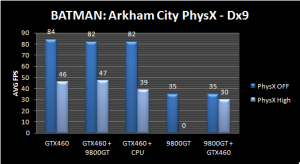 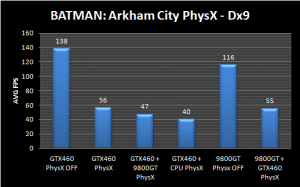