This weekend, a number of artworks and screenshots were – supposedly leaked – from a game that is said to be developed by Valve. As with most rumors – that do not seem plausible – we decided to take a backseat and watch how things unfold. And here we are today, with a message from Valve’s Marc Laidlaw, suggesting that someone is trolling the community and that it’s definitely not he.

First things first though. NeoGAF user ‘angular graphics‘ has done a little research and figured out their real origin. According to the NeoGAF’er, these images were present on Peter Konig’s portfolio website who no longer works at Valve. Not only that, but the concept arts were uploaded seven whole months ago, meaning that these shots are as brand new as the old concept arts of HL3 that were unveiled back in June.

What’s also interesting is the fact that there were some clips of SOB a couple of months ago, spotted by ValveTime. Naturally, you can view them below and these videos suggest that Valve was working on (or at least experimenting with) a space game. 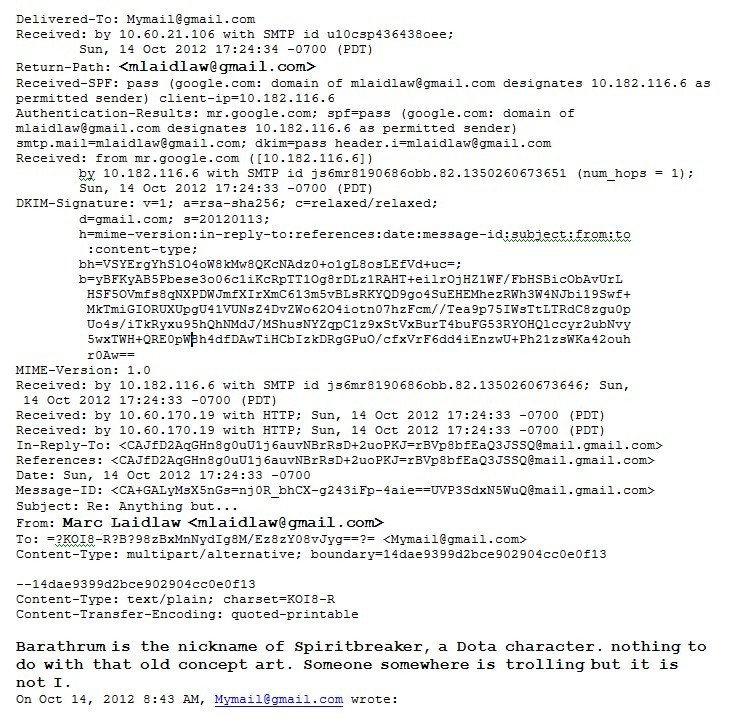 And now to the interesting part. Although Valve has not revealed any working name on this title, this weekend’s leaks suggested that the game was called ‘Stars of Barathrum.’ However, that’s not the case and that comes from Valve’s Marc Laidlaw. According to Marc – thanks to Steam’s community member ‘timer21001’ for sharing this mail – those artworks were quite old. Not only that, but Barathrum is the name of a DOTA character and had nothing to do with the space project.

“Someone somewhere is trolling but it is not I.”

So there you have it everyone. These concept arts were made available to the public seven months ago, however Laidlaw did not reveal whether Valve is still working on this space project or not. He did reveal though that the name is incorrect and that someone is trying to troll by posting this kind of things.

Naturally, only time will tell whether Laidlaw was right or wrong (and whether that was a damage control attempt). For now, enjoy the video footages of SOB that were revealed a couple of months ago!