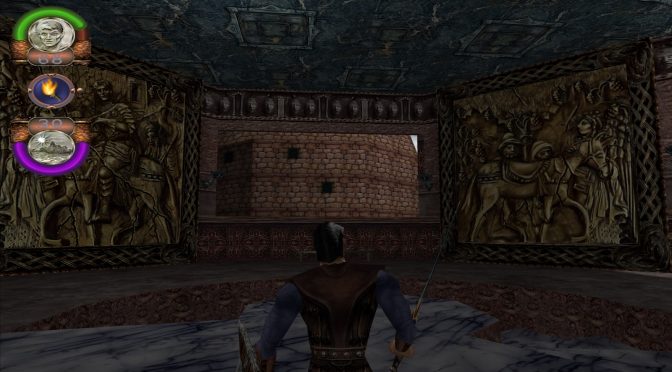 Now here is something special for Turok 2 fans and for all those that remember Crusaders of Might and Magic. Thanks to the latest AI-enhanced techniques, a new HD Texture Pack has been released for them.

Created by ‘elvis09’ (kudos to Sergey for informing us), this Texture Pack uses ESRGAN in order to overhaul the game’s textures. Unfortunately elvis09 did not provide any comparison screenshots, however you can find below some screenshots showcasing the modded version in action.

Crusaders of Might and Magic is a third-person action RPG that came out in 1999. Since we’re talking about a 1999 title, you should not expect to be blown away by its visuals. Furthermore, I have to be honest that I was not impressed by the visual improvements, especially after witnessing the incredible results that we got for Doom and Morrowind.

But anyway, I’m pretty sure that the two die-hard PC gamers that have kept the CD for Crusaders of Might and Magic will be delighted to replay this game with better textures. If you are one of them, you can download the texture pack from here.

As for Turok 2, the ESRGAN AI-enhanced Texture Pack was created by modder ‘collige’ and upscales all textures by up to 4X of their original resolution using ESRGAN. Unfortunately the modder did not share any additional screenshots to showcase the upgraded textures other than one featured below. Still, those interested in it can download it from here.