Good news for all PC gamers as Tomb Raider has been unlocked in a couple of regions, meaning that we’ll be getting a lot of screenshots and videos today from the PC version of Crystal Dynamics’ Lara Croft game. Below you can find the in-game graphical options that are supported, as well as the first video that showcases AMD’s new hair technique, TressFX (from YouTube’s member ‘Stephen Delvecchio’). According to a lot of users, TressFX brings a significant performance hit. We’ll have a Performance Analysis about it in a couple of days, so stay tuned! 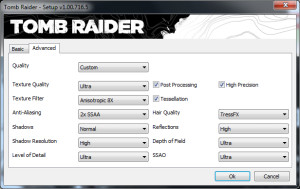