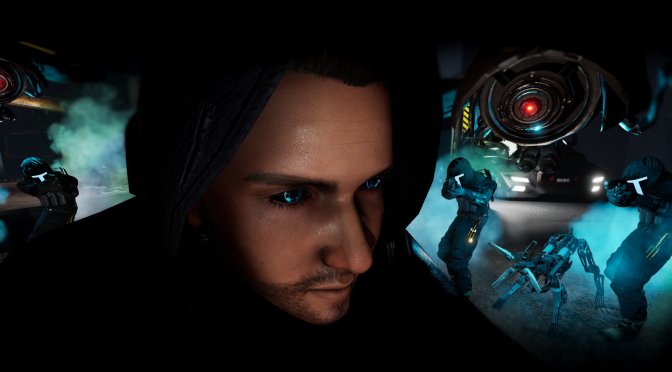 Logic Nine is currently working on an indie open-world Cyberpunk RPG, called The NOTHING. The game takes place in a dystopian Los Angeles, in the year 2108 and its story is centered around the PXL Corporation and the unstoppable control they have over the world, the mistakes they made and the terrible horrors that are uncovered about their operations.

In The NOTHING, players will assume the role of Dresden; a skilled systems engineer who presently works for PXL and lives in the utopian city outside Los Angeles.

“Dresden’s mother (who also lives in the Utopia) develops a sudden and rare cancer. Her bank account balance is incapable of providing her with medical care without causing her to be deported, which ensures she will certainly die. As such, Dresden makes a decision to save his mother by giving up his entire wealth to help her.

Dresden is immediately deported and ousted from the utopian ecosystem and cast into the starving, suffocating and dying city of Los Angeles.

While being deported, Dresden is brought to an office where he meets with a PXL exec, Damon Knight. Damon is impressed with Dresden’s sacrifice to save his mother and makes the statement “you are exactly the type of person we want living amongst us”.

Damon makes an offer — PXL will take care of his mother and allow him to return to the utopia, in exchange for the implementation of his “field expertise” with PXL systems and their advanced inner workings.

Dresden is asked to “infiltrate” the networks, systems and communications of known organized “terrorists” who may be intending on breaching or harming the utopian ecosystem. “Simple observe and report”, as Damon puts it.”

Logic Nine aims to launch a Kickstarter campaign later this month, and released an announcement trailer that you can find below. A successful Kickstarter will provide more missions, better graphics, a bigger, more immersive world and perhaps a multi-player mode.

Enjoy the game’s teaser trailer and first screenshots, and stay tuned for more!