Okay everyone, it’s time to celebrate as Steam has proved – once again – how awesome it can actually be. Steve Hunt, creator of Beat Hazard and CEO of Cold Beam Games, has announced that his indie music arcade title, Beat Hazard has surpassed 2 million sales. Pretty awesome right? What’s even better is that the PC version has outsold all the other versions, combined.

In case you were unaware of, Beat Hazard is music driven twin stick shooter. It takes tracks from your music collection and uses the power of that music to drive game play.

Steve shared some interesting graphs yesterday, showcasing the game’s sales these past two years. And look and behold; the mighty PC version is by far the most successful one. Guess that piracy could not affect Steve’s game then. But then again, PC gamers are greedy little pirates, right? What gives?

The key point here is Steam’s special deals. As we can see, Steve’s indie title has been benefited from such offers, which is precisely why indie developers should after such things.

Steve has also attacked Sony and Microsoft, stating that ‘console holders really need to take a leaf out of their book. They should lighten up and allow developers to more easily interact and respond to their community of players.’

Steve concluded that Valve treats incredibly well its developers, as Steam has an excellent API which is very easy to work with, it doesn’t have a certification process and indie devs can upload a new version of their game any time they want. 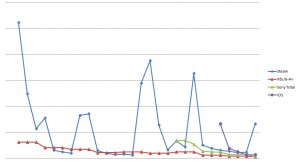 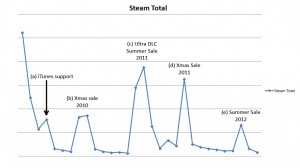 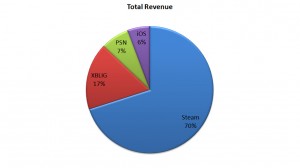