The AMD Radeon RX 6700 XT is based on the Navi 22 silicon. We have not heard much about its sibling, the Navi 23 GPU which is also going to compete in the mid-range GPU market segment.

But now some details on AMD’s upcoming Navi 23 GPU along with specs have been shared by a known and reliable leaker @KittyYYuko on Twitter.

In case you didn’t know ‘Sienna Cichlid’ is the rumored codename for the Navi 21 GPU silicon, whereas Navi 22 is codenamed as ‘Navy Flounder’, and the Navi 23 GPU has been given the codename ‘Dimgray Cavefish’.

The “Dimgray Cavefish” codename has already appeared before in several Linux and macOS patches/code.

Navi 23 GPU lineup is to be featured in either the Radeon RX 6600 or RX 6500-series GPUs, depending on AMD’s planned roadmap. Though, Navi 23 GPU silicon will most likely land up in the Radeon RX 6500 series of graphics cards instead, since the RX 6600 XT is expected to utilize a 192-bit bus interface which is only possible with the Navi 22 GPU core.

According to the leaker @KittyYYuko, the Navi 23 GPU is expected to feature 32 Compute Units, which means a total of 2048 Stream Processors/cores. Additionally, the chip will have a 128-bit wide memory bus interface, and the card will sport 8GB GDDR6 VRAM. The memory is expected to be clocked at 16 Gbps.

The leaker also mentions 64 MB of the Infinity Cache on this GPU, and the die size is going to be 236 mm2, 100 mm2 less than Navi 22. The GPU targets the 1080p gaming segment which makes sense given the modest specs. 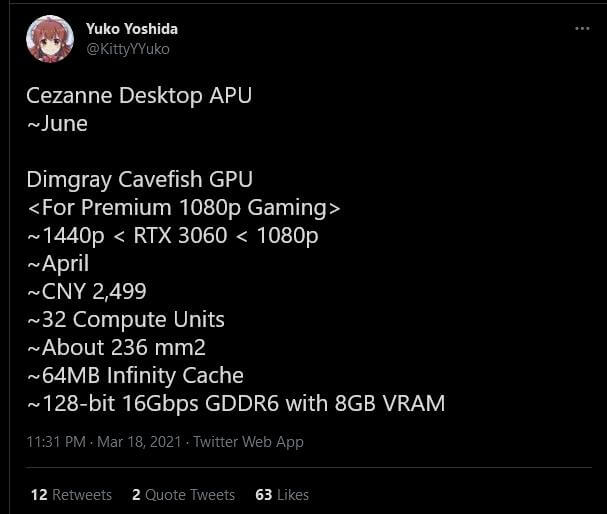 AMD Navi 23 is said to offer a ‘Premium 1080p gaming’ experience, because AMD Navi 21 GPU lineup targets 4K gaming, and Navi 22 is advertised as a perfect GPU for 1440p by the red team.

This GPU would be costing around 2499 CNY, which amounts to roughly $384 USD. It remains to be seen whether these specs will turn out to be true though.

On some other AMD Navi GPU leak, back in January 2021, Phoronix reported that AMD’s RDNA2 GPUs will have a power management feature dubbed as Duty Cycle Scaling (DCS), as discovered in a recent Linux patch.

This feature aims to either temporarily boost performance or reduce the power consumption based on some GPU parameters.

As noted by Phoronix, the new Duty Cycle Scaling (DCS) feature can basically reduce the power consumption of the GPU in order to meet certain TDP requirements set by AMD. So this feature will turn off the GPU graphics core temporarily, when the card is under heavy load, and then turn it back on once a certain requirement is met.

However, this Duty Cycle Scaling feature is actually designed for “small power limit SKUs”, so basically the high-end and midrange GPUs don’t actually fall in this category, however, AMD can implement it in future GPUs if required.

The graphics firmware will power down the GPU during heavy workload, since the firmware controls this new DCS functionality. During any heavy workload, once a particular limit has been reached the graphics core can be temporarily shut down, and then powered back depending on certain power and/or temperature envelope values.

The on and off start time and duration is determined by the firmware itself.

According to Phoronix, AMD’s GPUs also support the GFXOFF feature, which is used to shut down the GPU cores when they are idling, which is not the same as this DCS functionality. Duty Cycle scaling is just used to cope with high thermals and power use when under load, unlike GFXOFF.

According to the recent Linux patch there are actually two types of DCS, mainly Async DCS and frame-aligned DCS. Async will just shut down the graphics core based on GPU’s thermal, current, and power parameters.

The frame-aligned DCS on the other hand is designed to shut off the graphics core after it renders a frame, which means the GPU “power cycle” would happen between frame renderings.

In order for this DCS feature to work properly, it has to be supported by the GPU, its firmware, driver, and the operating system/OS. Else, it won’t function.

Back in September 2020, AMD added support for NAVI 23 GPU in the Linux OpenGL driver, which was codenamed as “Dimgray Cavefish”. We can easily figure the codename Navi 23 because AMD has provided the same hexadecimal range between ‘0x3C to 0x46’.

The latest entry in the RadeonSI Gallium3D open-source driver was for AMD Dimgray Cavefish as well as Van Gogh mobile APU. The Mesa 20.3-devel now has support for both ‘Van Gogh’ and ‘Dimgray Cavefish’ as well.

Lastly, some AMD Navi GPUs are also rumored to get a new ‘Power Saving’ feature dubbed as MALL.

According to one report published by Phoronix, AMD appears to be reportedly working on a new feature called Memory Access at Last Level (MALL) for its upcoming next-gen RDNA2-based Big Navi graphics cards.

The new feature was spotted in the AMDGPU open-source Linux kernel graphics driver/patch, and according to Phoronix even though the Linux patches don’t explain MALL in detail, but the Linux publication thinks that this has something to do with an improved power saving feature for AMD’s upcoming Big Navi GPU lineup.

MALL may apparently belong to AMD’s Display Core Next (DCN) 3.0 feature set, but not all Navi cards will have this feature. As of now, only Sienna Cichlid seems to support MALL.

As outlined by Phoronix, “MALL/Memory Access At Last Level is a DCN 3.0 feature for enhancing power savings with the screen contents coming from the “MALL” when certain conditions are met. At least at this point the support is only enabled for Sienna Cichlid and not other variants like Navy Flounder”.

At this point there is no information to suggest that MALL will also be available on the Navi 22 (Navy Flounder) or Navi 23 (Dimgray Cavefish) GPU lineup. It appears that this new MALL feature is meant to provide access to the display controller to the memory hierarchy level below VRAM.

If one would have to make an educated guess, then the MALL/Memory Access at Last Level feature could probably suggest some kind of technology to access the last level of memory in a similar way to what most modern low-level APIs do. Though, this is just pure speculation.

It could also be a new technique that could eventually mean saving energy consumption when accessing the data hosted in GPU memory. AMD will need to explain what exactly it does and how it works though.

It will be interesting to see what effect MALL will have on the efficiency of the new RDNA 2 GPU architecture.