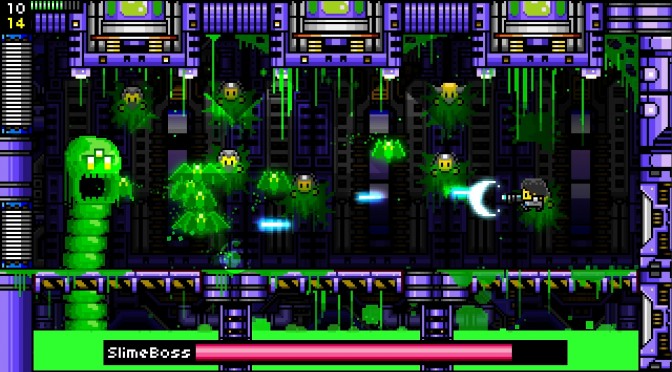 Council of Science today announced the launch date for their next transgalactic space mission. Rex Rocket, a retro 2D platformer that offers more than nostalgic 8-bit visuals and catchy chiptune music, will release for PC on the Steam Store on August 5th.

Inspired by the glorious retro days of 8-bit gaming, Rex Rocket is a traditional 2D platformer that pays tribute to classic NES games like Mario, Mega Man, and Metroid. Old-school fans and platformer newcomers alike will find Rex Rocket an enjoyable and rewarding experience thanks to one-of-a-kind handmade pixel art that makes up over 100 handcrafted levels connected in an expansive starship – each filled with a wide variety of puzzles, enemies, hazards and bosses. An original chiptunes soundtrack by Saskrotch, captivating setting filled with quirky characters, and ability to choose the gender of your hero is only a handful of the many awesome features in the game.

Set in Earth’s distant future, Rex Rocket alludes to the classic conflict of Man vs. Machine. You play as either Captain Rexford or Rexanna, a former war hero who now transports scientists throughout the universe in the epic Star Ship – S.S. Montana. The game begins on Earth as the crew prepares for another routine mission for the Council of Science that involves transplanting bio-engineered Terra-Oozlings onto an uninhabited planet on the other side of the galaxy. While the ship’s crew are in cryo-sleep, all heck breaks loose when the dangerous specimens escape and cause the ship’s main AI computer to go insane.

-Classic 2D platforming with shooting, wall-jumping, and more – all combined with innovative gameplay twists like shooting your laser downward for a handy aerial boost with each jump!
-Amazingly detailed pixel art and animations make up hundreds of unique characters as well as over 100 hand-crafted levels that all connect within the expansive starship!
-Awesome retro sound effects coupled with an amazing chiptune soundtrack by Saskrotch!
-Choose the gender of your hero/heroine as you step into the boots of either Rexford or Rexanna ‘Rocket’ Rexington on this epic space adventure!
-Collect powerful weapons and useful upgrades by defeating bosses and solving clever platforming puzzles!
-Learn more on the backstory and details of characters, weapons, enemies, and more by collecting more than 100 Info Nodes throughout the ship!
-Get lost in an expansive starship as you explore the various routes that may offer a better path to your destination, lead you to a treasure trove of collectibles, or take you on a deadlier course!
-A captivating narrative with plenty of light-hearted humor and goofy characters to brighten your adventure!
-Prepare for a tough yet rewarding space adventure where you’ll face giant flame-throwing machines, swarms of Oozling-possessed crew members, and a berserk AI computer that never runs out of clever ways to try and kill you