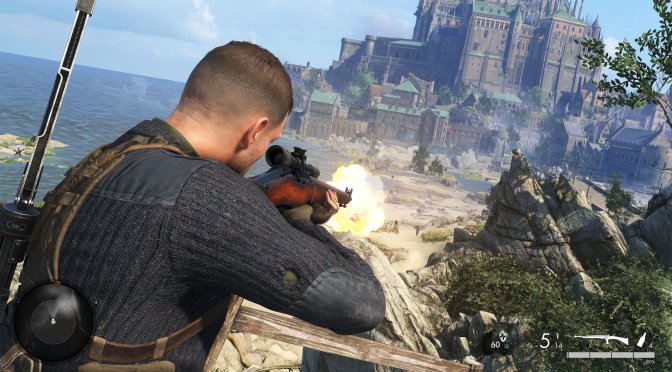 Rebellion has revealed that its award-winning Sniper Elite franchise will return in 2022 with the release of Sniper Elite 5. Sniper Elite 5 will see elite marksman Karl Fairburne travel to France in 1944 to destroy Operation Kraken.

To celebrate the announcement Rebellion has released the first trailer for the forthcoming game using all in-game engine footage.

As part of a covert US Rangers operation to weaken the Atlantikwall fortifications along the coast of Brittany, Karl makes contact with the French Resistance. Soon they uncover a secret Nazi project that threatens to end the war before the Allies can even invade Europe: Operation Kraken. It’s Karl’s mission to take out the high ranking Nazi officers and end Operation Kraken once and for all.

Based upon real-world locations from France in 1944, the new game maps are the largest and most immersive in the franchise’s history. The game’s new traversal system offers players an even greater sandbox of options when it comes to taking out their targets. Players can even invite a friend to help them on their mission with enhanced co-operative gameplay options.

Sniper Elite 5 continues the franchise’s unparalleled tactical sniping experience complete with incredible ballistics and an enhanced kill cam, taking the genre-defining feature to the next level. New customization options allow you to adjust your rifle, other weapons and ammo to suit the mission and your play style.

The game promises to feature an expansive campaign and advanced gunplay physics and traversal. Moreover, it will have high-caliber customization options. Not only that, but players can expect an Invasion mode drop-in PVP. Additionally, there will be an adversarial multiplayer, supporting up to 16 players. And lastly, the much-beloved kill cam will make a return.