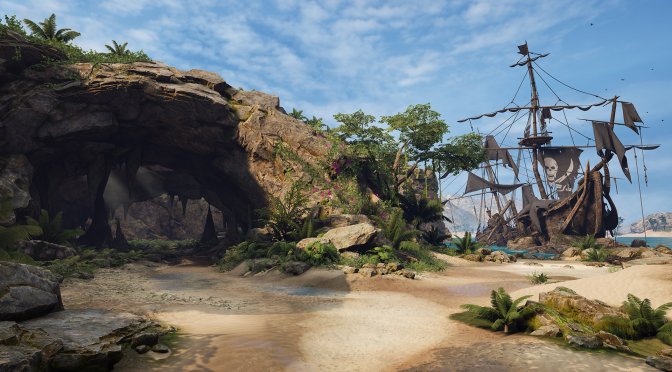 Polish game developer Split Light Studio recently dropped a new teaser trailer for its upcoming game Pirate VR: Jolly Roger, which you can view below. This appears to be a new virtual reality pirate game, and it looks pretty good.

Pirates VR Jolly Roger is a game alluding to old stories of the all-time most famous Pirates. Pirates VR is a linear gameplay in virtual reality set on a mysterious island somewhere in the Caribbean Sea. The objective of this fascinating adventure, full of astonishing moments and twists in the plot, is to a find the hidden treasure.

During the game the player will face multiple challenges, getting through a dense jungle, climbing high cliffs, crossing obscure cave corridors and sea depths. They will solve puzzles as well as face lurking dangers.

The game appears to have a Robinson Crusoe-style story, in which the player finds himself on an island in the Caribbean Sea. The developers said that Pirates VR: Jolly Roger is a linear game, which means you won’t be able to wander and freely explore throughout the whole island. Nonetheless, the trailer shows a wide range of environments that the player will encounter in this VR game, such as jungle scenes, dark caves, and a sunken ship.

The trailer clip appears to be scripted, but the graphics do look impressive, at least in my opinion. It remains to be seen whether the final game will also look good, or will sport even better graphics/visuals.

Here are the game’s key mechanics and features:

“In such extreme and diverse conditions, the hero will need a wide set of skills that they will acquire as the gameplay develops. At the beginning, they will learn how to move in the new space. Then, with the help of the parrot, they will recall how to climb steep rocks, use different objects and shoot. In such a diverse environment, the ability to slide down a rope or swim in the depths of the ocean could not be omitted.

The possibility to choose various game modes with different challenges will allow you to adjust the level of difficulty to the player’s abilities and skills.

What is more, the player will be able to control their health, fatigue and oxygen level while underwater. The diversity of the animal and plant life combined with the dangers awaiting for the player will be long remembered. Similarly to baffling changes in the weather, surroundings and shipwreck interior as well as pending surprises, making the game a fully absorbing adventure.”

There is currently no ETA on when this game will come out on STEAM.