Well, you all saw that coming, right? As we said a year ago, a number of PS3 and X360 games were actually running on PCs and not on those consoles. Hell, even Watch Dogs was running on a PC during Sony’s PS4 event. And here we are today with some images, showcasing PC setups running Xbox One games during this year’s E3. What a shock!

The following images were presented by CinemaBlend. As we can clearly see, at least one PC was present under Xbox One’s kiosk, and was running on Windows 7. That PC setup was equipped with an Nvidia card, something that surprised pretty much everyone. 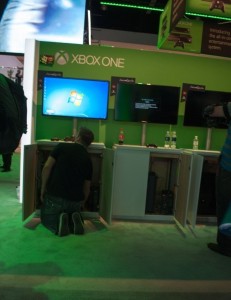 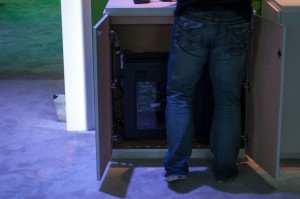 There are lots of rumors surrounding these images. Some suggest that Microsoft was using Nvidia’s cards due to its available stock while others say that MS deliberately setup those machines in order to run its games with a higher image quality and better framerates.

We should also note that some games (like Battlefield 4) were clearly being demoed on the PC, even during the live conferences of both MS and Sony and despite those companies statements about using a PC with ‘similar specs to those of the console.’

And then there is this tweet from Julian Rignall from US Gamers. As Julian claimed, one of the Xbox One games – using an Xbox One controller – crashed ‘to a Windows 7, Hewlet Packard-branded desktop.’

At this point, we should make it crystal clear that a dev kit is not running a Windows 7 OS, and does not use a graphics card from a different manufacturer, and not from the one whose GPU is powering its system. So in case you are wondering then no; this is not a dev kit.

Julian claimed that he will shed more light on this when the dust has settled, so we are really looking forward to what he has to say.