It’s been a while since our last look on Outerra, an indie engine that has a tremendous potential. This engine is in alpha phase and features a real scale planet Earth that can be explored and is created from real elevation data with resolution 90m where available, 1km resolution for oceans. The team behind it has been experimenting with procedural grass and decided to showcase their first results. And we are seriously impressed with them. Why you ask? But because you can go as far as your eyes can see. There are no invisible walls here and yes, you can go at that distant mountains. Truth be told, the terrain textures need a bit more work as they are really low-res but then again, Outerra is the only engine that features such open and detailed environments. Enjoy everyone!

According to the team, procedural grass in Outerra is rendered in two stages. The first stage generates just a grass canopy, a height mask that produces the overall shape that the grass forms on the terrain. It generates dry grass-less areas as well as grass of varying height using fractal patterns. Output of this stage is also directly used when rendering the terrain in the distance; what you see out there is not the ground level but a procedurally textured envelope of low vegetation. This also means that objects that are hidden in the 3D grass will be hidden under the distant canopy as well.

The second stage generates grass blades dynamically using the canopy data: terrain elevation, grass height and color. Canopy data have resolution roughly 30cm, and the amount of grass blades varies depending on the level of detail, that in turn depends on the distance from the camera.

Enjoy the following screenshots and videos from the latest alpha build of the Outerra Engine! 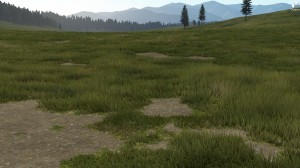 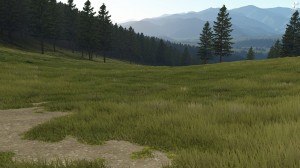