We know that Capcom has been supporting the PC platform this entire time. And in case you were unaware of, Devil May Cry 3 & 4 were really successful on the PC. Therefore, we were quite shocked when the latest DmC game was initially announced for only X360 and PS3. However, things might be a little different as the official FB page of the game indicates that the game will be coming to our beloved platform.

As of right now, the page’s info has not been edited and you can easily notice the PC platform, right next to the X360 and PS3. Capcom’s Sven responded to this and said that PS3/360 were the only confirmed platforms at this point. However, we’ve seen countless examples of Capcom ‘hiding’ the PC platform from their games. If you can recall a while ago, SFxT was initially announced for the PC but then Capcom stated that it was simply a typo back then. Fast forward a couple of months and here we are, waiting patiently for the PC version of this amazing mashup. So yeah, the new DmC might be coming to the PC after the release of the console versions.

Here is a screengrab from Devil May Cry’s FB page: 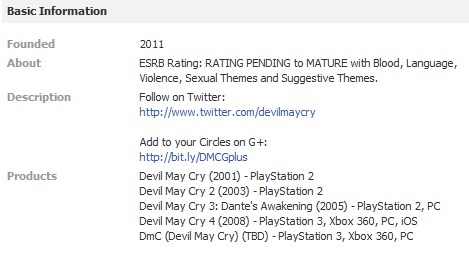