With the recent launch of the RTX 30 series Ampere cards, NVIDIA also announced a new suite of I/O features that they’re calling RTX IO, which is basically an I/O architecture. This is a new feature of Ampere GPUs that helps handle data from high-speed SSDs with the graphics card, thus taking the load off the CPU.

RTXIO leverages Microsoft’s DirectStorage API and promises to provide a significant leap in performance by decompressing and loading assets directly off of the GPU, thus eliminating CPU bottlenecks, and major decrease in processor utilization (up to 20x).

At a higher level this feature appears to be NVIDIA’s implementation of Microsoft’s forthcoming DirectStorage API, which like on the Xbox Series X console, will allow for direct, asynchronous asset streaming from storage directly to the GPU. The I/O latency and the throughput can be improved via DirectStorage/RTXIO, by bypassing the CPU for this work. This will directly fetch the resources the GPU needs. More importantly, Ampere GPUs are now capable of directly decompressing game assets.

Decompressing those game assets to something the GPU can use, and offloading it from the CPU not only frees it up for other tasks, but also helps improve the asset streaming performance and game load times. We already know this technology is coming to the Xbox Series X and PlayStation 5, so this is just Microsoft and NVIDIA trying to keep parity with the next-generation of consoles. This technology delivers GPU-based lossless decompression and low-level, super-efficient APIs architected specifically for game workloads.

“Object pop-in and stutter can be reduced, and high-quality textures can be streamed at incredible rates, so even if you’re speeding through a world, everything runs and looks great,” the company explained. “In addition, with lossless compression, game download and install sizes can be reduced, allowing gamers to store more games on their SSD while also improving their performance.”

“Microsoft is delighted to partner with NVIDIA to bring the benefits of next generation I/O to Windows gamers,” wrote Bryan Langley, Group Program Manager for Windows Graphics and Gaming.

“DirectStorage for Windows will let games leverage NVIDIA’s cutting-edge RTX IO and provide game developers with a highly efficient and standard way to get the best possible performance from the GPU and I/O system. With DirectStorage, game sizes are minimized, load times reduced, and virtual worlds are free to become more expansive and detailed, with smooth & seamless streaming.”

To be precise, NVIDIA RTX IO brings GPU-based lossless decompression, allowing reads through DirectStorage to remain compressed while being delivered to the GPU for decompression. This removes the load off the CPU, moving the data from storage to the GPU in its more efficient, compressed form, and improving I/O performance by a factor of 2. By using DirectStorage, next gen games will be able to take full advantage of RTX IO-enabled hardware to accelerate load times and deliver larger open worlds, all while reducing the CPU load. 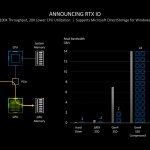 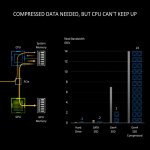 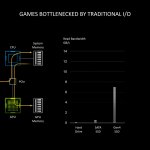