Many were hoping to purchase these cards, but the custom RTX 3080 stocks were sold out immediately within few minutes at several retailers across the US, UK and Europe. Some Major e-tailers also experienced extremely high wave of traffic, and this brought their entire website down as well.

Even NVIDIA’s official store had an issue where people couldn’t finish their purchase, after adding the item to the shopping cart. Many customers claim that the listings disappeared in 15 seconds, and cards sold out before the Add to Cart button even worked for them. The stock immediately depleted, almost as if there was no stock at all to begin with. NVIDIA also issued an official statement regarding the custom RTX 3080 GPU’s stock availability at launch day.

Now we have some information on the Founders Edition RTX 30-series Ampere cards. An NVIDIA employee has provided us with an update on the official forums, stating that the sale of Founders Edition GPUs will be initially limited to select partners, and the company is looking to improve the online buying experience. This move appears to be new since the Founders Edition/FE SKUs were previously only exclusive to Nvidia’s own web store.

“We have heard your feedback regarding the NVIDIA online store and are working to improve the experience.

Founders Edition units are limited, and more will be available in the coming weeks alongside an increasing supply of boards from our global board partners.”

But do note that this only applies to the Founders Edition/FE Ampere GPUs, and not custom AIB cards from other board partners.  Custom GPUs are going to be offered as usual through other retail channels. As I mentioned before, the Founders Edition/FE SKUs were exclusive to Nvidia’s own online store, but now Nvidia will allow other partners to sell these cards as well. 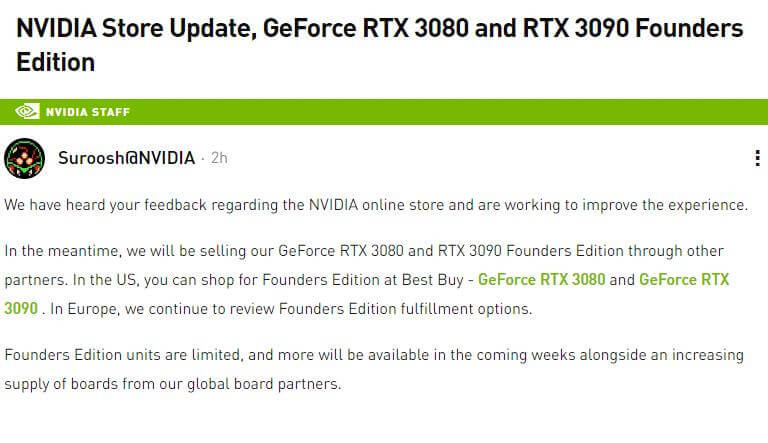 According to Suroosh@NVIDIA, BestBuy will now initially take orders for the GeForce RTX 3080 and 3090 Founders Edition GPUs in the United States/US. For EUROPE the company will continue to review Founders Edition fulfillment options, so right now we don’t know how European and customers from other countries are going to get these cards.

The company also claims that Founders Edition SKUs are limited, but more stock is going to be available in the coming weeks. Speaking of custom AIB GPUs, CEO Jensen Huang recently said that the current stock issue has more to do with the demand rather than supply, and emphasized demand as the most major factor.

It seems this year it has been hard to purchase a new NVIDIA Ampere-based flagship graphics card. Meanwhile, some manufacturers/AIBs have also been providing daily updates on social media outlets and forums, apologizing for the delay in availability of these custom Ampere cards.

This GeForce RTX 30-series launch has seen an excessive demand, with several retailers fighting over each shipment to fulfill their pre-orders. What’s even worse is that a lot of the RTX 3080 custom graphics cards didn’t even ship to gamers, because scalpers purchased these graphics card in bulk to sell them for profit elsewhere. Scalpers were demanding anywhere from $1000 to $2000+ USD for these cards on EBay.

The company has promised to implement more security measures to combat people buying cards using bots, and they also plan to implement CAPTCHA on its online store. This whole Ampere GPU launch has been a mess, with gamers and customers criticizing Nvidia for poorly managing the situation.

The company has already cancelled several orders which were placed using scalper BOTS. This is definitely one of the most broken launch events ever witnessed for a flagship graphics card which indeed had a huge demand, but unfortunately, this has created much unrest in the gaming community.