Rocket Lake-S will be housed on the new 500-series motherboards. Although the Rocket Lake-S lineup will be the last to feature the LGA1200 socket/Z490 chipset, Intel is planning a full range of chipsets, including workstation W580, high-end gaming Z590, H570, and budget-oriented B560 and H510 series.

Intel has also broadened the DMI interface, which connects the processor to the platform controller hub (PCH), from x4 to x8. Rocket Lake 11th Gen core series CPUs are expected to hit retail shelves by the end of March 2021.

The RKL lineup will share the same LGA 1200 socket and motherboard compatibility as the current 10th Gen Comet Lake processors, thus providing an upgrade path even for those rocking the current flagship Core i9-10900K Comet lake CPU. Intel’s partners are all set to unveil their 500-series motherboards which would include the Z590, H570, B560, & H510 families.

According to one recent finding spotted on ASRock motherboard’s support page, Intel plans to enable memory overclocking ability on the non-Z chipset Motherboards as well. For the current 11th gen Rocket Lake- S CPU lineup, motherboards that support the H570 or B560 chipset will allow users to use memory that’s faster than the official supported specification.

But this might change now it seems, if ASRock’s support page is cited as an example/proof.

As recently spotted by @momomo_us, it looks that ASRock’s Z590 Taichi product page sort of confirms that Intel may employ a similar tactic with the Rocket Lake-S CPU lineup. The support page description for the memory reads, “11th Gen Intel Core™ (i9/i7/i5) support DDR4 up to 3200; Core (i3), Pentium and Celeron support DDR4 up to 2666.”

For comparison, in the previous 10th generation Comet Lake-S CPU lineup, the Core i9 and Core i7 SKUs had native support for DDR4-2933, while the Core i5 and below SKUs were limited to DDR4-2666 frequency. So basically the H470 and B460 chipsets were restricted to DDR4-2933 memory support only.

Now, if we look back on ASRock’s Z590 Taichi product page it’s clear that the core i9 to Core i5 models are Rocket Lake-S chips supporting DDR4-3200, and the rest of the SKUs  are the Comet Lake refresh chips that will have same support for DDR4-2666 speed.

This might not seem like a big deal to some of you, but it’s good to know that the chipmaker is opening the door for these budget chipsets as well, thus providing gamers with an option to overclock the memory, or use a higher clocked system RAM in the first place. But of course, this is just one AIB for now, ASRock, but other vendors may also follow suit.

There is one concern though regarding supporting memory overclocking on the B/H-series boards, is that since the memory controller is in the CPU, the chipset plays no real role in memory support capability besides acting as a fully arbitrary (un)lock.

So basically now the H570 and B560 chipsets will support memory overclocking, which means memory speeds above DDR4-3200, but you still need to pair the motherboard with a compatible Core i5 and above processor SKU. Core i3 and below processor SKUs will stick to DDR4-2666 speed.

However, please keep in mind that for any frequencies above 2666 MHz, you’ll have to use at least a Core i5 processor. After all, the Core i3 and Celeron SKUs are not going to support speeds higher than 2666 MHz.

Previously, pairing a high-end core i9 chip on an H-or B-series chipset meant you were restricted and locked out from using a faster memory. Hopefully, now things might change with the new Rocket Lake processor series lineup. But the H570 and B560 chipsets still lack the support for CPU overclocking.

Intel claims that Rocket Lake’s IPC and frequency improvements offset the removal of the two cores, implying the chip will offer the same performance as the previous gen ten-core 10900K CPU.

Rocket Lake-S desktop platform is the last CPU architecture to be based on an advanced and refined 14nm process node. Intel has confirmed that the 11th gen Core series features 20 PCIe 4.0 lanes off the CPU, which are 4 lanes more than the current 10th gen Comet Lake-S lineup.

“Backporting” is a technique that allows Intel to take a new design built on a smaller process node, in this case 10nm, and put it on an older, larger node like 14nm. Also, the RKL CPU lineup will max out at 8 cores/16 threads. According to Intel, Rocket Lake-S will have a PL1 state value of 125 Watts and a PL2 of 250 Watts. 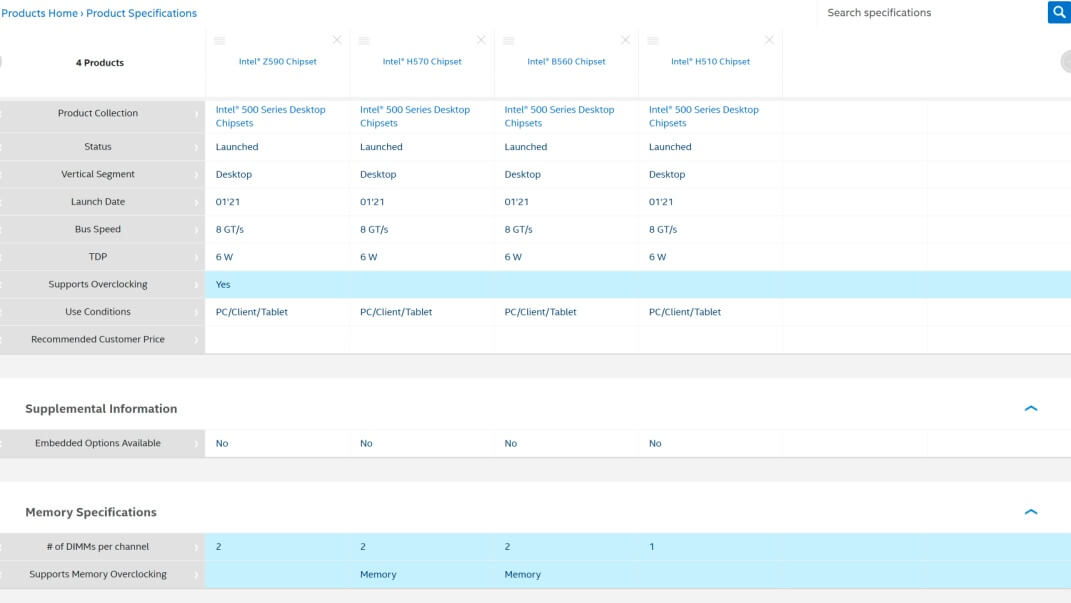