Back in October, Intel officially revealed its upcoming 11th Gen Rocket Lake-S desktop CPU lineup, based on the Cypress Cove core architecture. Rocket Lake (RKL) is a planned microarchitecture designed by Intel as a direct successor to the Comet Lake-S series of desktop CPUs and high-performance mobile devices.

RKL processor family will release between the first and second quarter of 2021, and is expected to share the same socket and motherboard compatibility as the current 10th Gen Comet Lake processors, thus providing an upgrade path even for those rocking the flagship Core i9-10900K Comet lake CPU.

Rocket Lake-S desktop platform should be the last CPU architecture to be based on an advanced 14nm process node. The new Rocket Lake-S silicon or SoC is going to be known as ‘Cypress Cove’.

Rocket Lake-S will be the first CPU lineup to offer PCIe Gen 4.0 support, along with enhanced overclocking and double-digit percentage IPC benefits over the current Comet Lake-S lineup. Rocket Lake will use a 14nm back-port of the 10nm Sunny Cove cores found in the Ice Lake processors. With Rocket Lake processors, Intel is targeting a raw instruction-per-clock uplift in the double digit range.

A recent leaked roadmap coming via Twitter user @OneRaichu seemingly confirms that Intel will start mass production of these new Chips in January next year, with RTS (Ready To Ship) retail date expected to be around 12th to 15th week of 2021. So according to this leaked roadmap we can guess March as the minimum baseline launch window, though it might happen sooner as well.

This is the full leaked roadmap:

This roadmap appears to be Legit, but you should still exercise caution when it comes to any leak, unless there is some official confirmation from the company. Intel can also relax or change any planned roadmap as well, depending on several other factors like demand/supply, die yield issues, and competition from rivals, among other market conditions.

Rocket Lake-S/RKL engineering samples were already in production since June 2020. There have been several leaks on RKL qualification samples recently, with the Core i9-11900K, Core i9-11900 & Core i7-11700 SKUs spotted over at the Chiphell Forums (coming via Harukaze5719). These samples were sent to testers for qualification and hardware evaluation.

All three chips are part of the 11th Gen family and feature 8 cores, 16 threads. Since these chips are early engineering samples, they feature much lower clock speeds than the final retail counterparts. 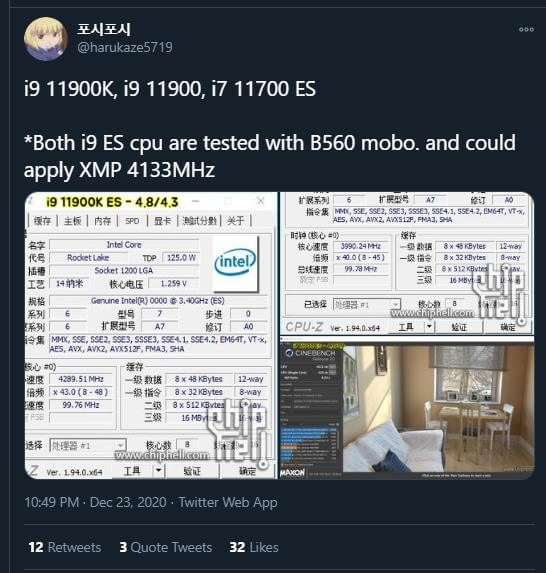 According to a recent blog post by John Bonini, Intel’s VP and GM of Client Computing Group Desktop, Workstations and Gaming, RKL chips will be launched in the first quarter of 2021. No specs have been detailed yet, but the blog does confirm that Rocket Lake CPUs will support PCIe 4.0 and that Intel will continue to target “gamers” for desktop CPUs.

“Our 10th Gen Intel Core processors continue to provide excellent performance and a stable platform for even the most demanding games. Ultimately, I believe there’s a great 10th Gen option that addresses the needs for every type of gamer — from casual players, to the most dedicated and passionate enthusiasts.

Though as you’d expect, we’re constantly looking ahead at what’s next and how we can make our desktop CPUs even better. With that said, I’m also happy to confirm that the next generation 11th Gen Intel Core desktop processors (codenamed “Rocket Lake”) is coming in the first quarter of 2021 and will provide support for PCIe 4.0. It’ll be another fantastic processor for gaming, and we’re excited to disclose more details in the near future. There’s a lot more to come, so stay tuned!”

Some CPU-Z and Cinebench results of an engineering RKL CPU sample were recently leaked online. More info and details can be found here.

It appears that one of the board partners MSI has just spilled the beans on the exact Launch date window of these CPUs. This was posted on MSI’s official account on South Korean Danawa forums, in a recent product Q&A session, as spotted by @harukaze5719. 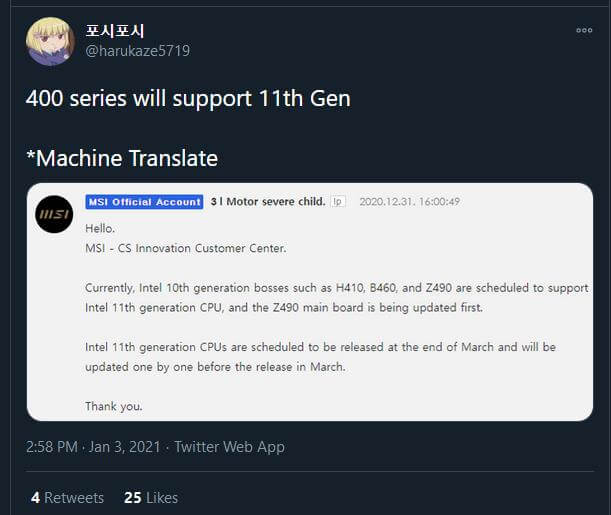 The company has confirmed that the launch of the Rocket Lake 11th Gen series is now expected at the end of March. The post also confirms that MSI 400-series Motherboards are going to support the 11th Gen Rocket Lake-S processors.

The Z490 chipset will be the first to get a BIOS/firmware update to offer full compatibility, with H410 and B460 boards to follow suit.