It seems that this week’s “SimCity” story will be dedicated to Bioshock: Infinite. In an awkward turn of events, 2K Games allowed IGN to break its review embargo for Irrational Games’ upcoming title and post a ‘in-progress’ review of it. Naturally, this exclusivity frustrated a lot of video-game journalists. In those frustrated journalists we can even find Geoff Keighley and Polygon’s Arthur Gies.

Spotted by NeoGAF’s member “unbias” the following tweet feeds show some really annoyed journalists. As most of you already know, this ‘exclusivity’ thing needs to stop, however we can’t see that happening anytime soon. It’s just how the industry works, and let’s not forget that other publications were also allowed to break embargoes for some other titles.

In case you are not familiar with embargoes, each and every game has an embargo when it comes to news, screenshots, videos, previews and reviews. Gaming websites are not allowed to break them, as they will be blacklisted from the publishers, thus they have to wait until the embargo gets lifted in order to publish their articles.

Review embargoes are introduced in order to give a reviewer the appropriate time to play, finish and write his or her review about the X game. Therefore, it really puzzled a lot of people this exclusivity deal with IGN. In our opinion, on-going video reviews are the best way to review a game, however a lot of publications rely on the old-school article type of reviews. But that’s another topic.

Naturally, we’ll have a Performance Analysis for Bioshock: Infinite, however we don’t know when it will go live. Until then, though, enjoy the drama below! 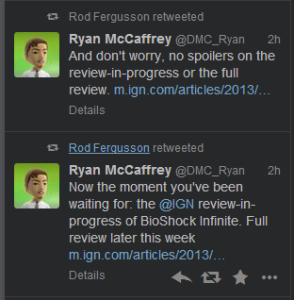 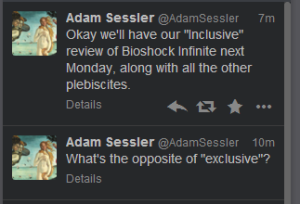