Horizon Zero Dawn came out on the PC four days ago and according to Steamspy, it has sold between 200K-500K units. Moreover, Playtracker states that 35% of its owners on Steam have already played the game on PS4/PS4 Pro. 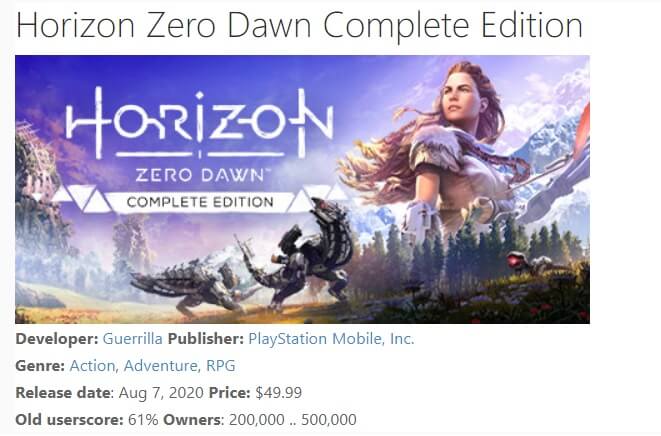 According to those that have access to specific Steamspy data, the game may have sold closer to 500K (426k to be exact). However, and as we’ve already said, Steamspy does not offer 100% accurate results. As such, it makes more sense to consider the lower value of its estimated results. Additionally, and if it did sell 426K, it will soon be listed as a game that has 500K-1 million sales).

35% of Horizon Zero Dawn owners on @Steam already played the game on @PlayStation.

This is a significantly higher "double dip" rate than usual even for delayed PC releases, rivaled only by Grand Theft Auto V. pic.twitter.com/1xQx5AlNDn

PlayTracker’s stats are also interesting. It appears that the “double dippers” for Horizon Zero Dawn are higher than usual. In fact, only Grand Theft Auto 5 is able to rival the game’s double dip percentage. So, in a sense, Horizon Zero Dawn failed to attract a lot of PC-only gamers.

Now let’s not forget the state at which Horizon Zero Dawn released. The game currently has a lot of issues; from 30fps animations and the inability to use Anisotropic Filtering to the lack of the snow deformation effects and Aloy’s hair bug. Guerrila Games is looking into addressing some of them, however, the game should had never released in that state. I’m also certain that the word of mouth (and Steam’s reviews) prevented a lot of gamers from purchasing it. Sony dropped the ball on this one and its sales numbers are a direct result of the questionable PC port.

Some users have also reported framepacing and stuttering issues, as well as crashes. If you have a lot of stutters, you may want to give Special K Mod a go.

Lastly, you can also read our PC Performance Analysis for Horizon Zero Dawn!