Horizon Zero Dawn is one of the first-party PS4 games that Sony decided to bring on the PC. Powered by the Decima Engine, the game uses the DirectX 12 API and comes with a number of AMD PC features. As such, it’s time now to benchmark it and see how it performs on the PC platform. 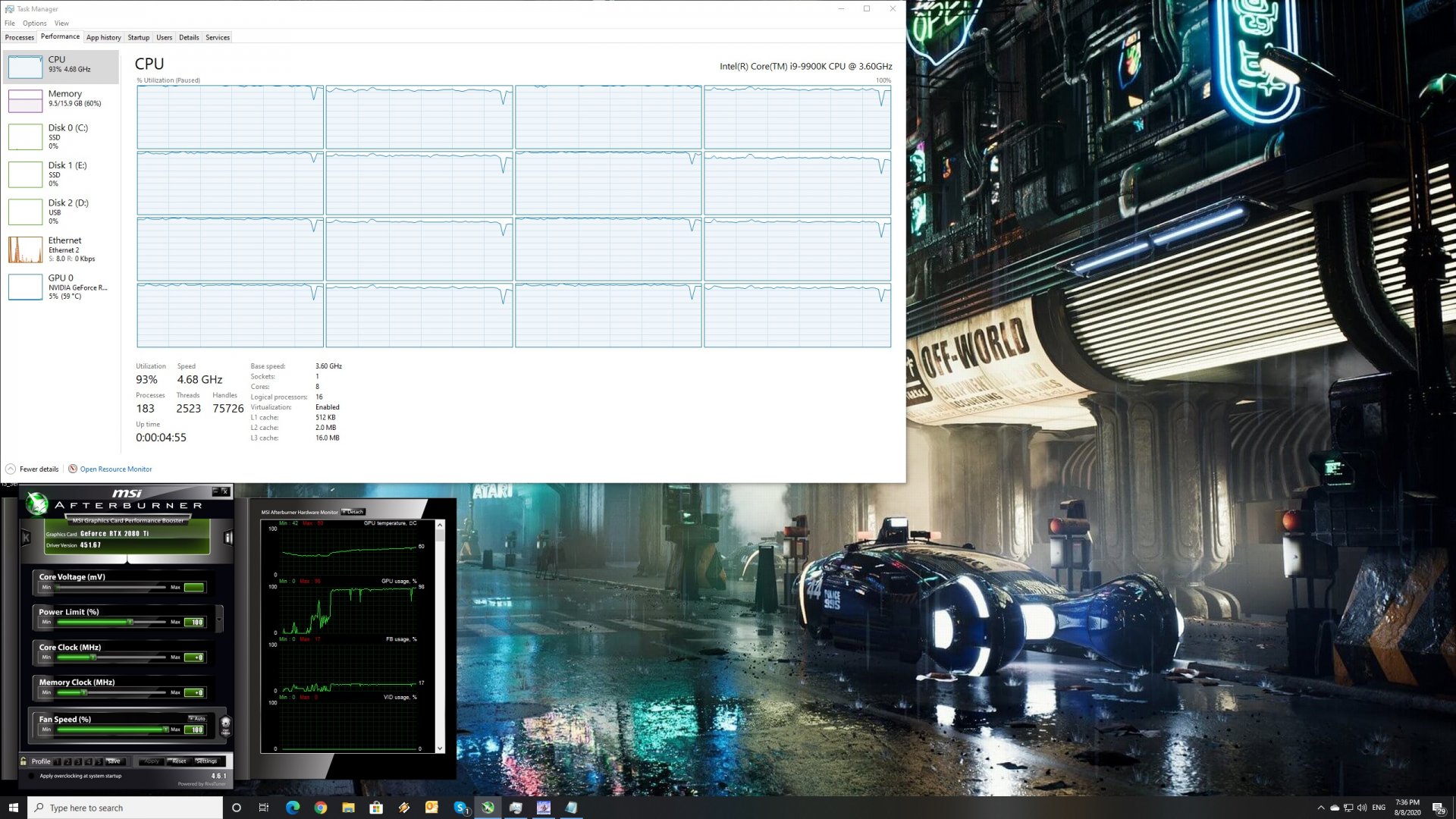 The team responsible for the PC port of Horizon Zero Dawn was Virtuos (who worked closely with Guerrilla Games). As we can see below, the teams have added a respectable amount of graphics settings. PC gamers can adjust the quality of Textures, Models, Anisotropic Filtering, Shadows, Reflections, Clouds and Ambient Occlusion. There are also options for Motion Blur and Anti-aliasing, as well as a FOV slider, Render Scaler and FPS limiter.

Now before continuing, do note that the game’s Original/Medium settings are similar to those of the PS4 version. In other words, these are the High settings we usually find in other multi-platform triple-A games. Also, the in-game Anisotropic Filtering setting is not working so we suggest forcing it via your AMD/NVIDIA Control Panel. Furthermore, CPU usage/utilization hits 100% during the initial Shader Compilation, therefore you may experience some crashes if you have an unstable CPU overclock.

While the game comes with a built-in benchmark, we’ve decided to benchmark the following in-game scene. This scene is one of the most demanding areas we could find in the first two hours, and we always prefer testing the most demanding scenes in our benchmarks. We also lowered our settings to Original/PS4 (and our resolution to 800×600) in order to avoid any possible GPU bottleneck. 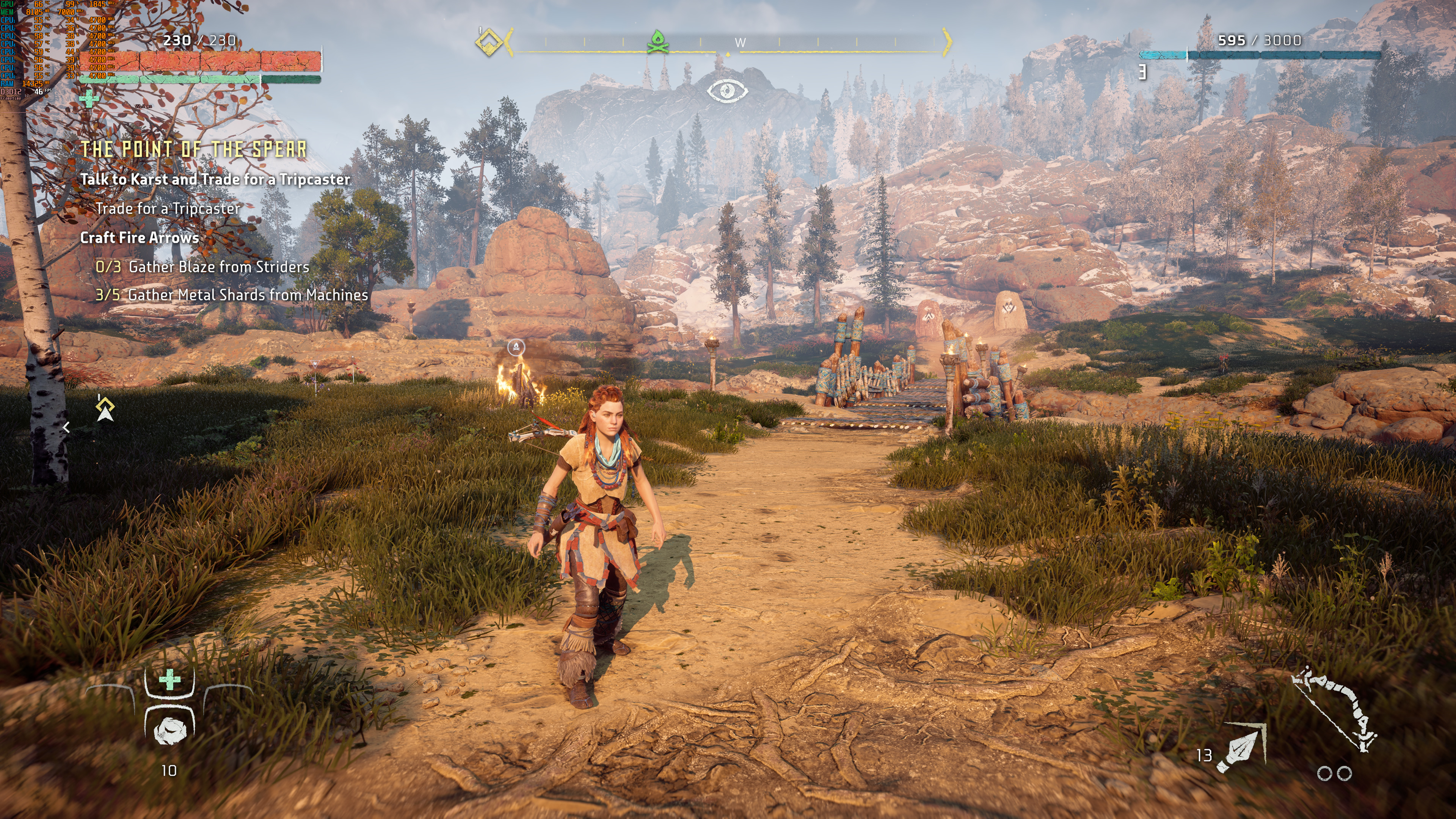 In order to find out how the game scales on multiple CPU threads, we simulated a dual-core, a quad-core and a hexa-core CPU. As said, Horizon Zero Dawn uses DX12 and as we can see, it can scale on all 16 threads of our Intel i9 9900K. Furthermore, and to my surprise, the game was actually playable on a dual-core system. Without Hyper Threading, our simulated dual-core system pushed a minimum of 27fps and an average of 38fps. Not only that, but we did not experience any major stutters. When we enabled Hyper Threading, our minimum and average framerates increased to 45fps and 53fps, respectively. 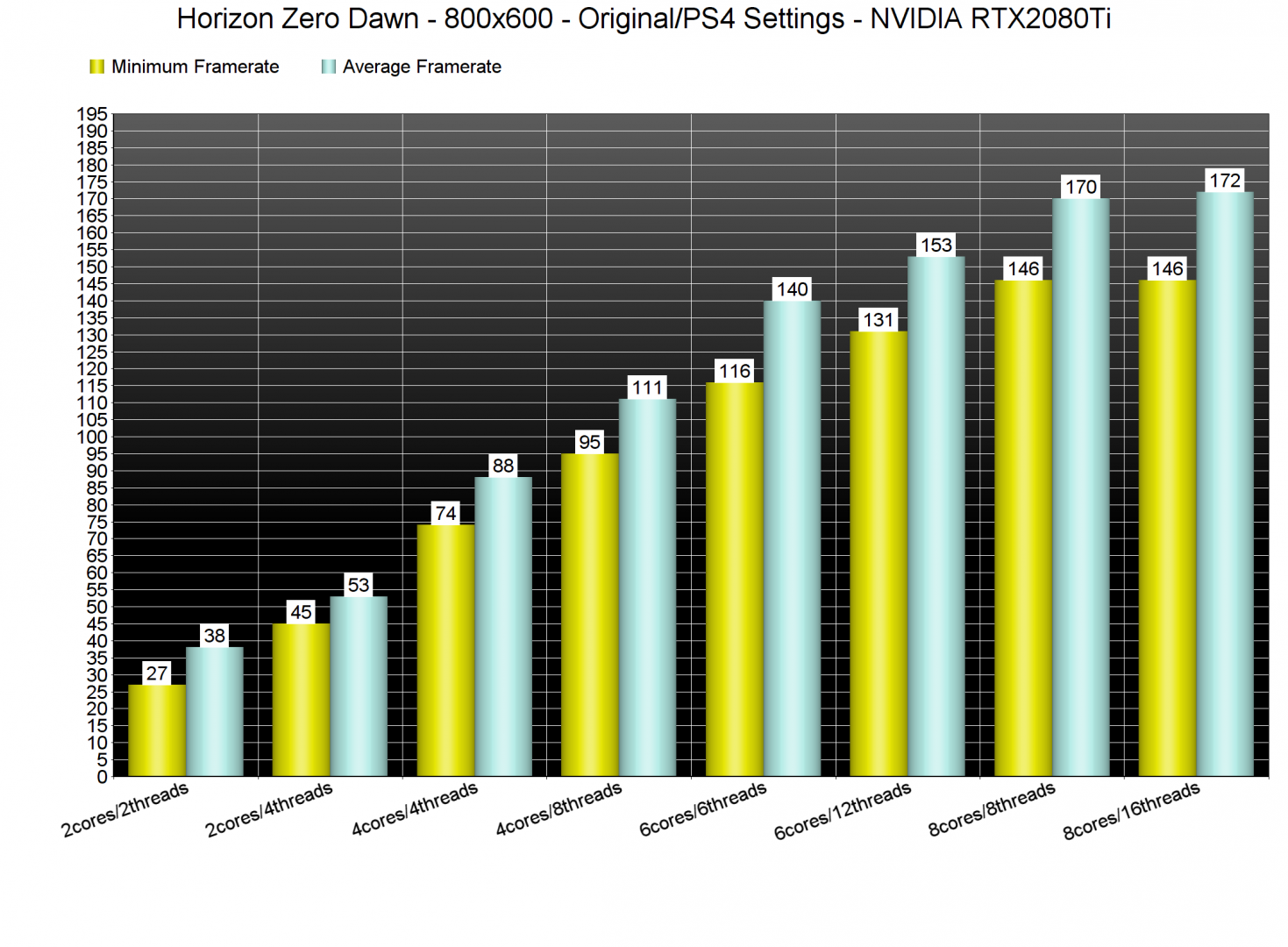 What’s also interesting here is that the game performs smoothly on older-generation CPUs. Our Intel i7 4930K had no trouble at all running the game with 60fps at 1080p/Ultimate settings. Yes, this particular CPU was holding back the RTX2080Ti at 1080p. However, we could still get a constant 60fps experience. Needless to say that at 1440p and 4K we were limited mostly by our GPU and not by our older-gen Intel CPU. 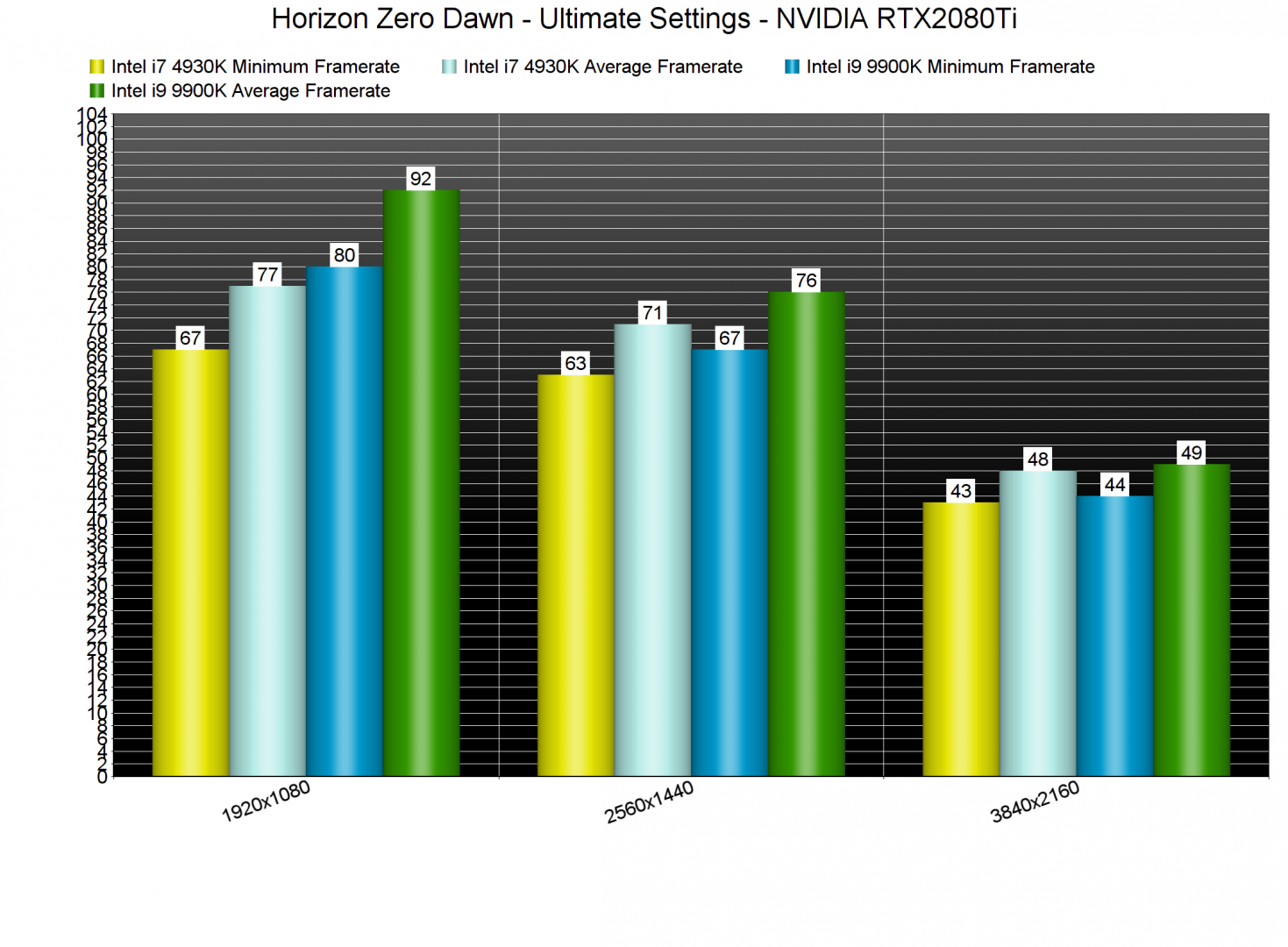 Now while Horizon Zero Dawn can run comfortably on a wide range of CPUs, it does require a powerful GPU. The only graphics card that was able to run the game with 60fps at 1080p/Ultimate settings was the RTX2080Ti. Additionally, the AMD Radeon RX Vega 64 performs horribly in this particular game. While the AMD Radeon RX580 performs great, the Vega 64 was slightly faster than the NVIDIA GTX980Ti. We really don’t know what the hell is going on here as Vega 64 should  be significantly faster than both the RX580 and the GTX980Ti. 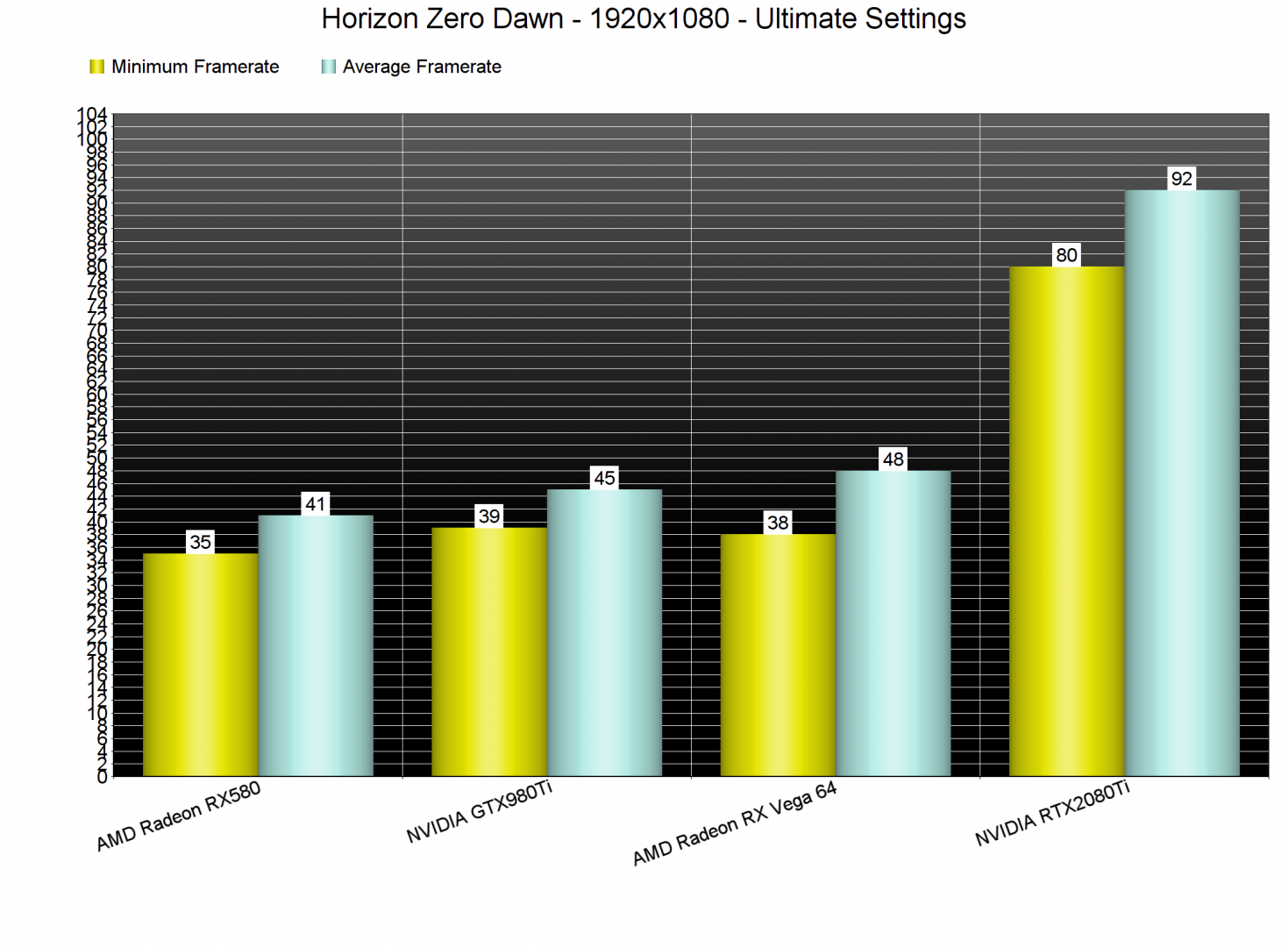 Now while the RTX2080Ti was the only GPU that could offer a constant 60fps experience at 1080p/Ultimate, we also benchmarked the game at 1080p/Original settings. And, thankfully, both the GTX980Ti and the Vega 64 were able to offer a smooth experience. Both of these GPUs had some drops to 54fps, however the game felt smooth for the most part. 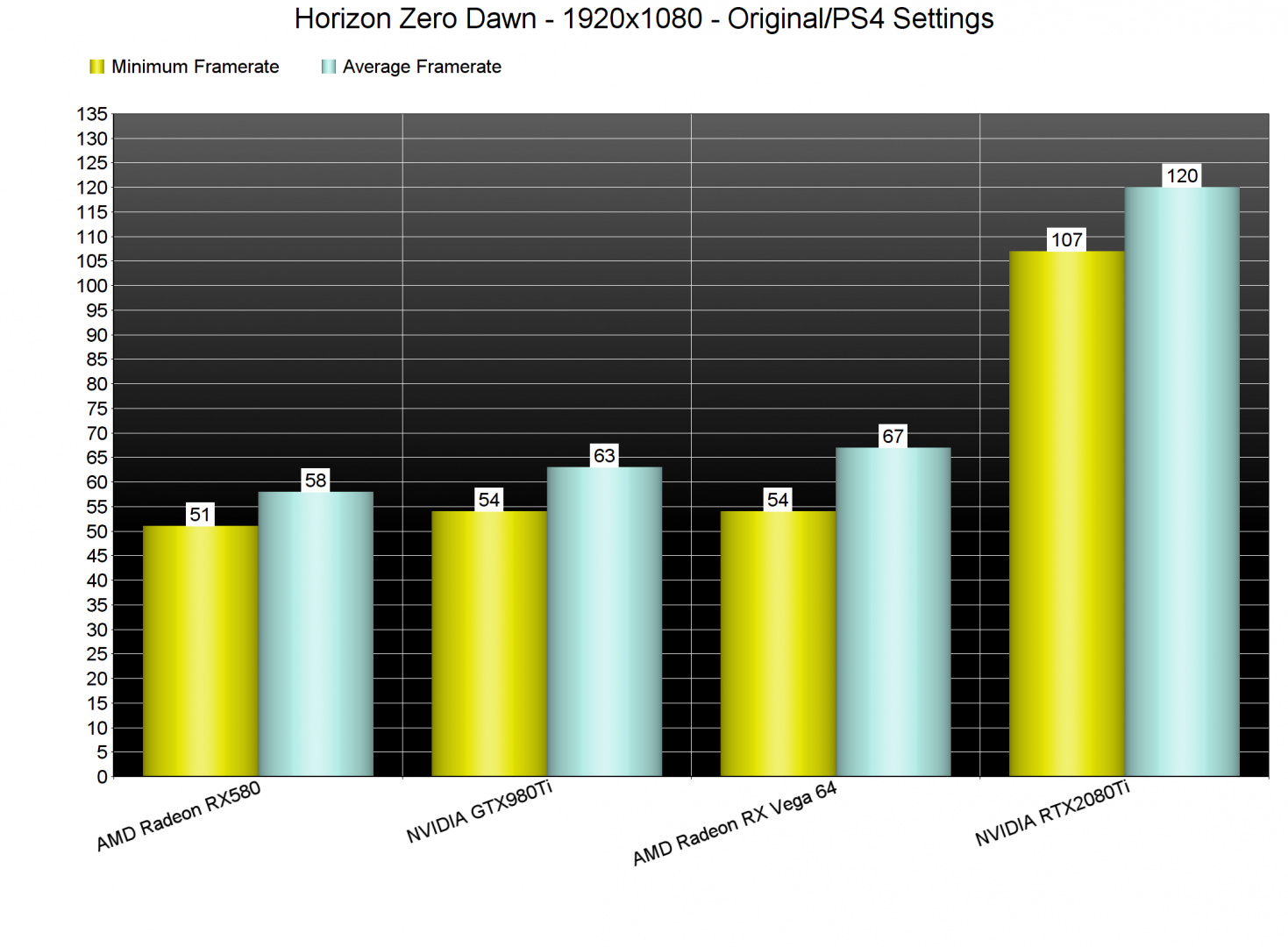 Similarly to our 1080p/Ultimate benchmarks, our 1440p/Ultimate tests show the RTX2080Ti pushing a constant 67fps experience. As for 4K, NVIDIA’s most powerful GPU was able to push a minimum of 44fps and an average of 49fps. 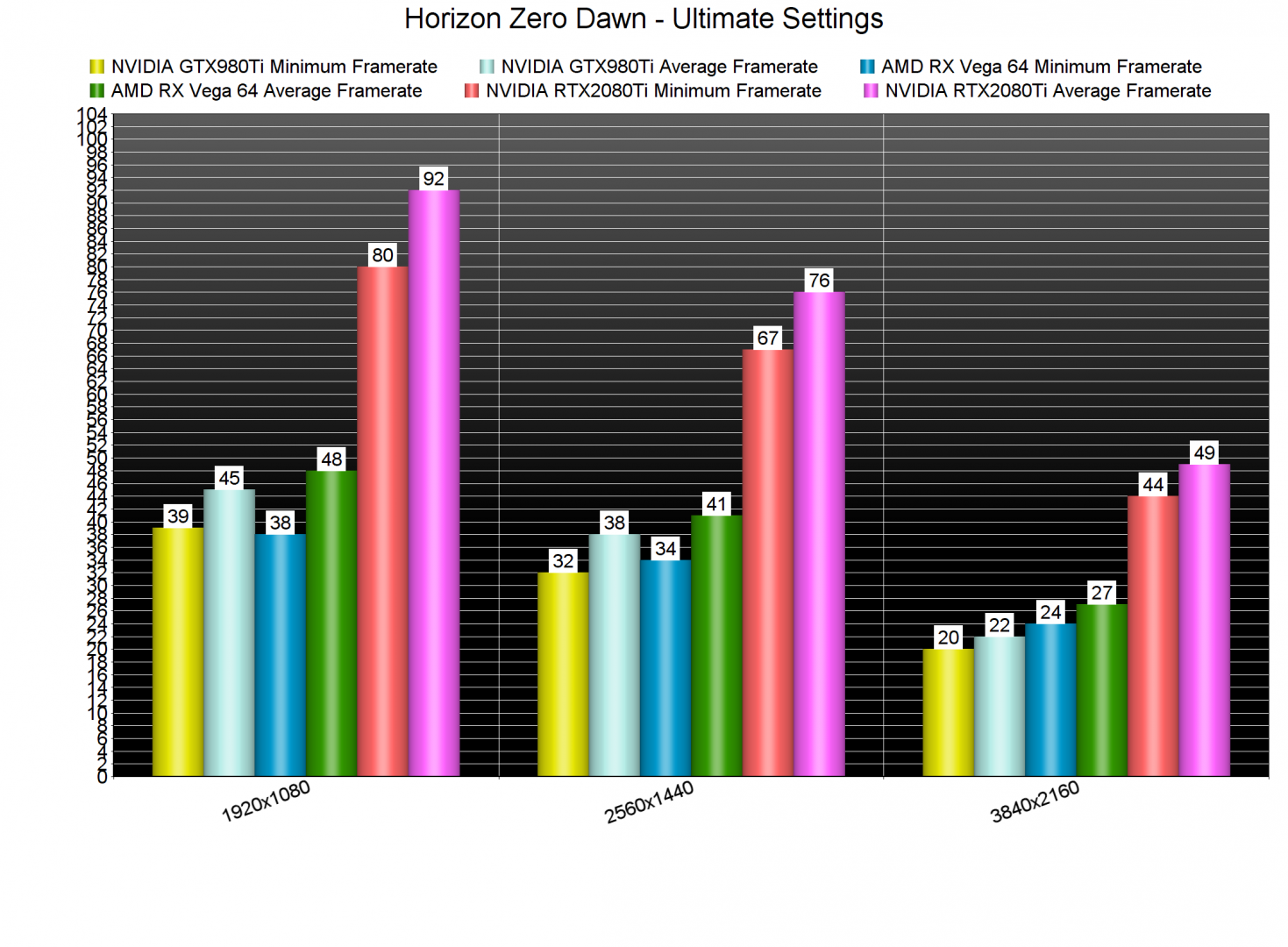 In order to get a constant 65fps experience at a custom 4K resolution (3328×1872), we used the following graphics settings. By using these settings, our framerate was higher than 65fps at all times. Furthermore, the graphical difference between these settings and the game’s default Ultimate settings is minimal. Thus, we suggest using them in order to hit higher framerates at 4K resolutions. 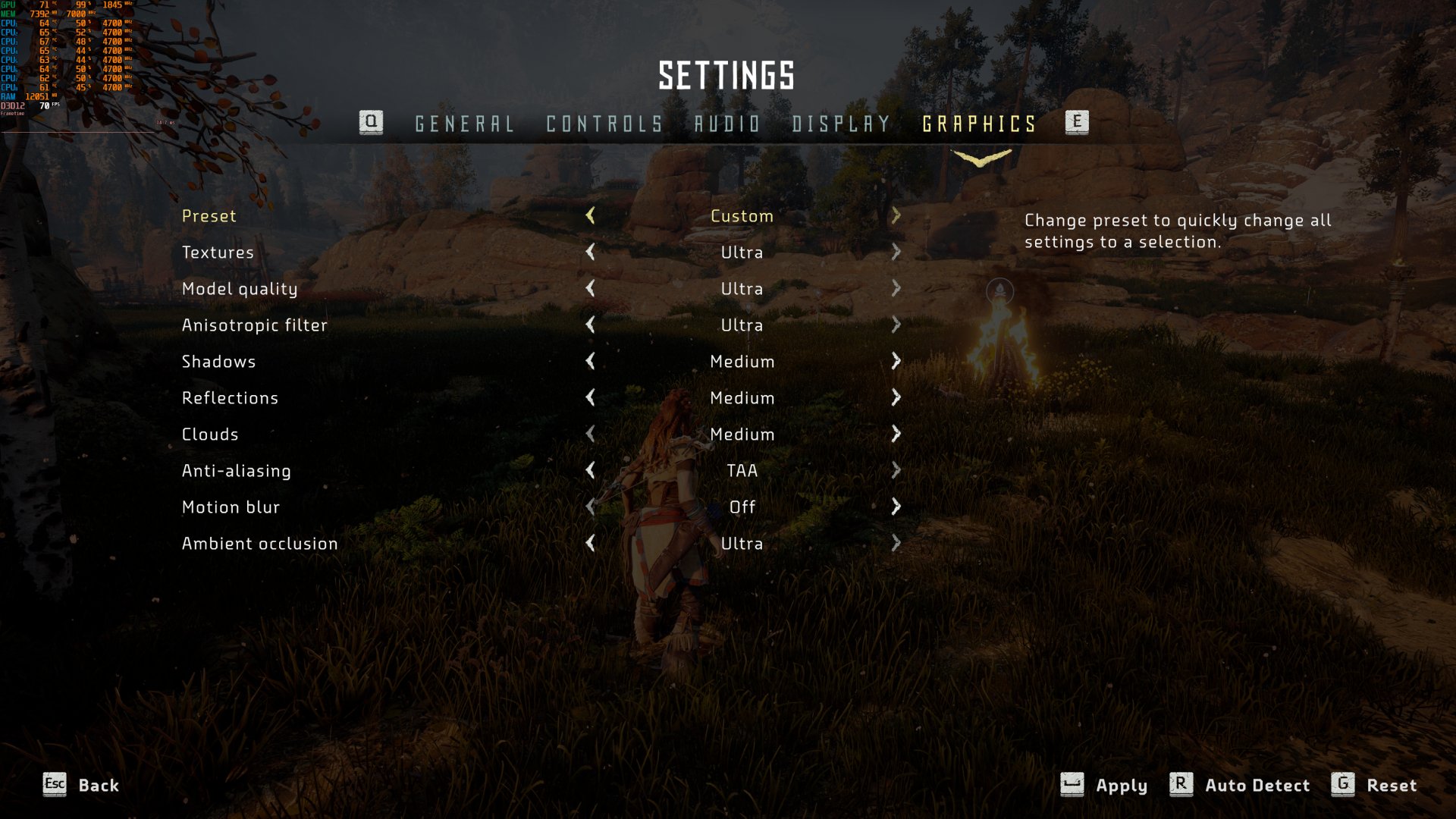 Graphics-wise, Horizon Zero Dawn looks great. This is easily one of the most beautiful open-world games to date, and looks better than other open-world games like Assassin’s Creed Odyssey. Guerrilla and Virtuos have used a lot of high-resolution textures in the PC version, and players can now interact with all foliage/grass. Still, the game suffers from some ridiculous 30fps animations, as well as some stutters when a UI element updates for a quest.

Before closing, we’d like to mention the good mouse and keyboard implementation. The game does not suffer from any mouse acceleration or smoothing issues. The game also displays proper K&M on-screen prompts. Aiming and firing Aloy’s bow with the mouse feels great, and you can now kill the enemy robots with ease.

All in all, Horizon Zero Dawn can run fine on specific PC configurations. However, the game does appear to have some optimization issues on older GPUs. And, in our opinion, that’s the biggest problem with Horizon Zero Dawn; its GPU scalability. While the game runs fine on the RTX2080Ti, it performs horribly on the Vega 64. Performance on the GTX980Ti is not that great too, as it’s slightly faster than the RX580. Theoretically, both of these GPUs should be noticeably faster than the RX580. This could be due to the fact that Horizon Zero Dawn uses, extensively, Asynchronous Compute. So yeah, there is definitely room for improvement here, no doubt about that. After all, this isn’t a perfect PC port or one of the most optimized PC games of 2020. However, it’s also nowhere close to being described as one of the worst PC ports/games of recent years. 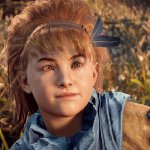 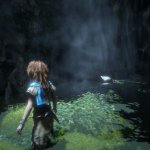 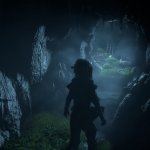 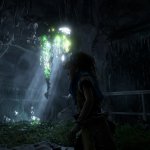 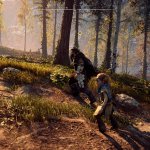 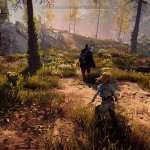 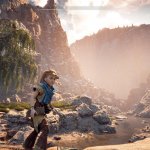 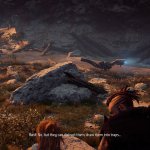 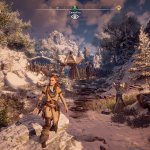 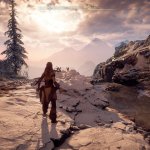 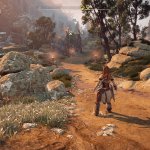 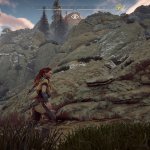 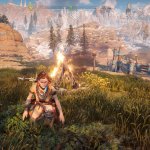 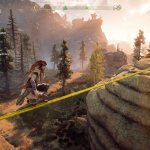