Rocket Lake lineup features the core i9, i7 & i5 variants, while the Comet Lake refresh desktop CPUs will come in Core i3, Pentium & Celeron variants.

But as I mentioned before, German retailer Mindfactory has been selling these 11th gen core processors even before the official embargo date. Almost 1 month ahead of launch. It now appears that AnandTech has also managed to grab one of these retail processors for their testing and review.

The retail Core i7-11700K sample obtained by AnandTech for review appears to be the first comprehensively tested Rocket Lake CPU, even before its official announcement and release.

But before continuing you should read this notice posted by AnandTech, because reviewers are still under NDA.

These are the full specs of this processor. 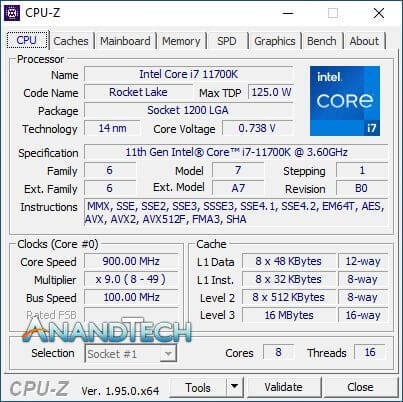 The Intel Core i7-11700K is a desktop processor with 8 cores, using the Rocket Lake-S architecture based on the socket LGA 1200. But thanks to Intel hyper-threading the core-count is effectively doubled, to 16 threads. Core i7-11700K has 16MB of L3 cache and operates at 3.6 GHz by default, but can boost up to 5 GHz, depending on the workload. Intel is building the Core i7-11700K on a 14 nm production process.

With a TDP of 125 W, the Core i7-11700K consumes a lot of power, so good cooling is definitely needed. Intel’s processor supports DDR4 memory with a dual-channel interface. The highest officially supported memory speed is 3200 MHz, but with overclocking (and the right memory modules) you can go even higher.

For communication with other components in the computer, Core i7-11700K uses a PCI-Express Gen 4 connection. This processor features the UHD Graphics 750 integrated graphics solution.

Programs using Advanced Vector Extensions (AVX) will run on this processor, boosting performance for calculation-heavy applications. Besides AVX, Intel is including the newer AVX2 standard, too, but not AVX-512.

Now, we have some early gaming benchmark results courtesy of AnandTech, but full system specs were not disclosed because of NDA. The system BIOS used was also not likely final, so the gaming performance might slightly differ (once tested on a system using a compatible BIOS).

As AnandTech’s Dr. Ian Cutress said, “As per our processor testing policy, we take a premium category motherboard suitable for the socket, and equip the system with a suitable amount of memory running at the manufacturer’s maximum supported frequency.”

“While we can’t disclose the motherboard used due to NDA reasons, it has already been announced by the manufacturer. Meanwhile, the BIOS used is likely not the final variant that will be used for Rocket Lake’s retail launch later this month, and further BIOSes may contain potential minor adjustments to performance or turbo responses.”

I will only focus on the main gaming benchmarks, and I suggest you to read the full review article posted by AnandTech, if you want to get more information on this Rocket Lake processor’s performance.

The test most likely appears to have being done on a Z590 motherboard platform. ADATA’s 16 GB DDR4-3200 (CL22) memory kit and a True Copper heatsink with dual SST-FHP141-VF fans were also used for this system.

So without further ado here are the gaming benchmarks. I’m only sharing the lower resolution benchmarks, since they are more CPU-bound, with the game quality settings set to low/min.

DEMD is often considered a CPU-limited title, so when the 11700K is better than the older Intel CPUs is at the low resolution, low quality setting, that confirms that. But as we ramp up the resolution, and the quality, the 11700K falls behind ever so slightly in both averages and percentiles.

As the resolution increases, the 11700K seemed to get a better average frame rate, but with the quality increased, it falls back down again, coming behind the older Intel CPUs.

Gears Tactics. Tested on 720p Low, 4K Low, 8K Low, 1080p Ultra. Gears is the one test where 1080p maximum settings shines ahead of the pack. Although at high resolution, low quality, although all five CPUs are essentially equal, it still sits behind AMD’s Ryzen APU.

As we can see from the above gaming benchmarks, Rocket Lake-S CPU shows rather disappointing results, which is surprising given the 19% IPC increase claim by Intel over the previous 10th gen Comet Lake CPU lineup.

The improvements Intel has made to its processor seem to do very little in these gaming tests, and in a lot of cases, we see performance regressions rather than improvements. If Intel is touting a +19% IPC, then why is gaming performance so adversely affected?

The reason given by Anandtech is that Rocket Lake has some regressions in core-to-core performance and its memory latency profile, which made it slow in gaming. It appears that the Intel Core i7-11700K suffers from increased L3 cache latency. From 43 cycles on Comet Lake-S to 51 cycles on the Rocket Lake.

“The biggest change is that the L3 latency is now ~51 cycles, rather than ~43 cycles. This is probably where a lot of the core-to-core latency performance drop comes in, as we are now seeing latencies of 28-30 nanoseconds on most cores, rather than 18-24 as observed on Comet Lake.

The much slower L3 in raw cycles is contrary to what we saw on the Sunny Cove version of this core, and with no obvious answer as to why this might be the case, but it does lend itself a lot as to the gaming performance. Intel may at a later date disclose the exact reasons for this structural change.” 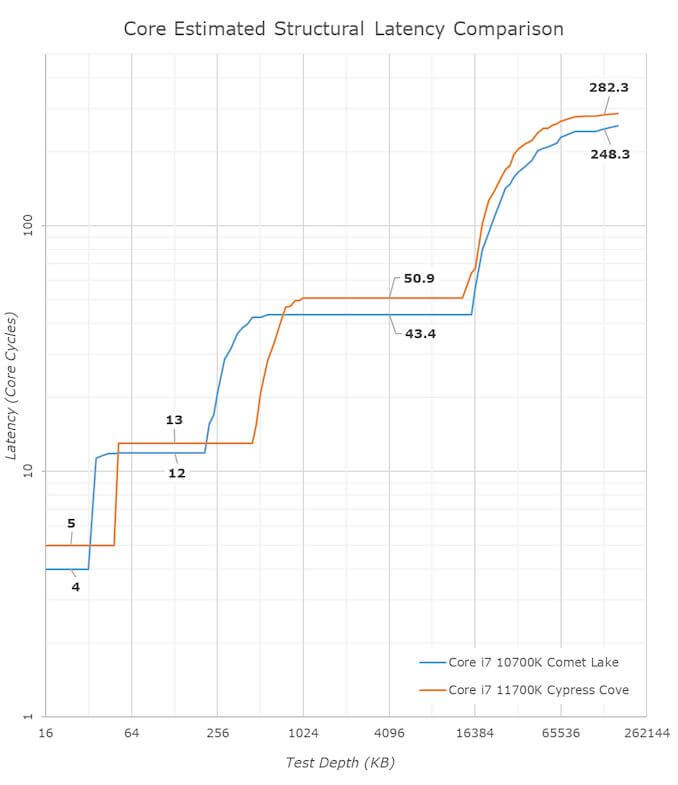 Lastly, we have the power consumption and temperature numbers. The CPU has a default TDP of 125W but it reached 225W during AVX2 workloads, with a temperature value of 81C. General workload was around 130-155 W at 60C. However, the CPU also peaked at 292W during the AVX-512 workload.

This was during an all-core AVX-512 workload, automatically set at 4.6 GHz, and the CPU hit 104C momentarily. There’s no indication that the frequency reduced when hitting this temperature, and the cooler used was easily sufficient for the thermal load, which means that on some level we might be hitting the thermal density limits of wide mathematics processing on Intel’s 14nm node.

Rocket Lake is going to be hot and power-hungry and will definitely require you to invest in a beefy AIO liquid cooler, alongside a high quality rated PSU.

According to SiSoftware’s own benchmark results, the new Intel Core i7-11700K was slower than AMD’s Ryzen 7 5800X, and also more inefficient than Skylake and power-hungry too.

These results clearly show that Intel’s performance, albeit substantial, still trails its main competitor, AMD. In a core-for-core comparison, Intel is slightly slower and a lot more inefficient as well.