Nvidia has already released its Ampere lineup of GPUs, and we have been hearing a lot of chatter on the web regarding the company’s plans to counter AMD’s upcoming RDNA 2 GPU lineup of cards. Many new SKUs were already rumored before, some also got cancelled, but some of the cards are still on the launch pipeline, sporting better specs than previous counterparts as well.

If you have been following the latest tech news and Nvidia’s roadmap since past few months or so, then you might have heard rumors that Nvidia was allegedly prepping to launch more SKUs in the current Ampere GPU lineup. Now we have some updated and fresh rumor regarding the RTX 3080 Ti GPU specifications, once again as reported by Kopite7kimi, a known and reliable Nvidia leaker.

According to a previous rumor as posted by Kopite7kimi, Nvidia was working on a new Ampere series GeForce RTX 3080 Ti GPU, sporting 9984 cores and 12/24GB GDDR6X VRAM. But now the same leaker has shared some updated specs of this GPU. It seems that NVIDIA has finally settled on a new graphics card to combat AMD’s RX 6800 XT GPU, offering more VRAM and also much beefier specifications than the existing RTX 3080 10 GB SKU.

The recent rumors regarding the RTX 3080 Ti specs paint a card having the same CUDA core count as the flagship high-end RTX 3090, sporting 10496 FP32 CUDA cores over the same 320-bit memory bus as the current RTX 3080.

Based on these new specs, we are basically looking at a RTX 3090-performance level, but at a slightly lower price point. It might be possible that NVIDIA will disable some select blocks on the GA102-250 GPU die, and/or this GPU will feature slightly lower clock speeds as well, but this remains to be seen.

When it comes to the memory specs, the card will feature 20 GB of GDDR6X VRAM, but will retain the same memory speed as the current RTX 3080 GPU at 19 Gbps.

The card won’t feature any NVLINK support, so you won’t be able to SLI these two cards. Not a big deal though, since multi-GPU is already dead in the water.

It appears that we finally have a new SKU based on a 20 GB GDDR6X memory configuration. Since the GeForce RTX 3090 is around 10-15% faster than the RTX 3080, the RTX 3080 Ti is also expected to fall within the same performance bracket/range.

Maybe Nvidia thought the previously planned SKUs won’t be able to tackle AMD’s RX 6000-series Big Navi GPU lineup in terms of performance, so the company may have a new SKU in the works, with better specs as well, instead of just having more VRAM slapped on the PCB.

The next leak we have to share is for the RTX 3060 Ti GPU. We have an exclusive first look at one custom AIB GPU model from GIGABYTE.

In case you missed this article, the NVIDIA GeForce RTX 3060 Ti mainstream Ampere GPU is rumored to launch on December 2nd, 2020. This GPU model was originally planned for November 17th, but got delayed. We also don’t know whether Nvidia is planning to release a Founders Edition variant of this GPU model. But we can surely expect to see several AIB custom Models for this card though.

Videocardz has shared some renders/pictures of one custom RTX 3060 Ti GPU model from Gigabyte, the Eagle OC. This is the first time we are getting some leak to back up this rumored RTX 3060 Ti SKU. Looking at the pictures, the graphics card features a relatively short PCB, with a dual-fan cooler which extends beyond its length.

This custom Model seems to be factory overclocked, though we don’t have the exact GPU clock speeds yet.

The card seems to feature at least four huge copper heatpipes that run through the aluminum heatsink, and the heatsink and shroud extend beyond the PCB. Gigabyte has also included a sturdy backplate. 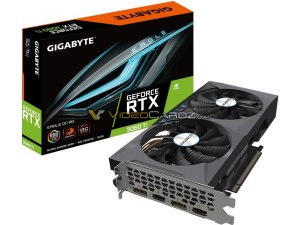 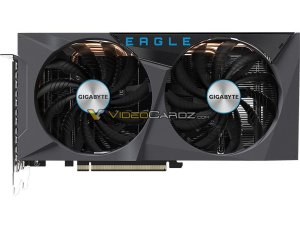 According to some reports from AIBs, the RTX 3060 Ti GPU is going to see a similar stock issue at launch. Since this is a mid-range/mainstream card, the demand for this GPU is bound to be higher. Even though the launch date of the RTX 3070 was delayed by almost 2 weeks, the card was still sold out very soon, despite more stock.

This should be the first budget mainstream offering from Nvidia, and the next GPU to get released in the Ampere lineup. Coming to the specs, the RTX 3060 Ti is going to be based on the 392 mm², 17.4 billion transistor GA104-200 GPU silicon chip. The RTX 3060 Ti is the new mid-range/mainstream graphics card in the Ampere lineup, and the price is expected to be around $400 USD (a rough estimate).

Nvidia has not yet announced this x60 SKU, though we have been hearing rumors that Nvidia might release two variants, based on the GA106 and GA104 GPU core/silicon die.

The GA104 GPU would likely adopt the Ti or Super branding. And we expect the GA106 silicon to be featured on the plain RTX 3060 GPU (the non-Ti/Super variant), and rumor has it that this card might feature 6 GB of GDDR6 memory over a 192-bit wide bus interface.

Moreover, the card will have 152 Tensor Cores, and 38 RT Cores, respectively, and the power consumption or TDP is expected to be around 180-200 Watts. This GPU seems to be more of a successor to the GeForce RTX 2060 SUPER SKU. We also expect the RTX 3060 Ti to even match the performance of the RTX 2080 Turing GPU clock for clock.

Someone also posted a GPU-Z screenshot confirming most of the specs of this GPU, as outlined above. This appears to be a custom card from board partner HP. Most of the specs are accurate except for the TMU/texture mapping unit count.

ROP or raster operations pipeline count is 80. Also, the RTX 3060 Ti will have a base clock of 1410 MHz and a boost clock value of 1665 MHz, as reported by the software. This screenshot further confirms the existence of this new Ampere GPU.

According to a new report from HKEPC, NVIDIA will launch the RTX3080Ti in January 2021.