SuperData Arcade has shared its monthly report, claiming that Fortnite has finally surpassed $300 million in a single month. Moreover, and even though EA has re-introduced micro-transactions in Battlefront 2, the game’s additional content in May fell short of the levels seen across other top games this year.

Regarding these two titles, SuperData Arcade had this to say:

Fortnite hits a new high but growth is slowing down. We estimate that Fortnite made $318 million across all platforms in May, up 7% from April. The majority of growth came from console, with mobile and PC both coming in flat compared to April.

Star Wars Battlefront II players don’t bite on new microtransactions. EA reintroduced microtransactions in April, months after facing backlash over a perceived pay-to-win model at launch, but the reception has been pretty muted so far. SWBF2 Additional Content in May fell short of the levels seen across other top games this year.

In other news, SuperData Arcade claimed that consumers spent an estimated $9.1 billion digitally across all platforms, up from $7.3 billion last May. The biggest growth driver was Mobile, which was up 36% year-over-year, while Free-To-Play Console contributed an incremental $200 million due to Fortnite.

Last but not least, you can find below the world’s most popular digital games across PC, console and mobile for May 2018. 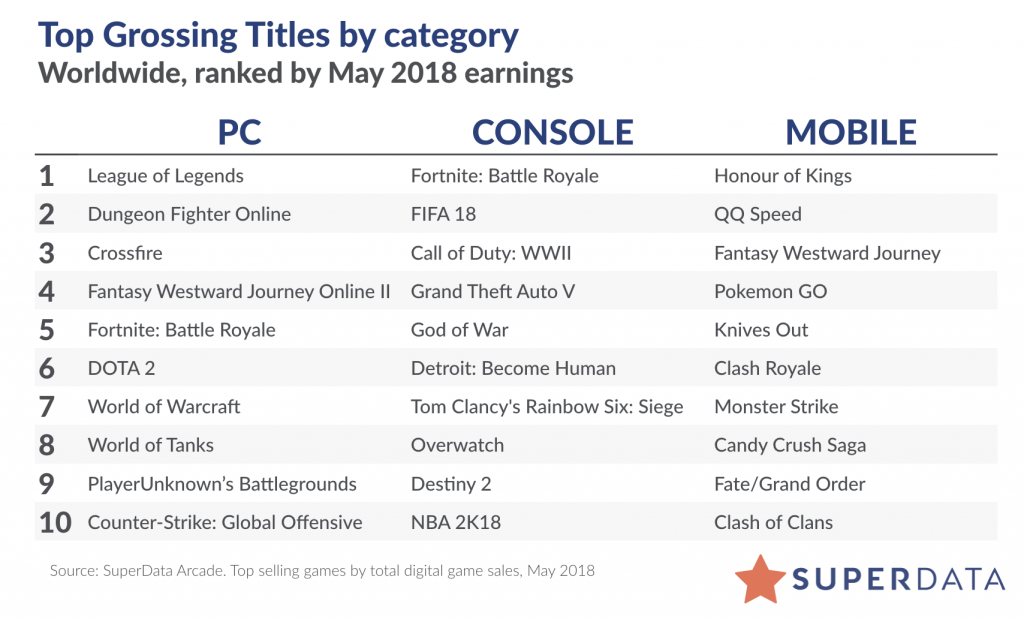