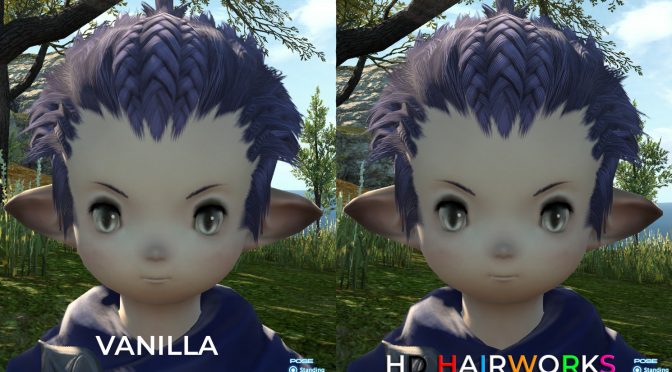 Final Fantasy XIV fans, here is something for you today. Modder ‘Saika Darkmoon’ has released a new mod called Hairworks 2 that upscales every hair texture in the game to 4K, and hand-touches and downsamples them to 1K and 2K across the board.

The Texture Pack features over 700 reworked hair textures for every race, and gender including Miqote tails.

In order to install it, you’ll have to download the pack from here and follow this guide.

In order to showcase the visual differences, Saika Darkmoon has shared some comparison screenshots between the vanilla and the reworked textures that you can find below.

To be honest, I can’t see any major differences between them. The reworked textures definitely look better but, to be honest, I was expecting a higher visual improvement, especially when this Texture Pack weights around 1.3GB. Also, this pack does not enable any NVIDIA hairworks effects, so don’t expect such improvements.

But anyway, I’m pretty sure that some FF players will appreciate it so have fun!