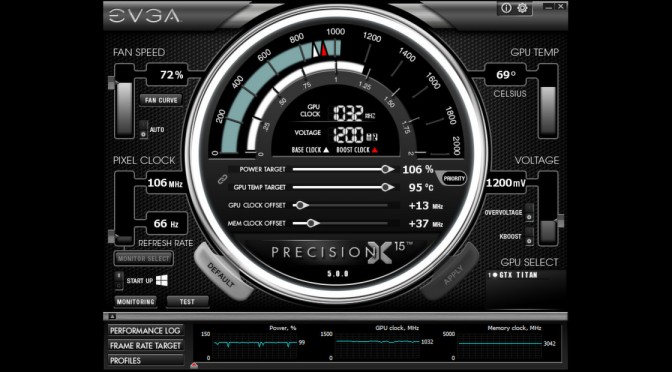 News flash everyone. In order to compete with MSI’s Afterburner, EVGA decided to re-design its Precision X program and release it on Steam. Normally, this wouldn’t be worth mentioning, however the coder of the RivaTuner Statistics Server claimed that EVGA has stolen his code.

But let’s take things from the beginning. Yesterday, EVGA released Precision X 15 on Steam. This new version of its Precision program is said to be written from the ground up, and does not contain any code from its previous version.

Alex/Unwinder, creator of RivaTuner, took a look at it and went berserk. According to Alex, EVGA has stolen a lot of the features that were present in the previous version of its Precision program that were coded by him.

Here is what Unwinder had to say about the new EVGA Precision X version:

•Original EVGA Precision EXE resources and dialog templates were copy-pasted to this “in-house” project as is, even original dialog control IDs are the same. Company PRs already claim that GUI is 100% designed by EVGA which is sadly not true, company designed concept art of EVGA Precision skin only. All product properties, entire monitoring section, setting and so on came from directly original RivaTuner (and were available in other RivaTuner based products like HIS iTurbo years before Precision was born) and EVGA has no relation to designing them at all. So company directly violated our license agreement terms and reverse engineered licensed binaries to copy data from it and represent it as their own design.
•EVGA completely cloned original RivaTuner’s RTMUI multilanguage context help system and localization engine. Contents of “Help” and “Localization” folders were copy-pasted to new product as is from original Precision, including localization and GUI translation databases for different languages. “Help” folder contains direct mapping of dialog IDs to help files, I guess getting easy access to it as direct reason of “copying” original dialog templates with original dialog IDs. So the company also violated our license agreement terms and redistributed parts of original product without permission.
•Even “in-house” skin still uses my original raster fonts from old good RivaTuner. But at least that can be partially justified. Out intellectual property ownership terms of agreement define that I own software product copyrights, the company exclusively owns the product distribution rights as well as non-software intellectual properties like trademarks, product name, logos and artwork I create for them during the contract. So you may try to fit “copied” fonts in this category if you close eyes on the fact that it came from original RT.
•Fun thing, even for the installer of “in-house” product the company copy-pasted my own license agreement from original installer, which contains my own third party components licensing terms and direct restriction on reverse engineering or redistributing them. Probably you’ll at least read what exactly do you copy paste, EVGA?
•The most sad and painful thing for me is that the company entirely copy-pasted RivaTuner’s unique concepts of displaying data into On-Screen Display. RvaTuner Statistics Server was the first tool in the industry that introduced the concept of in-game hardware monitoring via OSD back in 2005, I spent almost than 10 years on polishing it. And most sad thing for me is that original Precision was not supposed to include such functionality, so it is not included in development budget and royalty fees. I added RTSS to Precision in one of the first versions completely free of any licensing fees just to help the company to promote new tool and it truly became one of the most important application features. So it was used during more than 5 years completely free (and the company was never brave to admit that) and in final they originally “thanked” for free OSD usage by stealing it. EVGA’s brand new “in-house” OSD is also open a simple rip of open source FW1FontWrapper overlay. And If I were the developer of FW1FontWrapper, I’d read the story of RTSS and think 1000 times about it.

EVGA was quick to respond, and claimed that while there are some visual similarities between the old and the new version of Precision X, every line of code is brand new. Not only that, but EVGA claimed that Unwinder’s claims were false as he never released the source code of RivaTuner to EVGA.

1. The EVGA Precision main GUI (main Window) and format was fully designed and owned by EVGA, that means Alex/Unwinder did not design the Precision GUI at all. The Rivatuner technology was used for the backend like GPU reporting, OSD and overclocking. Other features like voltage tuning, pixel clock control and Bluetooth function were coded by EVGA. We want it to be clear that Rivatuner source code has never been released to EVGA. A year and half after Precision was introduced, Afterburner was released, that shared a lot of the same ideas and concepts originally set by EVGA’s Precision, and also used Rivatuner technology.
2. Most gamers knew that some of the key features that have been requested and missed such as 64bit OSD, voltage control and video recording in the early versions of Precision, yet Afterburner had it. You probably don’t know that some of those ideas were initiated and requested to Alex/Unwinder by EVGA to implement into Precision well before it was available in Afterburner, but Alex/Unwinder had no intention to add it. One year later they showed up in Afterburner exclusively without any notification and/or offer to EVGA. We felt that we became Alex/Unwinder and Afterburner’s free consultant if we continue this route.

Truth be told, EVGA’s Precision was unable to display on-screen stats in 64bit games, something that really puzzled us considering the fact that Afterburner had no such issues. I guess we all know now what happened.

For what it’s worth, this whole drama seems pointless as both of these programs can be used for free. Or at least that’s what most gamers will say. Here is some food for thought: If these programs didn’t generate revenue, would EVGA and MSI compete to be the one with the best overclocking and video-game monitoring program?