The following video features work-in-progress gameplay footage, showcasing the full-impact, destruction-focussed racing featured in DiRT Showdown’s 8 Ball event. The stage is a dirty, dusty circuit in the sun-baked Nevada desert where eight racers perform in front of the crowd, taking on jumps and dangerous crossover points as they jostle for position against a backdrop of fireworks and fire cannons. Boost is used to speed through gaps and smash rivals as the drivers – racing vehicles tuned for chaotic, aggressive racing – trade paint and crash out as they battle to become the star of the Showdown.

DiRT Showdown will deliver a new world of competitive and combative racing as players boost, trick and smash their way to ‘Showdown’ finals on a chaotic tour of motorised mayhem.

There are three broad categories to DiRT Showdown’s thrilling action-sports racing. Players will use nitrous to blast past rivals and negotiate courses filled with ramps, pinch points and obstacles in full-contact Racing events. Gaming’s most advanced damage engine is unleashed in Demolition Derby themed events where players smash and crash their way to victory in bone-jarring style. Finally, in Hoonigan events, gamers will send fans wild in huge stunt parks where accessible new controls offer every player the chance to become a freestyle driving hero.

From San Francisco to Miami and London to Tokyo, players will dominate their rivals and wow the crowds on their way to becoming a driving superstar. Pyrotechnics, lasers and thousands of fans give each venue a vibrant sports entertainment atmosphere, with the player taking centre stage. Over 50 different events across four championships will challenge gamers in a variety of conditions – sun, snow and rain – through the day and under the floodlights at night.

DiRT Showdown will feature an exciting new line up of off-road machines. Ken Block’s all new Gymkhana FOUR H.F.H.V. Ford Fiesta debuts alongside an eclectic mix of vehicles across a range of classes. From saloons and muscle cars to pick-up-trucks, hearses and vans, players have a wide selection of custom cars to trick, race and destroy.

DiRT Showdown will be Codemasters’ most connected game ever – split-screen multiplayer, eight-player online racing, on and off-line quick-fire party games and YouTube integration all come as standard. Players will also be able to issue ‘Showdown Challenges’ to compete with friends whether they are online or not. 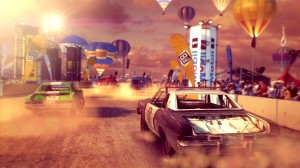 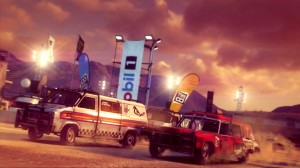 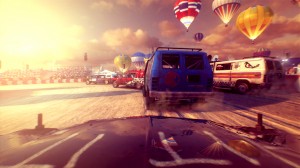 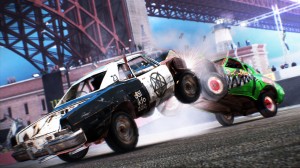 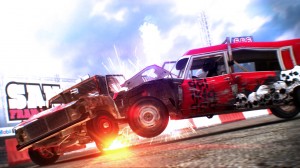