“In this DLC pack, fans have the opportunity to immerse themselves in another great character and action-packed story from the DC Universe. With exciting gameplay, a new power set and new locations to share with your friends, we packed a whole new kind of fun into this DLC pack and are eager for our players to dive into another legendary adventure.”

In addition to the new Electricity Power set, DC Universe Online players will also be able to interact with The Flash-themed characters and content with new maps and features:

-Central City – An all-new map that offers players a more open world experience that provides on-going gameplay, with solo and group missions.
-The Flash Museum Duo – Players can now experience the Central City of today and tomorrow. In The Flash Museum Duo, players can travel back in time to the very moment when Barry Allen became The Flash and battle foes inside the Central City Police Station!
-Electricity Powers – Players now have the opportunity to get the new Electricity Power set for current and new characters. The new Electricity Power set allows players to leverage the lightning power of electricity and use new types of attacks in combat. Electricity Powers include the Tesla Ball, which creates a floating ball of electricity that zaps nearby enemies; the Shockwave, which shoots streams of electric bolts at enemies; and Ionic Drain, which drains energy from the environment to replenish a player’s health while simultaneously damaging surrounding enemies.
-New Gear – Players can earn all-new gear sets including the new Zoom-inspired gear set for villains, and the new Black Lightning-inspired gear set for heroes.
-New Characters – Lightning Strikes brings players new iconic DC Universe characters including Livewire, Black Lightning, The Top, The Trickster, Static and more. New characters – such as Livewire – will be featured as new “Inspired By” options for players who can choose to create a new character inspired by some of DC Universe’s legendary characters. Additional new characters – such as Black Lighting – serve as a bounty mission that players can fight if they choose to be a villain.
-Lightning Strikes offers players a new story-driven adventure that offers up even more of the intense and fast-paced combat that distinguishes DC Universe Online, a game focused on superhero combat set in locations where gamers can showcase over-the-top powers in epic battles. The Flash adds another legendary superhero for players to battle against or alongside on their journey to becoming the next legend.

DC Universe Online’s Lightning Strikes DLC pack will be accessible for free for all of the game’s Legendary players and available for purchase for $9.99 USD for all Free and Premium players from the PlayStation Network Store, through the in-game Marketplace and on the PC from the DCUniverseOnline.com website. 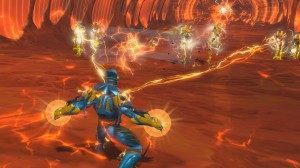 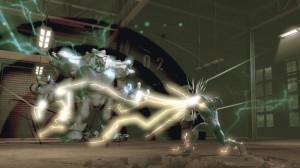 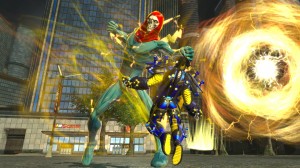