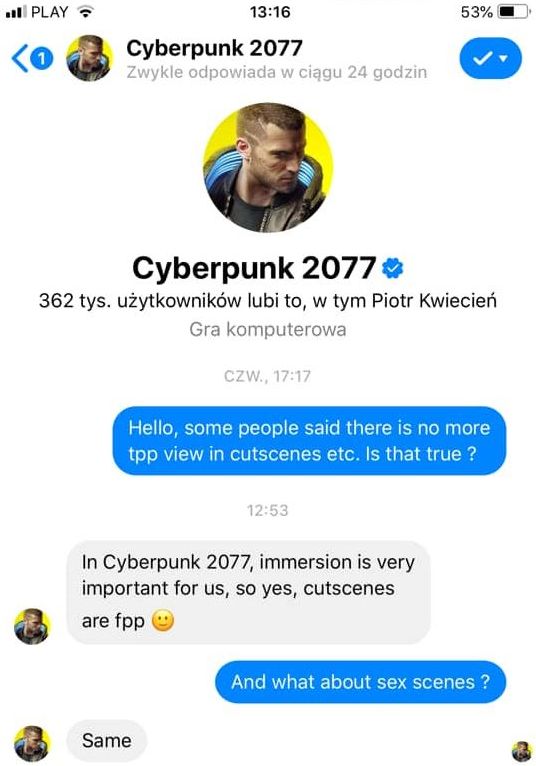 What’s also interesting here is that in its recent podcast, CD Projekt RED could neither confirm, nor deny the first-person perspective in the game’s cut-scenes. Surely the team would deny such a thing if this was false information. As such, we can assume that CD Projekt RED has indeed abandoned its TPP cut-scenes plans.

If CD Projekt RED will be indeed using a FPP for its cut-scenes, it will make it pretty difficult for players to enjoy their custom-made characters. The only way via which they can see their characters will be through mirrors, inventory, while driving, or by looking down at their own body. Moreover, the developers claim that NPCs may comment on players’ style.

On the other hand, a first-person perspective may open up some new gameplay possibilities. So yeah, things are not as bad as some may initially thought. Still, you may be disappointed if you were looking forward to TPP cut-scenes.

CD Projekt RED has just confirmed that Cyberpunk 2077 will only feature first-person cut-scenes.

1/2 Achieving full immersion in an FPP game is extremely important and the decision made by the team to go 100% first person in @CyberpunkGame is something that will benefit it greatly from gameplay and story-telling perspectives.

2/2 That said, players will still be able to see their characters in the inventory screen, during driving sequences, in mirrors and, very occasionally, in some of the cut-scenes.