The Dark Pictures Anthology – Man of Medan has just been released on the PC. This game uses Unreal Engine 4, comes from the studio behind Until Dawn, and it’s time to benchmark it and see how it performs on the PC platform. 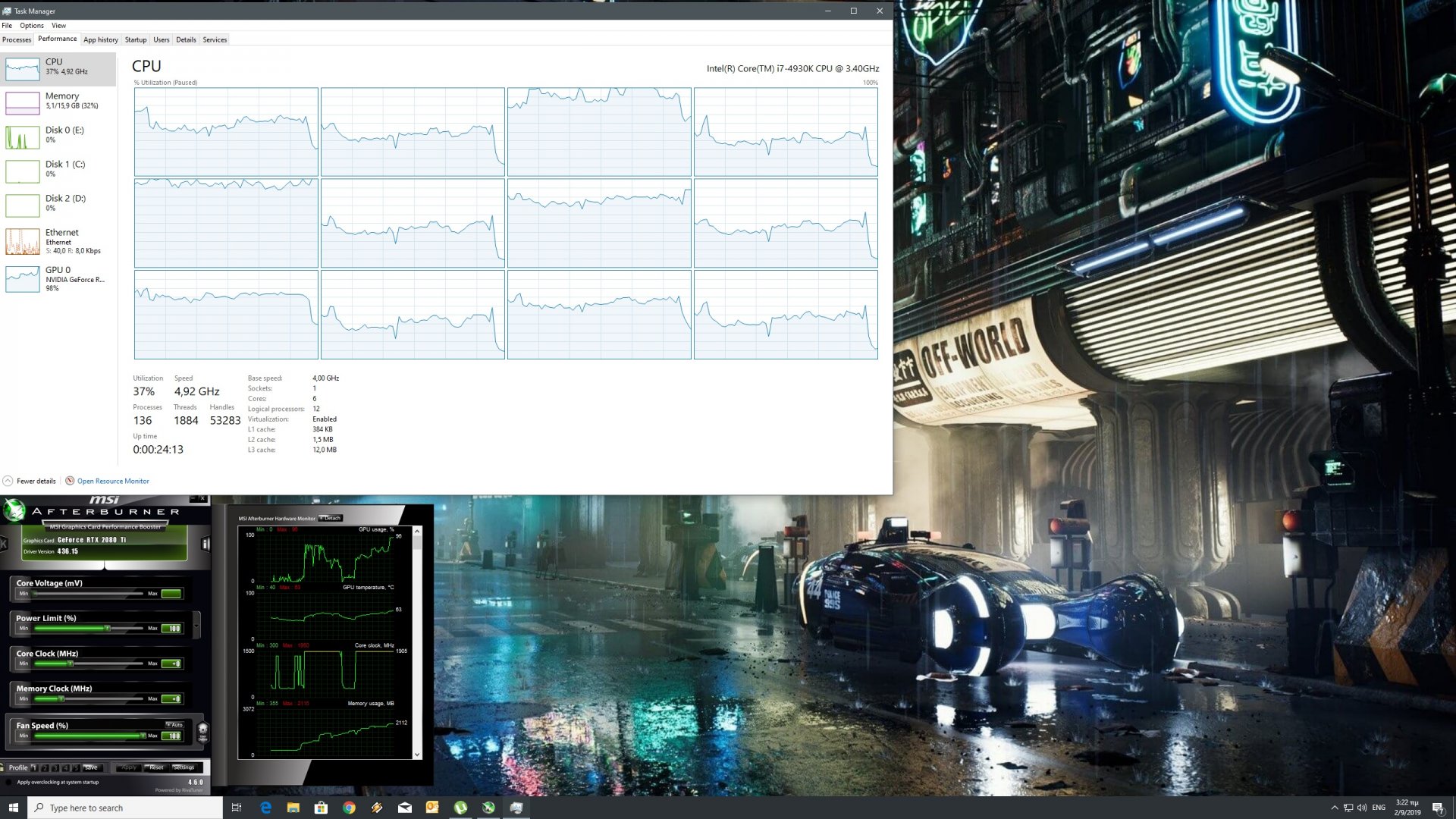 Supermassive Games has added very few graphics settings to tweak. PC gamers can adjust the quality of Anti-Aliasing, Textures, Shadows and Depth of Field. There are also options for SSAO, V-Sync, HDR and 30fps Framerate Lock. 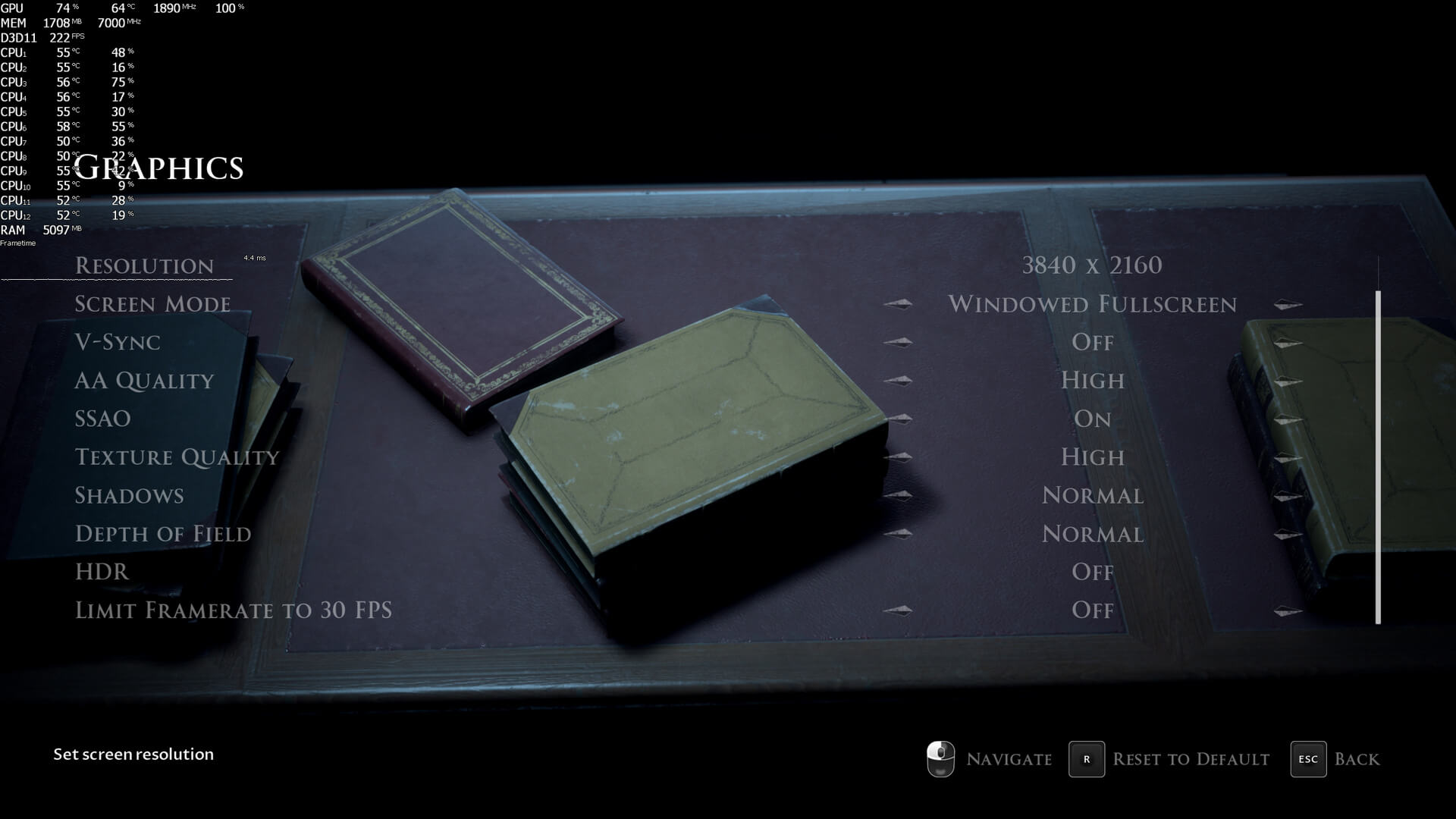 Since the game does not feature any in-game benchmark tool, we’ve benchmarked the main “boat” area at the start of the chapter. This area appeared to be more taxing than the prologue area. Naturally, for our CPU tests we also lowered our resolution to 1280×720 in order to avoid any possible GPU bottlenecks.

In order to find out how the game scales on multiple CPU threads, we simulated a dual-core and a quad-core CPU. Even without Hyper Threading, our simulated dual-core system was able to push more than 60fps. However, there were some noticeable stutters on this particular system. Once we enabled Hyper Threading, we saw a noticeable performance boost and we no longer had any stuttering issues. 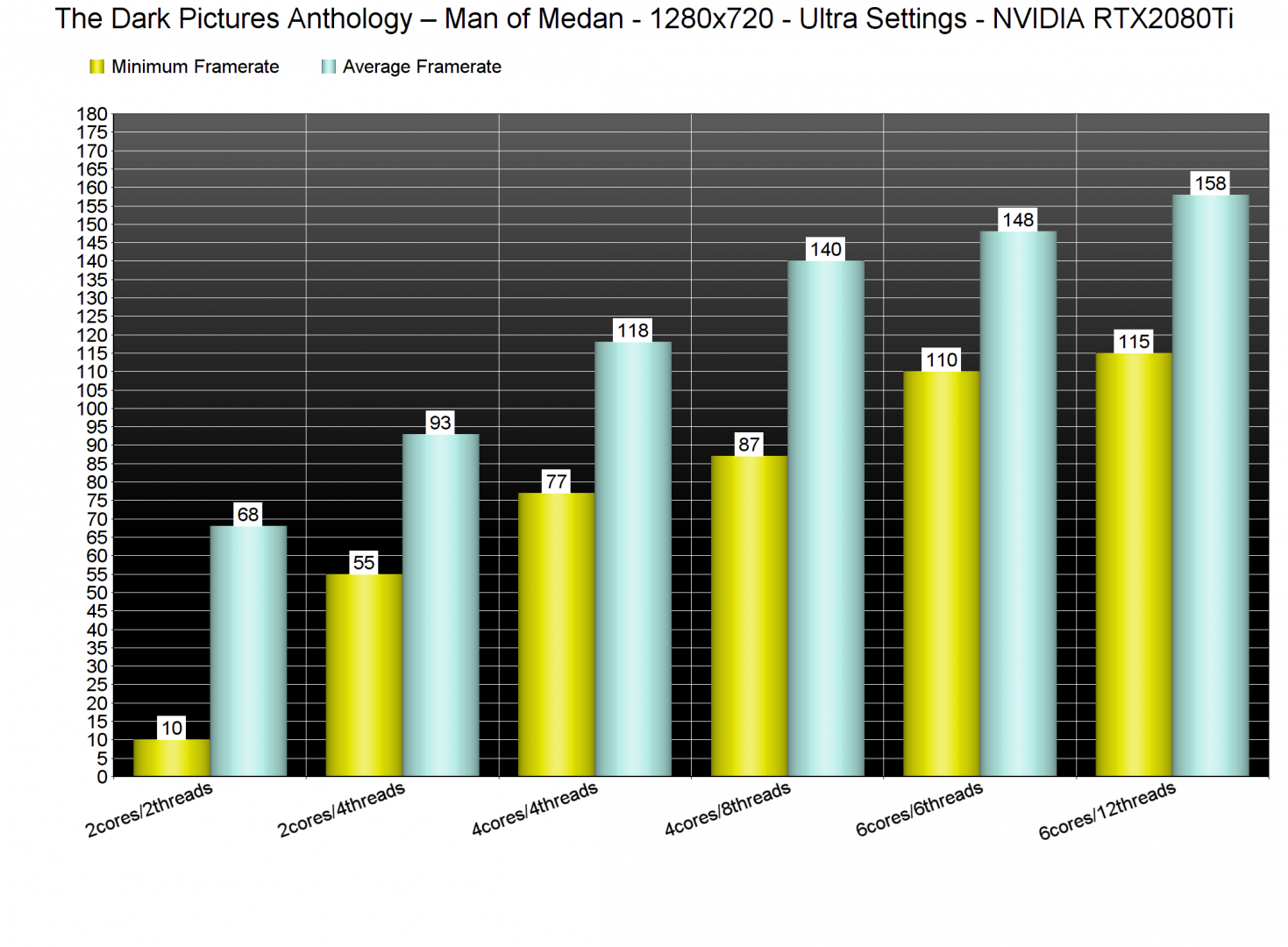 Given its light CPU requirements, The Dark Pictures Anthology – Man of Medan can be easily described as a GPU-bound title. At 1080p/Ultra settings, our AMD Radeon RX580 was unable to come close to a 60fps experience. On the other hand, the NVIDIA GTX980Ti, RTX2080Ti and AMD Radeon RX Vega 64 had no trouble at all running the game at that resolution. 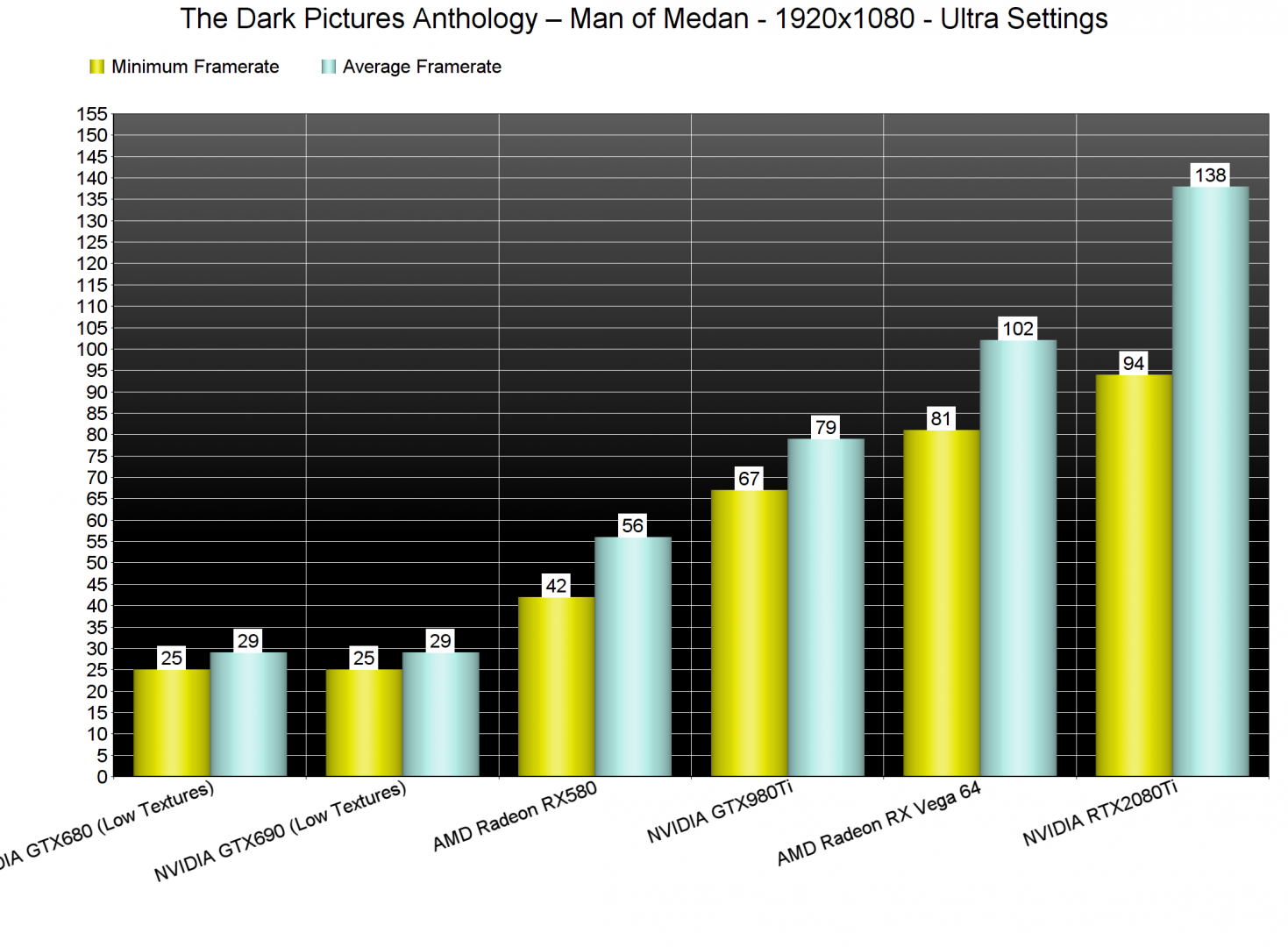 At 2560×1440, only our RTX2080Ti was able to offer a constant 60fps experience. And although the AMD Radeon RX Vega 64 did offer a smooth experience, however, there were some drops below 50fps. As for 4K, none of our GPUs was able to offer a smooth gaming experience. However, it appears that the game is currently bugged on NVIDIA’s hardware when running at such high resolutions. As we can see, in 4K the game performed similarly on both the RTX2080Ti and the Vega 64. Odd, right? Well, once we lowered our Shadow quality to High, we were able to get constant 70fps on the RTX2080Ti in 4K. We are pretty sure that this is a bug as we’re talking about a 100% performance boost when using High Shadows. 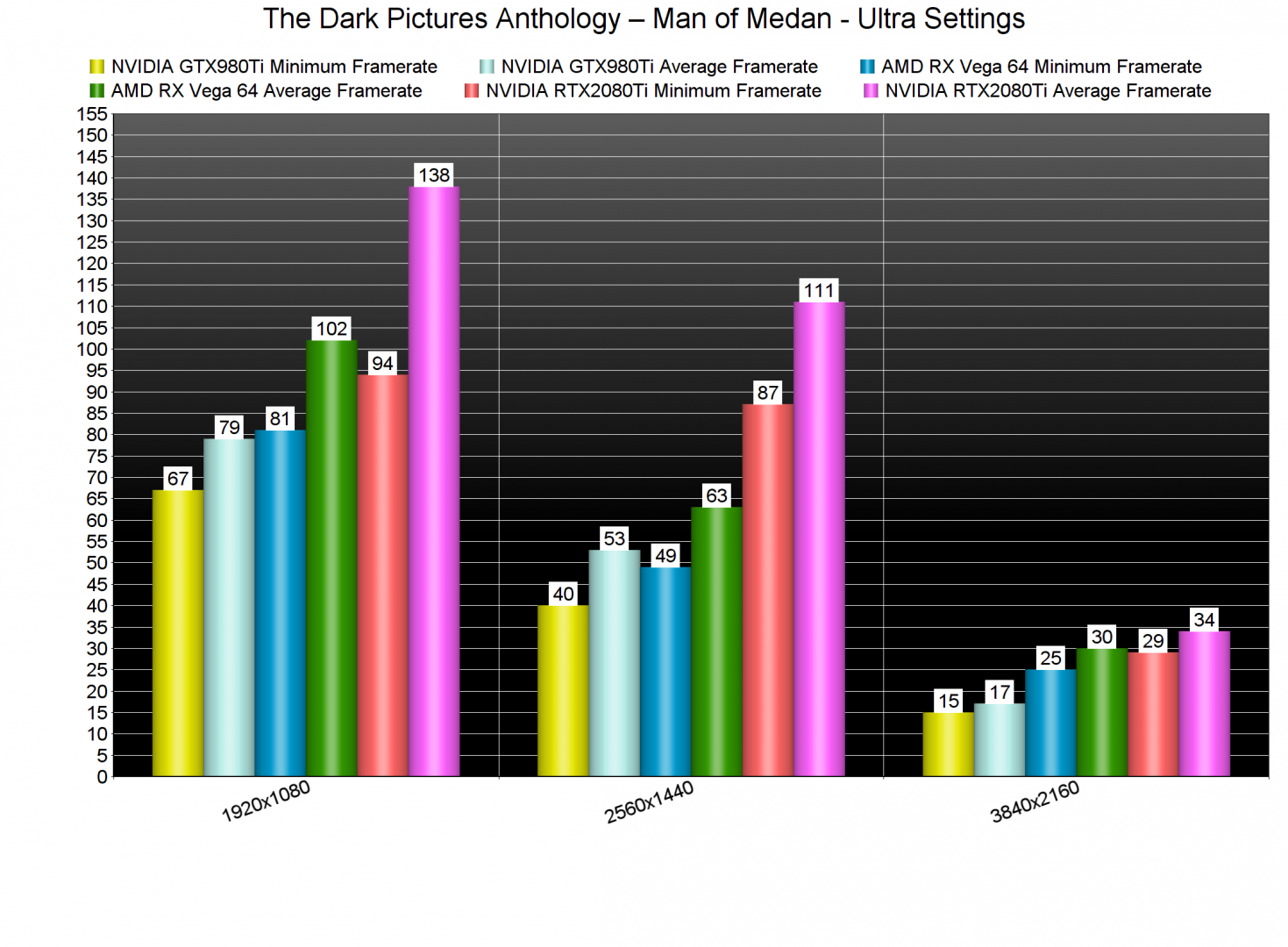 Graphics wise, The Dark Pictures Anthology – Man of Medan is looking good. All of the in-game characters look phenomenal, and the lip-syncing is – for the most part – great. The game features linear and really small environments that are full of small and great details. Although this is mostly an interactive movie and nothing more, Man of Medan looks at least great.

All in all, and with the exception of using Ultra shadows in 4K, The Dark Pictures Anthology – Man of Medan runs smoothly on the PC. While consoles are having trouble running it, most gamers will be able to enjoy the game on the PC. Man of Medan does not require a high-end CPU, and its GPU requirements are not that high. The game also looks great, and works fine with K&M as there are proper mouse and keyboard on-screen prompts.