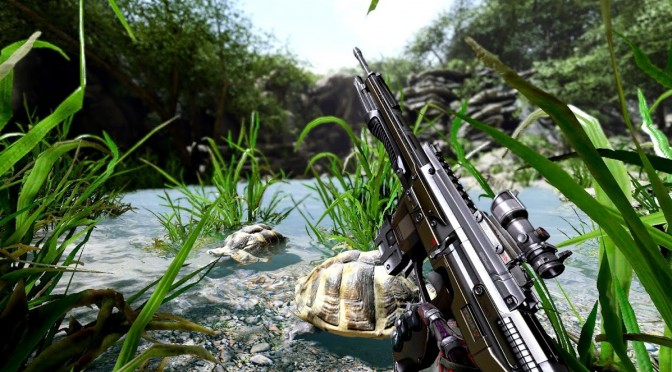 Ah, Crysis. One of the most unique PC FPS experiences back in 2007. Crytek’s masterpiece was way ahead of its time visually, and came with some truly great gameplay mechanics. Its level design, its enemy AI, its nanosuit abilities; everything felt great. And since today it’s its 10th anniversary, we’ve decided to share with you the best graphics mods you can use for it.

Let’s start with the mod that every gamer must use; POM + AF. When Crysis game out, PC gamers had to choices. They could either enjoy Parallax Occlusion Mapping, or force/enable Anisotropic Filtering. Due to engine limitations, Crysis did not support both of them. Thankfully, this mod allows you to enable both of them. This will immediately increase the graphical fidelity of the game. Therefore, you should download it even if you are not interested in any of the other mods.

Blackfire is our second mod of choice. This is a stunning and completely customizable Lighting Mod that changes the look of all levels of the singleplayer campaign of Crysis. According to the modders, the goal was not to bring a more reliastic lighting, but to bring more life to the game, and encourage people to replay the game, with an innovative look.

On the other hand, Maximum Immersion is a graphics mod that aims to get the best out of the graphics of this classic game. Contrary to Blackfire, Maximum Immersion targets a more natural and realistic look. This means that overprocessed shaders were not added to it. The mod contains all of the best available textures and a unique System.cfg, optimized for 2,5K and 4K downsampling. It also contains a tweak guide and adds hotkeys to the nanosuit functions.

Crysis Tod Texture Mod is a collection of mods for Crysis. It comes with numerous custom weapons, CRYZENX’s Shaders, Xtreme Particle Effects Chaos, and Tire POM. This collection also features the high-resolution textures from Rygel, Silent and Slicer91. Below you can find a video showcasing the mod in action.

Crysis Expanded MOD is a mod we featured in the past. This mod comes with new AI, new areas map, new textures, new watershaders, real time water reflections and a tweak menu.

Last but not least, Crysis “HD Textures Pack 2016” is mainly a high-resolution Texture Pack for Crysis. This pack does not bring any TOD changes, so this can be used by almost all PC gamers who wish to experience Crysis in its vanilla setting. According to its creator, this pack features textures that were specially chosen so that there is no drastic artistic change. Everything was done in order to maintain the original “atmosphere” of the 2007 version, but with higher quality textures.