At the recent CES 2021 keynote, NVIDIA officially announced the GeForce RTX 3060 GPU having 12 GB of VRAM. The GeForce RTX 3060 12GB VRAM GPU is coming out in late February. However, as now reported by Videocardz, proper specs of this exact GPU model were not shared in the official slides, and Nvidia also changed the specifications of this new GPU from 3840 CUDA cores to 3584, just two weeks before the official announcement date.

According to NVIDIA, the GeForce RTX 3060 12GB will have 13 TFLOPs single-precision compute performance with up to 25 TFLOPs in raytracing and up to 101 Tensor-FLOPS in AI-related operations.

The change in specs has actually caused some confusion amongst Nvidia board partner/AIBs, with some AIBs listing slightly different specs for this GPU.

From what I know so far, this new GPU is reportedly carved out from the 8 nm “GA106” graphics silicon; but it features a slightly different core configuration sporting 12 GB of GDDR6 memory (more VRAM than the RTX 3060 Ti, RTX 3070, and the RTX 3080 cards, respectively). So basically the RTX 3060 features the GA106-300 GPU core instead.

Though, Nvidia has not confirmed this since the official teaser video lacked info and details regarding this GPU model. The clock speeds were revealed, but it was just a round figure, but thankfully few of the board partners/AIBs have now listed and confirmed some of the specs of this upcoming GPU.

It might appear that this new RTX 3060 GPU will only come in AIB custom flavors, since Nvidia has no plans to release a reference “Founders Edition” design as well, but this remains to be seen. But in all likelihood, this card is going to be an AIB exclusive SKU only.

When it comes to other AIBs, like e.g. PNY and PALIT, both the manufacturers are currently listing the same specs regarding RTX 3060’s memory capacity, power consumption, and CUDA core count, however, the clock speeds and the maximum bandwidth of this new card don’t seem to match.

PNY appears to have listed different specs than other AIBs, but Videocardz reports that this could be an error. Some of the specifications listed might be based on a completely different card such as the RTX 3060 6GB SKU, which is still in Nvidia’s launch pipeline, assuming past rumors are to be accounted for. 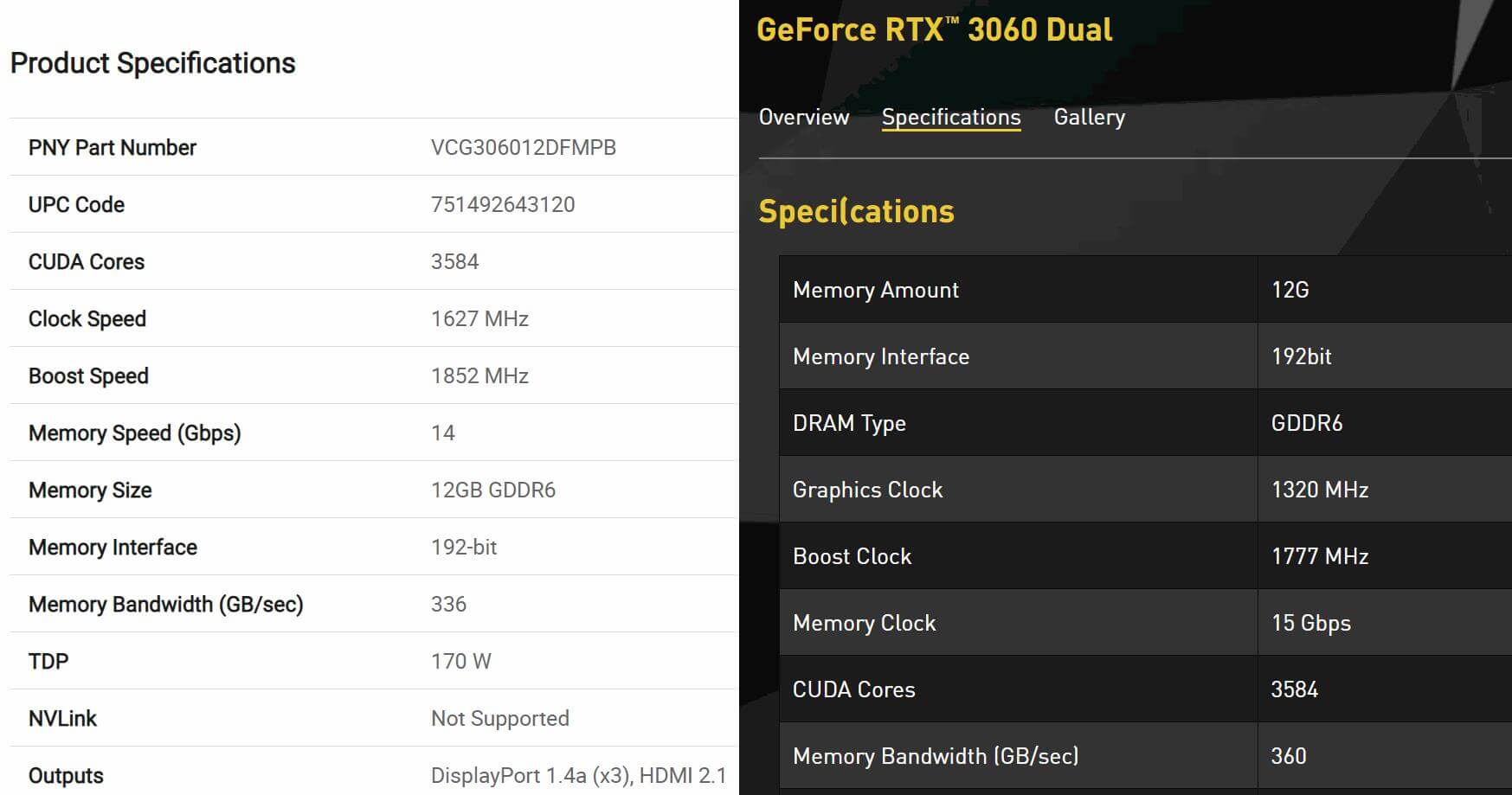 Chinese Galax AIB has confirmed that this GPU is based on the GA106-300 graphics core processor, as evident from this official specification sheet.

Gainward AIB datasheet on the other hand confirms that the RTX 3060 Ampere SKU is indeed fabbed on the 8nm process node. The rest of the GPU specs also seemingly match with the GALAX brand.

Lastly, as again pointed out by Videocardz, Nvidia’s official teaser was actually featuring the GA102 GPU instead of GA106, and the number of memory modules did not seem to match either.

So we are still not fully sure which GPU Nvidia showcased in the official teaser before, which gets even more confusing. 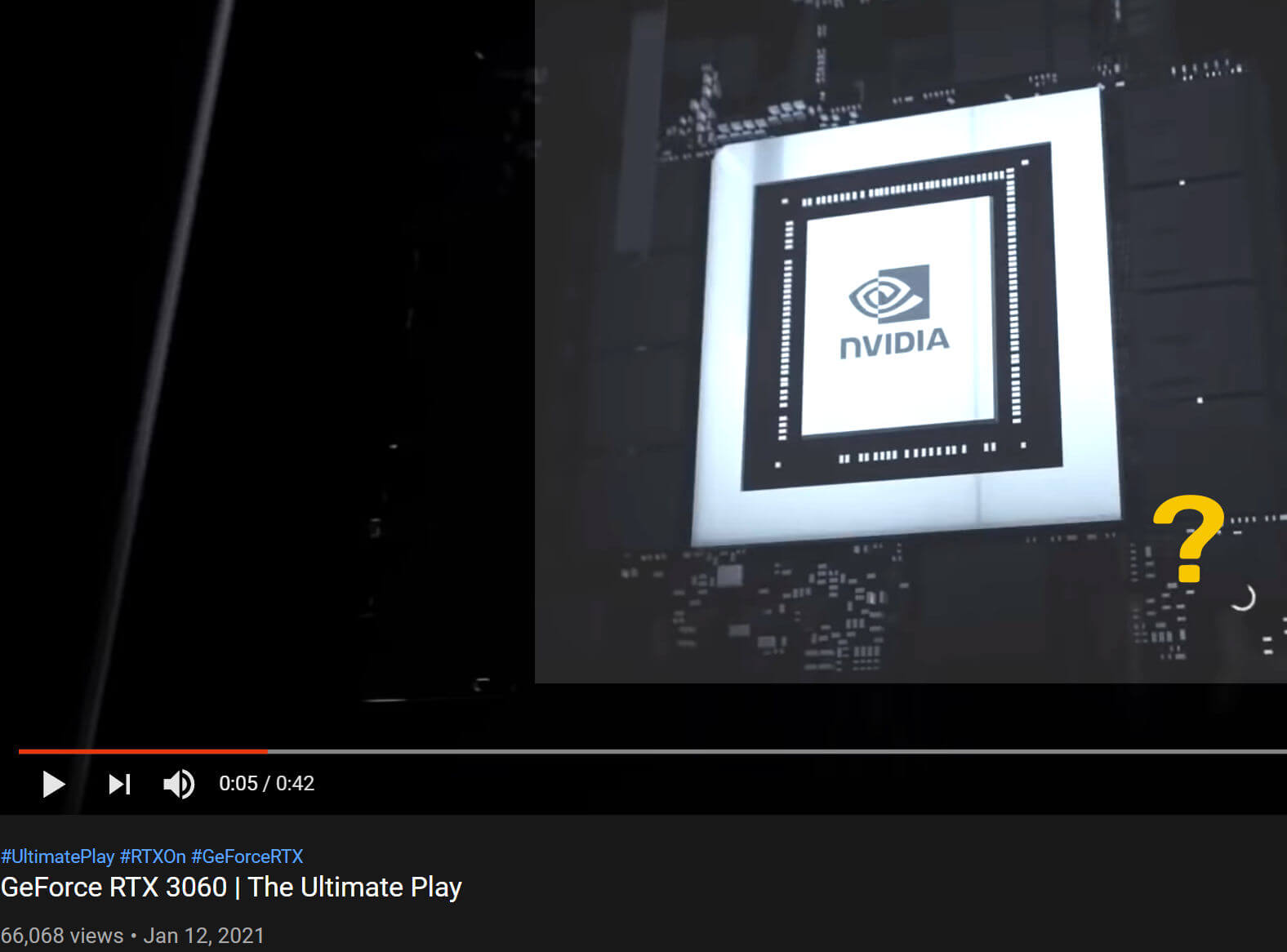 The graphics card has a TDP of 170W. This mainstream Ampere GPU graphics card will feature a reference MSRP of $329 US which makes it the most affordable 12 GB graphics card ever made. The card is also $70 US cheaper than the RTX 3060 Ti which of course is faster, but it only offers 8 GB GDDR6 VRAM.