Ah, the Internet. You can find anything there, from glorious leaks to awkward troll attempts. One such attempt was a teaser site that got spotted today, supposedly revealing that a teaser trailer for Modern Warfare 4 would go live on March 21st. This website was hosted in Russian name servers and Infinity Ward’s is most probably headquartered in Russia. Not only that, but the domain registration information from here says it’s registered to Infinity Ward.

It all seemed legit until Sam Kennedy, VP at Edelman Digital working with Activision, confirmed that this information is fake and that there won’t be any MW4 reveal in March 21st. 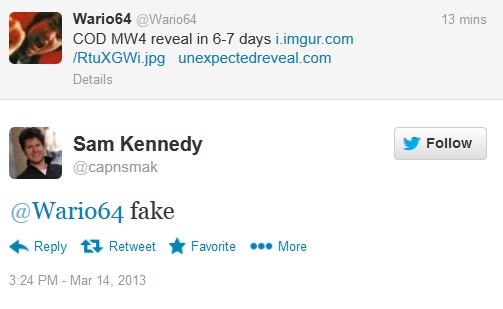 The name of the teaser website itself also looked suspicious. You’d expect to see something more ‘original’ than that.

Naturally, a lot of you will be wondering why they went into such trouble and created such a website to troll everyone. There are lots of reasons, but the most common is this; to laugh at people and at video-game websites/blogs for reporting such a story.

Or did Activision launch a website just to spark interest for its franchise? Or is an attempt to steal Battlefield 4’s thunder, which is said to be revealed in March 26th? Figures.

Sam Kennedy has contacted us about this story. Apparently, Sam is not an Activision rep but actually works in the Digital division of Edelman, a division that focuses on social media. Sam’s response was not official, and should not be taken as an official answer to that question.

As Sam told us:

“So I’m not actually a rep for Activision — I can’t say anything on the company’s behalf.

That’s where I’m a little concerned about the misrepresentation. Though I personally think it’s a fake, were it to later be revealed that it was real, it would be an untrue statement that a rep for Activision claimed it was fake. I completely understand how it may have appeared that way, though.”

All in all, Sam’s comment was his personal opinion on this matter and not Activision’s response. This obviously means that Activision has not commented yet on that rumor, and this could very well be a teaser site for the next Call of Duty title. Let’s all wait until March 21st to see what will happen!