Have you ever been to a forum and felt the need to joke around? You know, like say that you are ten years old or that you are a speaking dog? Well, forget all of these little jokes as BioWare will ban you if you write at their official forums that you are below thirteen years old. And no, we are not kidding.

As you can see in the following image, BioWare is serious about this and WILL ban you if you attempt something like that. A gamer claimed in a thread at SW:TOR’s forum that he was 12 years old and BioWare decided to permanently suspend him. According to the company, TOR accounts will not be allowed for minors under thirteen. In other words, a perma ban is guaranteed in this situation, even if you are simply joking about it. 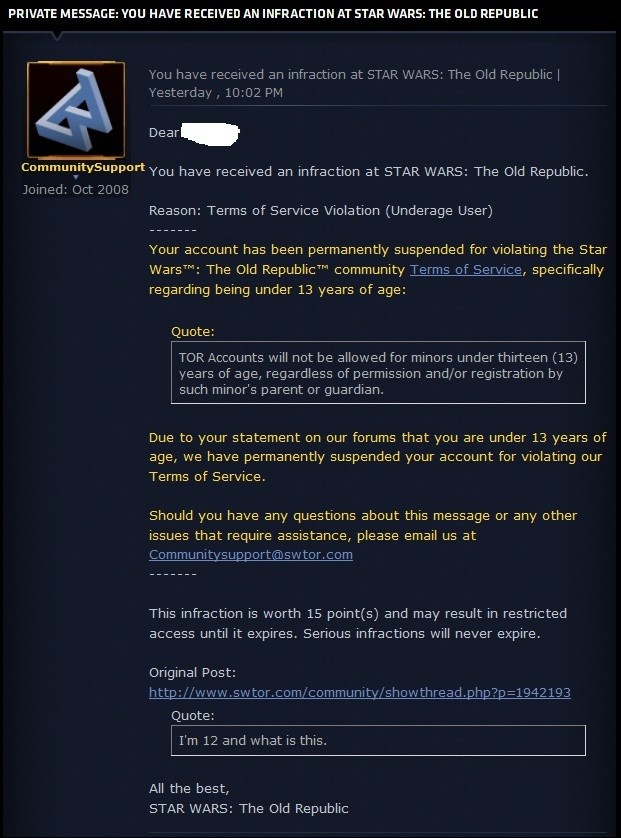 Of course you can mail the company and provide evidence that you’re adult and were simply fooling around at the time of posting, but there is no guarantee that BioWare will remove the perma ban.

This is also the first time we’ve seen this kind of reaction and… well… it’s actually shocking. So, if you want to enjoy Star Wars: The Old Republic, avoid all jokes about your age.

Special thanks to Rage3D’s user, Tork64, for sharing the image.