Back in May 2020, AMD issued a statement confirming the support for the upcoming Zen 3 processors on the B450 and X470 motherboard chipsets. Previously, AMD had mentioned that the next-gen Zen 3 CPUs won’t be backwards-compatible with the older 400-series boards, but the company actually had a change of heart and decided to offer Zen 3 CPU support.

This move will enable some of the users running the 400-series AMD motherboards to upgrade to the latest Zen 3 processors which are launching on November 5th. You will be able to run the Zen 3 processor on the AMD B450 and/or X470 chipset board once the right beta BIOS is installed.

However, this will also depend on the Motherboard manufacturer/vendor. ASUS seems to have taken a different approach. They are dropping Zen 3 CPU support on their older 400-series chipset motherboards.

In a recent AMD subreddit one user contacted ASUS regarding the compatibility of the upcoming AMD Ryzen 5000 CPUs on his motherboard, which is the ASUS ROG Crosshair VII HERO model, based on the X470 chipset.

And one official company representative responded back saying that according to its engineers, they have no plans for the Crosshair VII HERO to support the Ryzen 5000-series CPU lineup.

“I am writing this email to provide you an update about your ongoing case. According to our engineers, We have no plans for the Crosshair VII Hero to support the Ryzen 5900X, please purchase Crosshair VIII Hero and any Ass (ASUS*) B550 motherboard that will support Ryzen 5900X and 5000 series processors.” coming via Reddit.

We don’t know for sure whether other AIB board partners will follow suit or not, but as of now ASUS plans to drop support for Zen 3 on its 400-series chipset boards. The ASUS rep even advised the said user to purchase an X570 or B550 chipset-based motherboard for proper compatibility with the Zen 3 CPU lineup.

Dropping support makes little sense since AMD has already provided its board partners with the necessary BIOS firmware/code to enable support. This means ASUS users currently rocking the 400-series chipset boards will be left with no other option than to upgrade to the X570 or B550 chipset-based motherboard, if they want to use any of the Zen 3-based CPUs.

However, there are slight chances that ASUS might enable support afterwards, when the 400-series motherboards will be receiving the first beta BIOS release in January 2021.

This article will be updated if more official confirmation comes directly from ASUS (because sometimes company reps also pass on false information, in some cases).

Most of the AMD motherboards are outfitted with 128 megabit (16 megabyte) BIOS chips. Since most motherboard models have 16 MB storage and the CPUs can only address the first 16MB of any BIOS chip, then there might an issue where the 400-series motherboards are going to have two BIOSes.

Let’s suppose a motherboard vendor had a larger BIOS chip, say e.g. if ASUS had a 32 megabyte chip, then it would actually operate like two split partitioned BIOSes, and this can also get very complicated. But there is no other simple way to support every AM4 processor with a simple 16MB BIOS.

Previously, according to AMD, the company said that it ran into some of the ROM size limitations, when trying to push the new AGESA microcode for all the older gen CPUs. As per AMD, the flash memory chips that store the BIOS have capacity limitations, and not all AM4-based motherboards feature a dual-BIOS chip design (which is mostly found on the more expensive and high-end motherboards).

AMD has given permission to ODM partners like ASUS, MSI, Gigabyte, Dell, HP, Lenovo, and others to enable this feature, however, it will be up to the ODM partner to actually implement it.

The chipmaker actually had a change of heart and is now going to offer Zen 3 support on the feedback they have received, and have thus decided to enable support on the AMD B450 and X470 boards once the right BIOS is installed.

One Table courtesy of AnandTech showing the motherboard support options, when the Zen 3 5000-series nomenclature was not confirmed before by AMD. 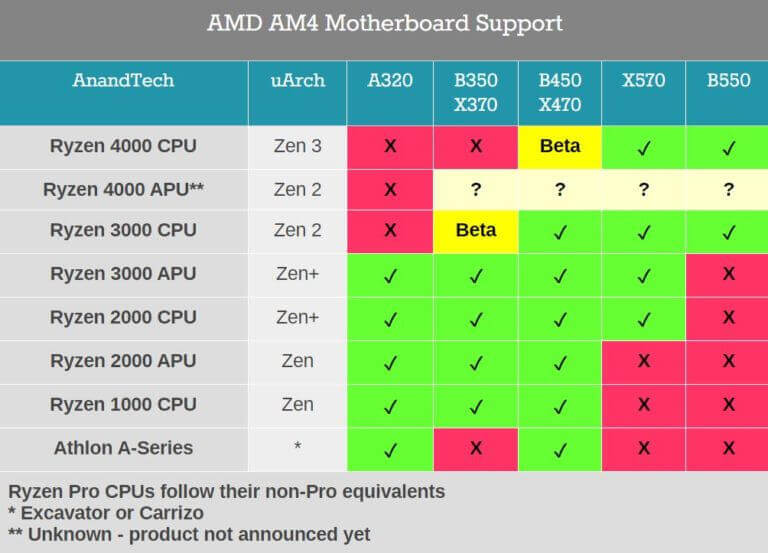 In a statement to ComputerBase, ASUS has debunked these claims. The company stands to support the Ryzen 5000 series CPUs on X470 and B450 chipset Motherboards. As of mid-November, AMD’s partners will receive the first AGESA codes, and beta versions are expected to be ready by January.

“The ComputerBase editorial team did not blindly adopt the message in this case due to its explosiveness, but held consultation with the manufacturer. Asus Germany, on the other hand, reacted immediately and asked directly again at the headquarters in Taiwan whether any changes had been made to the previous plans. The answer: no. As planned, Asus Support will also provide support for Zen 3 on X470 and B450.

The support representative provided incorrect information in this case.”