You know what? This whole Prey 2 thing is getting out of hand and at this point I’m really wondering who the hell is right on this? All evidence hint at Arkane Austin being behind the reboot of Prey 2, but why the hell is not Bethesda admitting it? But let’s take things from the beginning. Yesterday, RockPaperShotgun reported that Arkane Austin is not working on Prey 2.

As Dishonored’s co-creative director, Raphael Colantonio, told RPS when he was asked about Prey 2:

“No. We’ve been looking at where that rumor came from, and I really don’t know.”

Bethesda’s Pete Hines also claimed that Arkane had nothing to do with Prey 2 and everything seemed settled, until Kotaku came. The big K provided new evidence, and it is almost certain that Arkane Austin is working on Prey 2 – despite the fact that both Arkane and Bethesda want to avoid admitting it.

Kotaku has published some internal e-mails from Raphael Colantonio in which Colantonio – the same person who denied Arkane Austin working on Prey 2 – admitted that Prey 2’s reboot is being handled by Arkane Austin, that it will be influenced by System Shock, and that the internal team should not comment on this story at all.

You can view the leaked e-mails below. 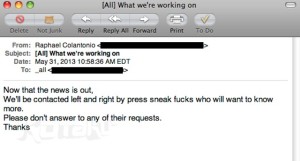 So yeah, this whole situation is a bit weird. Who is right on this? Is Arkane Austin working on a reboot to Prey 2? Why is Bethesda lying if that’s the case? Is Bethesda trying to avoid any legal problems with Human Head Studios, as that studio was responsible for it in the past?

So many questions, so few answers. Oh, and we agree with Ian Malcolm’s line about Bethesda’s and Arkane’s public statements (if those e-mails are the real deal).