Zol.com.cn (chinese website) has leaked some slides from AMD’s upcoming Catalyst 14.1 Beta driver. According to the slides, this new driver is expected to hit the Internet in Q1 2014 and will come with Mantle support, as well as numerous frame pacing enhancements.

Although there is no ETA as of yet, we expect to see this driver popping out soon after – or before – Battlefield 4’s Mantle patch gets rolled out. 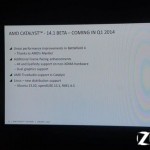 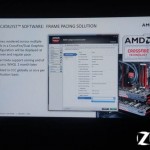